How to get a blank name in Among Us 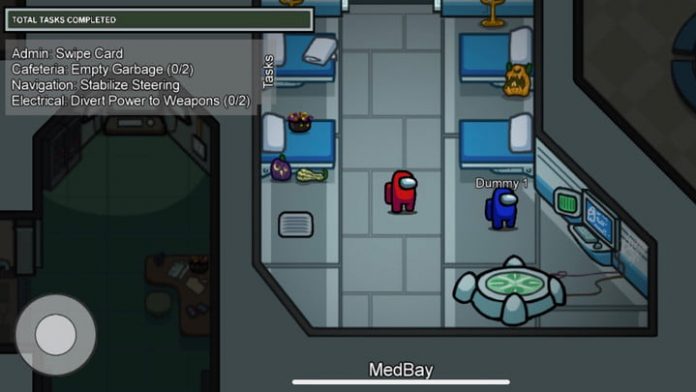 When it comes to killing crewmates while avoiding suspicion, imposters need every edge they can get. That’s why many Among Us gamers used a simple trick to have an invisible name during games, in order to make it harder for other players to identify which person is committing crimes.

Unfortunately, in the midst of writing up our guide, developer InnerSloth patched out the ability to use the trick during online games, flagging blank names as “inappropriate” and disabling the option for PC gamers to copy and paste a blank Unicode symbol.

However, certain Among Us game modes still allow you to use the trick, which means you may still want to know how it works. Here is our step-by-step guide for getting a blank name in Among Us on PC, iOS, and Android.

Among Us doesn’t allow you to use only spaces in your character name, nor leave it blank. Try to hit Create Game or Find Game, and the empty box will shake disapprovingly at you. However, there is a Unicode character, Hangul Filler, that appears as blank space but makes the game register the presence of text, allowing you to start a game.

For mobile Among Us gamers, the trick remains fairly simple to execute:

We’ve placed the Hangul Filler Unicode between these two quotation marks: “ㅤ”. Tap and hold in between the two, then tap the Copy pop-up that appears.

Boot up Among Us, and choose either Local or Online. You’ll see the blank field where you can enter your character name.

Tap inside the field, which will open up your phone’s keyboard interface. Tap again inside the white field; if you copied the Unicode already, you should see a Paste pop-up option. Paste the Hangul Filler, then tap Done.

Congratulations! You now have a mysteriously blank name that will baffle the competition. Yet as we mentioned above, only some of Among Us’s game modes will allow you to use it.

Specifically, you can use it during Local games with other players on the same Wi-Fi network, or during Freeplay as you practice your tasks. Try to join or host an online game, even if it’s private, and InnerSloth will block you.

How to get a blank name in Among Us on PC

Originally, this trick was simple: You could copy the Hangul Filler Unicode, then paste it in the character-name field. However, the developers blocked pasting in-game, and there’s no easy way to type Unicode with a keyboard, so we had to get creative. We owe the following workaround to YouTuber Gameboy Six 6328, who found a relatively simple way to edit your Among Us character name.

1. Give yourself an Among Us name

If you haven’t done so already, download Among Us, enter any play mode, and give yourself a name. You’ll need a placeholder there in order to modify it.

2. Open up your Local Disk folders

Exit Among Us and open up your local files on your desktop. You’ll need to open up your Users folder, then enter whichever User folder has the username you use to log into your PC.

3. Open up your appdata

You’ll need to search through a hidden folder in order to progress. Next to your username in the address bar, type “/appdata” and hit return, which will bring you into the AppData folder. Inside that, open the LocalLow folder.

You’re nearly to the goal. Open up the Innersloth folder, where you’ll find game files for Among Us. Right-click the PlayerPrefs file, select Open With, and choose a text editor like Notepad to open the file.

Now it’s time for some truly easy hacking. Before a string of numbers and true-false statements corresponding to your player settings, you’ll see your placeholder name where it says Not Sus for us. Now, copy the Hangul Filler Unicode, which we’ve once again placed between two quotation marks: “ㅤ”.

(Note: In some browsers, the Unicode isn’t visible, making the quotes appear to have nothing inside them. If this is the case, copy the two quotation marks; the Unicode will be inside it, and you can simply delete the extra marks after pasting.)

Navigate back to Notepad, delete your current name, and paste in the Unicode. Save and close the file.

6. It’s time for anonymous Among Us

Once you reopen Among Us, you’ll see an empty space where your name should be! Click inside the field, and you’ll see that the text cursor is off-center, next to the invisible Unicode.

As we’ve previously mentioned, however, you won’t be able to use your invisible name online unless InnerSloth decides to patch it back in. For now, you can only play Among Us with an invisible name in either Local or Freeplay mode.

We only bring up this last example because most Among Us users play online and will be disappointed that they can no longer use this trick. But it is technically possible to get a blank name in Among Us, without any hacks or even intending it to happen.

While playing in a private Among Us game with friends, we were surprised to discover that my character was completely invisible to the group in the waiting room, both the name and the crewmate itself. Once the game started, the glitches continued. Some players could only see my crewmate avatar as a series of question marks, while on other screens it was visible but the wrong color. Regardless, once a dead body was discovered and the discussion began, my character name wasn’t visible.

Ultimately, the lack of a visible name helped me avoid suspicion during kills and pull off a successful Imposter run. The weird resulting victory screen is visible above.

We haven’t been able to consistently replicate this glitch, but it appears to be related to the timing of when your character enters the room compared to the host. In essence, you may luck into having a blank name in Among Us without having to do anything.