Home How to Fortnite season 4 week 14 challenge: Delivering a semitruck to Stark Industries
How to 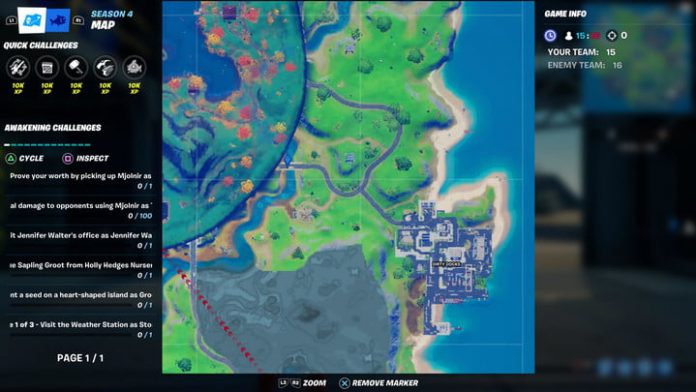 The latest set of Fortnite XP Xtravaganza challenges are live, but one of them seems to be giving players a lot of trouble, particularly because it’s broken in its current state. The one in question is a challenge for delivering a semi from Upstate New York to Stark Industries. The main reason it isn’t working is that the only semi in the area is undrivable in most modes like Solos, Duos, and Squads, meaning you can’t complete the challenge.

Epic Games has acknowledged this issue but has assured the community that it can still be completed in Team Rumble, which we have corroborated. In this guide, we’ll show you exactly how to complete this challenge in Fortnite.

In its current form, this challenge is broken in all modes except for Team Rumble. Even in Team Rumble, there’s an extremely low chance of the semi being drivable, as most matches will spawn the yellow boots on the truck’s wheels. Head to the bridge on the southeast portion of the giant circle known as Upstate New York, and you’ll usually find a truck waiting for you — though it usually won’t be usable. Check the map above for reference.

Due to an issue, the XP Xtravaganza Week 4 Challenge: &quot;Deliver a Semi Truck from outside Upstate New York to Stark Industries&quot; can only be completed in Team Rumble at this time. We'll provide an update when we have more information. pic.twitter.com/OhPWdFnFbM

Deliver the semi to Stark Industries

The problem is that in most matches, the truck won’t be drivable, and if this happens, you’ll need to quit out and try again. We imagine Epic Games will be fixing this, as well as the ability to complete the challenge in all other modes. It took us around six games or so for the drivable truck to spawn. Just look for the yellow boots on the truck’s wheels, and if you see them, quit out. If the drivable truck spawns, all you need to do is hop in and turn it around, then drive up the slope to reach Stark Industries.

In the video above, you can see us completing the challenge, along with the correct path to take. Try not to drive the truck into the rift that spawns behind it, as this will send it into the air and will likely destroy the vehicle upon landing, making it unusable. Take the path behind the truck, and stick to the right side, past the chest, and up the slope on the right that leads up to Stark Industries. From here, drive directly toward the objective, and you’ll complete the challenge right when your vehicle arrives. You should have plenty of gas to reach your destination if you don’t deviate from the recommended path.