Home How to Fortnite season 4 week 11 challenge guide: Visiting all locations in a...
How to 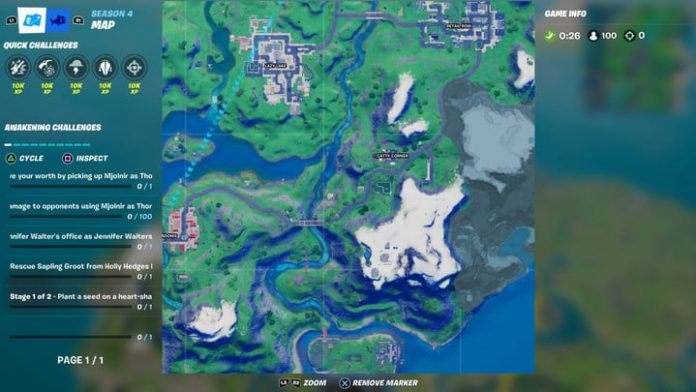 Fortnite has just launched its XP Xtravaganza, offering a handful of weekly challenges that — you guessed it — give you lots of XP. The first set of challenges, as part of week 1, are relatively straightforward, but some might cause you a little trouble. One specific challenge requires you to visit all 17 named locations on the map in a single game. This one is particularly troublesome because the storm can easily sweep you up before you have a chance to visit each location.

Though, even with the storm, there is an easy way to complete this challenge, and we’ll show you how — including a recommended route, as well as tips and strategies to make it easier. Here’s how to visit all named locations in a single match in Fortnite.

How to visit all named locations in a single match

There are a couple of ways to do this, but the most straightforward method is to fly to each location in a helicopter. It’ll take a lot longer, but at least it doesn’t require coordination with a team — which, let’s be honest, is hit or miss most times. The idea is to land at a secluded location by a helicopter spawn. We recommend landing at Catty Corner on the southwestern side, where you’ll find a helipad. We like this location because it’s typically pretty empty, meaning you’re less likely to run into enemy players. Of course, there are other choppers you can use, but this one is the safest and is on the outer edge, which should be prioritized.

Use this helicopter to fly from Catty Corner to Lazy Lake, then Retail Row, and then take a look at the storm to plan your path from there. The nice thing is that you don’t have to get out of the chopper to get each area to register. Simply fly overhead and wait for the game to give you credit. From here, plan your path accordingly based on the storm. You’ll want to hit the outer areas first — the ones closest to the storm. You’ll almost always reach the inner locations like The Authority or Salty Springs toward the end since those are closer to the center of the circle. Areas like Coral Castle and Dirty Docks might be visited first, since they’re often closest to the edge of the storm. However the storm is forming, prioritize the outer locations first. This way, you can get them out of the way before the storm covers them.

However, your path might look slightly different depending on the storm. Here’s a video of us visiting all 17 in a single match:

You’ll notice that even with the storm coming dangerously close to us, we still managed to visit all locations in time. It took around seven minutes to visit them all. The other important thing to note is that you should absolutely be boosting your helicopter the entire time. Press Circle on PS4, B on Xbox One, or A on Nintendo Switch to boost. You’ll also notice that you get credit for locations your teammates have visited within the same match.

With that in mind, the other strategy you can use is to have your entire squad of four split up into groups to tackle the entire map. Send one person to each quadrant of the map (preferably to a helicopter if possible). Then, you’ll be able to complete the challenge much faster, without running the risk of being overtaken by the gas. Again, this method is harder to execute because you have to coordinate with a whole team. So if you’ve got a few friends, this one should be easy for you.

Otherwise, you’ll need to do it yourself using the method described above. Take notice of areas your team has already visited if you’re doing this one solo. That way, you can skip them and save time, hopefully getting you closer to all 17. Once you visit all 17 named locations within the same match, you’ll complete the challenge and gain 50,000 XP.