HomeHow toFortnite season 4 week 11 challenge guide: How to use 10...
How to

Fortnite season 4 week 11 challenge guide: How to use 10 rifts 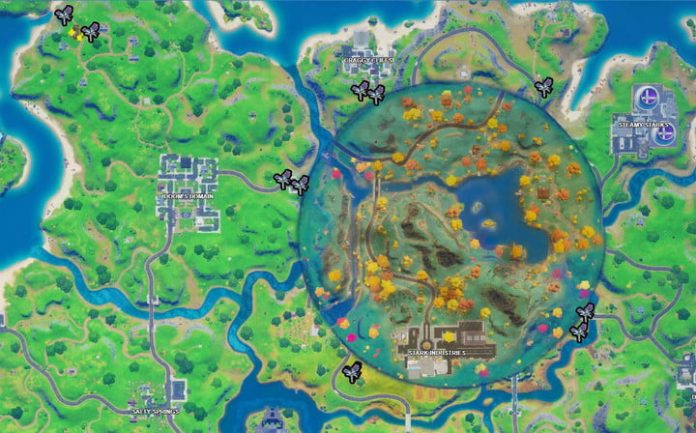 Fortnite‘s XP Xtravaganza is underway, and with it is a new set of challenges that will award you with lots of XP upon completion. For week 1, there’s a challenge that requires you to use rifts, though it’s not as easy as it sounds. You might be familiar with rifts — these are portals scattered around the map that spawn you in the sky, allowing you to glide to a new destination with ease. There are a limited number of rifts around the map, making it quite tricky to complete this week’s challenges quickly.

However, we’ve got the scoop on how to effectively make use of the rifts to complete this week’s challenges. Here’s how to complete XP Xtravaganza’s week 1 rift challenges in Fortnite.

How to use rifts

To make the most out of this week’s challenges, you’ll want to know how rifts work. When you utilize one, it will spawn you above it, and if you’re quick enough, you can free fall into it a second time. This is imperative to making the most out of the rifts around the map. To get a second use out of a rift, you’ll want to push the stick forward as you free fall while waiting for the game to automatically deploy your glider.

If you manually deploy the glider, it’ll likely be too soon, and the rift will disappear before you reach it. It can be really tricky to actually get a second use out of a rift, so practice a bit and get a feel for how much time you have before it’s gone. If you do miss it on the second pass, there are plenty of rifts to go around, but it’ll take longer if you only use each rift once. From what we’ve seen, some rifts don’t allow a second use and will disappear after you pass through them once.

For this week’s rift challenges, there are three stages for you to complete:

Keep in mind, you must visit the game’s main menu before starting the next stage. For instance, if you get your last rift of stage 1 in a match, you can’t immediately start stage 2 within the same match until you back out to the main menu. It’s unlikely you’d be able to complete all stages in one match anyway, so this isn’t too big of an issue. You must at least play three matches — one for each stage to complete all of the stages. However, the second stage for driving vehicles through rifts will likely take you a few matches, so be prepared for that.

Finally, we recommend that you attempt these challenges in Team Rumble, as you’re able to respawn if you die and are able to deploy your glider even after landing. This makes getting to the rifts around Upstate New York much easier, especially if you jump from the higher level.

This is the easiest out of the three because your progress carries over across multiple games. In the image above (thanks, Fortnite.gg), you can actually see where all the rifts spawn in a certain area. There are nine that spawn all around the exterior of Upstate New York (the circle around Stark Industries). If you use the method described above, you can get two uses from each rift — amounting to a possible 18 rifts in total. Again, it’s tricky to get a second use from each rift, but it’s possible if you zoom in after spawning in the air.

If you can’t get a second use out of the rifts, there are a few options to the northwest of this location. Check out the interactive map at Fortnite.gg for the full list. Once you’ve got 10, head back to the main menu, and you’ll be able to start the next stage.

Use 10 rifts with vehicles

This is an expansion of the previous stage. We advise you to land by a vehicle around Upstate New York or Misty Meadows and make your way to the nearest rift. In most cases, you’ll need a ramp to reach the rift with the vehicle, so make sure you’re looting and gathering resources to build with. Since you don’t have to pass through 10 rifts with a vehicle in one match, you can take your time and go to the ones that are convenient for you. Just make sure you keep gathering wood so you can build a ramp up to the rift. After you’ve got 10, you can move onto the final stage. Much like many of the harder challenges, your whole team will gain credit for passing through rifts, so you might get lucky and make progress without doing anything.

Use 10 rifts in a single match

The final stage for using 10 rifts in a single match is much more difficult for obvious reasons. The method we recommend is to land at one of the rifts around Upstate New York and make your way around the circle while doing your best to get multiple uses out of each rift. At the bare minimum, you should be able to get a few rifts in this area and possibly all nine — assuming no one else is going for rifts (which can’t be guaranteed).

After you’ve exhausted all rifts around this area, head to the rifts to the northwest by Coral Castle, and then finish up in the middle of the map to the east of Weeping Woods. If you have a teammate who’s willing to help, they can drive you around in a helicopter while you jump out and use the rifts. The nice thing is that passing through a rift will count across the entire squad, so another effective method is to split up and hit various sections across the map to make it more efficient.

Stage 3 isn’t impossible by any means, but it will require knowledge of the rifts’ locations, some luck, and possibly a cooperative squad to help out. After you’ve completed stage 3, the challenge will be finished, and you can move on to any other challenges you might’ve missed.