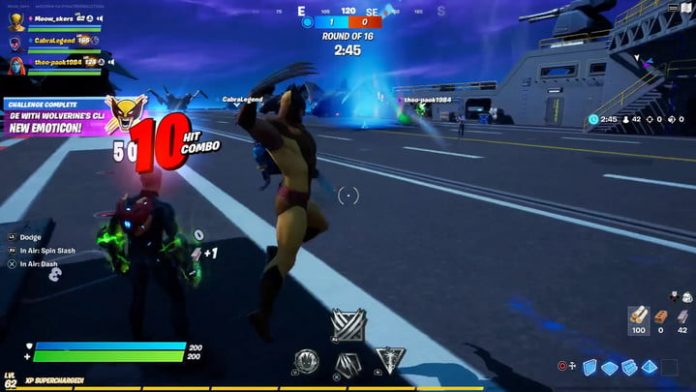 Fortnite is mixing things up, this time hosting an XP Xtravaganza. This marks a new set of challenges that all award you with a significant amount of XP upon completion. One challenge that might be tripping you up requires you to eliminate opponents by using superpowers. The game doesn’t specify how to do this, so we’ll cover everything you’ll need to know about it in this guide, including tips and tricks to make it easier for you.

Here’s how to use superpowers to eliminate enemies in Fortnite.

How to use superpowers to eliminate enemies

The easiest way to go about this challenge is to boot up a Marvel Knockout match. This pits trios against one another who all spawn in with random superpowers. Depending on the powers you get, this challenge can range in difficulty, but even if you don’t have the best luck, you can still rack up eliminations. If you aren’t confident in your abilities, you’ll be happy to know that even eliminations made by your teammates will count toward your total, so you can play a support role and still complete this challenge.

For us, we had better luck using long-range powers, like Iron Man’s blasts. We sometimes would spawn in with Wolverine’s claws, which are only effective at close range. If you happen to get this, you’ll probably have a harder time gathering eliminations, and you might have to rely on finishing off opponents who are already damaged. You’ll also usually get a high damage power that’s mapped to the right shoulder button (R1 on PS4, RB on Xbox One, and R on Nintendo Switch). Try to be at least somewhat familiar with the various powers so you’re prepared when you attempt this challenge. Here’s a video of us gaining an elimination with Wolverine’s claws:

We got kind of lucky with the elimination above, due to the enemy being AFK, but you can at least get the gist of how its done.

The main thing to note is that XP Xtravaganza features multi-tiered challenges, offering XP for each stage you complete. In this case, there are three stages you need to overcome: Eliminating one enemy with a superpower, followed by three, and finally, seven. Unfortunately, you can’t get all 11 eliminations in a single match. You have to either finish a match or back out to the main menu so the first stage will register before the game will let you begin the second stage, and so on.

In other words, you can gain credit for stage one, immediately back out and boot up another match, gain credit for stage two, back out again, and finish up stage three. Because of this, you’ll have to play at least three matches in order to complete the challenge — possibly more if you don’t manage to complete one stage per match. At least your progress is cumulative, meaning your eliminations will save and you can pick up where you left off in a new match.

Since Fortnite is a living, breathing game, sometimes Marvel Knockout is not be available. If this is the case, you’ll have to attempt it in a regular mode like Solos, Duos, or Squads. To gain a superpower in these modes, you’ll need to take out one of the various heroes/villains around the map. These are characters like Iron Man, Wolverine, or Doctor Doom. We advise to take out Doctor Doom, as he’s the easiest character to defeat. You might want to let your team know you’re going for this challenge so they can help you take down the hero/villain.

Nonetheless, after they’re down, they’ll drop a superpower that corresponds to them. Equip it, and you can then use it to take down enemies. You’ll probably notice that this method is a lot harder to actually pull off eliminations with superpowers, since it requires so much more effort and features so many more variables.

Because of that, we recommend making a beeline for this challenge in Marvel Knockout as soon as you can, so you won’t have to worry about that mode disappearing. Either way, once you’ve completed all three stages of the challenge by eliminating 11 opponents, you’ll be all set.

Facebook
Twitter
Pinterest
WhatsApp
Previous articleFortnite season 4 week 11 challenge guide: Visiting all locations in a single match
Next articleSamsung One UI 3.0 (Android 11): All the new features you need to know