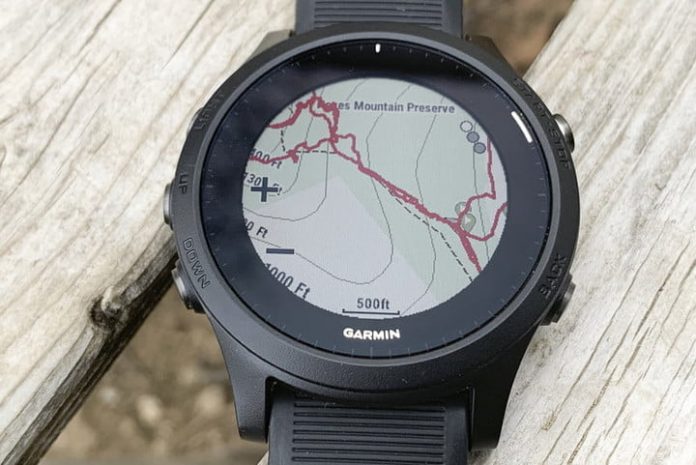 Most smartwatches now cater to fitness enthusiasts and anyone who wants to keep an eye on their health. However, not all of them focus specifically on running, with some offering more jogging-oriented features than others. We’ve rounded up the best running watches available right now, from those that are pretty much all about running, to those that also offer a broader range of smartwatch features.

So whether you’re a die-hard runner out every day, or someone who enjoys a bit of casual running, there’s a running watch for you.

The Garmin Forerunner 945 is one of the most complete running watches you can possibly find right now. It looks great, but it also comes with a wide range of sensors, including an optical heart rate monitor, a barometric altimeter, a pulse oximeter, a compass, a gyroscope, an accelerometer, and a thermometer. GPS tracking helps you track distance and pace with considerable accuracy, while more serious runners will be happy to see metrics on altitude and heat acclimatization. Aside from its comprehensive running features, it will also monitor your sleep and stress levels, while the Garmin Coach app will offer you training and workout help. You can also customize the always-on display to suit your tastes, as well as add up to 1,000 songs for streaming over Bluetooth. It’s also worth pointing out that its battery life is very strong, with a single charge being capable of lasting two weeks.

Yes, the Apple Watch Series 6 may be the best all-purpose smartwatch you can buy right now, but it’s also one of the best for running. Replete with its own highly accurate GPS, its always-on display also lets you track your running time, distance, and speed. Another nice feature is that it automatically detects workouts and runs, so if you head off for a jog without starting up a session yourself, it will notify you anyway. One small downside is that, compared to more running-specific smartwatches, its battery tends to wear down a little more quickly when using GPS and the always-on display. Still, it’s a great watch if you want to use it for other things beyond running, while the built-in heart monitor and ECG sensor also provides deeper insight into how your body responds to runs.

While the more recent Fitbit Versa 3 and Fitbit Sense may be better options if you want a more feature-packed and multipurpose smartwatch, there’s little doubt that the Ionic is the Fitbit of choice if you’re focused mostly on running (and fitness more generally). It comes with a built-in GPS and pulse monitor, while also tracking distance covered, your steps, calories burned, and hours slept. As a bonus, its battery last as many as four days, and it can also store more than 300 songs, if you’re the type of runner who needs a shot of musical adrenaline. For anyone who needs extra motivation, the smartwatch sends you notifications when you’ve been sitting for too long and even offers personalized workouts. It’s still arguably the best fitness-focused watch Fitbit has produced, even if it has been superseded by other models when it comes to being an all-around smartwatch.

Polar makes a number of excellent running watches, including the Polar Grit and Polar Ignite, but it’s the Polar Vantage series that’s the best if you’re really serious about your sport. The Vantage V2 is the latest in this line, being the follow-up to 2018’s Vantage V, and it’s possibly the smartwatch of your dreams if you happen to be a competitive runner with an obsession for data. The watch provides users with personalized workouts to help you improve your fitness levels, while new advanced performance tests will help you learn just how far you’ve progressed. These tests evaluate heart rate, VO2 Max, aerobic speed, and your running power. There’s even a leg recovery test, which lets you know just how well your muscles are recovering after workouts. If this weren’t enough, it boasts up to 40 hours of GPS tracking, can track sleep and calorie intake, and weighs only 52 grams (about 1.8 ounces).

Suunto also manufactures the less expensive Ambit3, but if you have a bigger budget and are set on having the best possible running watch, the Suunto 9 is the way to go. It claims a staggering 120 hours of GPS running life if you put the watch into power-saving mode, while it also comes with a bevy of features for running (and cycling and swimming). These include the tracking of time, distance, pace, calories burned, cadence, altitude, ascents, and descents. The watch also comes with a very useful heart-rate monitor, which tracks your average and maximum heart rates, and also your PTE (peak training effect) and EPOC, which is essentially a measure of how much extra oxygen your body needs to recover from a session. It has been known to have an occasionally fiddly interface, but for anyone who needs the maximum possible battery life and extensive data, it’s one of the best on the market.

Having released the Pace in 2018, Coros returned in late 2019 with the Coros Apex, a smartwatch focused on runners and triathlon athletes. Equipped with GPS, it lets you view a variety of metrics while you run, including your pace, distance, heart rate, elevation, inclination, and other pieces of info viewable on its five switchable data screens. The heart rate and GPS data is as accurate as pretty much any other running smartwatch out there, while the Apex’s battery life is also very good, covering around 35 hours in GPS mode and about 30 days in normal use. It may be a bit limited in other features, so it really is only for runners and triathletes, but its attractive price point makes it possibly the best value-for-money running watch available right now.

While we featured the more expensive Forerunner 945 at the top of this list, the Garmin Forerunner 45S is an excellent choice for anyone who wants a running watch without having to spend a significant chunk of their monthly salary. It’s basically a slightly pared-down version of the 945, featuring an optical heart-rate sensor and a built-in GPS. It will track your pace, cadence, VOT Max, distance, calories burned, and intervals while you’re out running, while its 14 hours of battery life (in GPS mode) means you can jog for a long time without having to go back home for a recharge. Other nice features include a range of workout apps for running, cycling, and other sports, as well as features for tracking your sleep and stress levels.