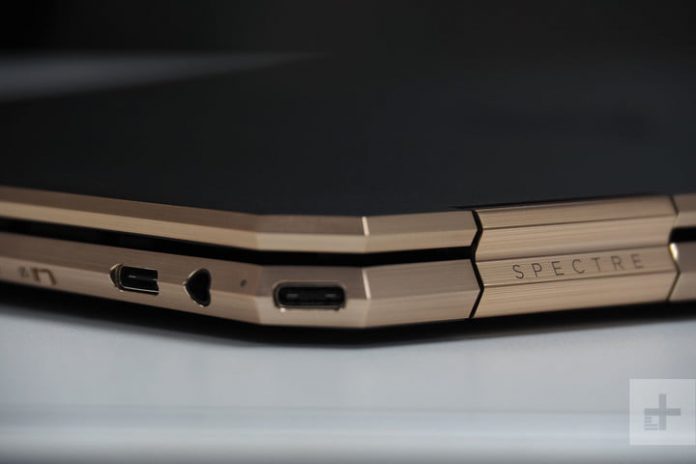 In the past, Apple’s MacBook Air was the definition of a thin and light laptop with an awesome keyboard and a great battery. Today it faces much stiffer competition.

Today, you have a mind-numbing selection of options, especially in the 13-inch class where the MacBook Air plays. It received an overhaul in 2018 that made it significantly more modern, but does it still have what it takes to beat out-stunning new 2-in-1s like the HP Spectre x360 13? Read on to find out.

The revised MacBook Air is familiar, yet far more modern than its predecessor. Its chassis is thinner, lighter, and sports smaller bezels, making it look more like it belongs in 2020 instead of 2012. It’s just as elegant and conservatively attractive, coming in gold, silver, and Space Gray colors. The overall design hasn’t changed significantly since then, only the underlying hardware.

The current Spectre x360 features a “gem cut” iteration that has angles everywhere, catching the light. You can get it in Natural Silver, Nightfall Black, or Poseidon Blue. Either way, it’s a look that definitely stands out more so than Apple’s laptop.

Both are solidly built, sporting an all-aluminum chassis that’s rigid and suffers little flexing or bending. The MacBook Air is thinner than the Spectre x360 at 0.63 inches versus 0.67 inches. It’s also lighter at 2.8 pounds versus 2.88 pounds.

Input matters as well. The latest MacBook Air equips Apple’s new Magic Keyboard, first introduced in 2019 on the 16-inch MacBook Pro. After several attempts to resolve the issues surrounding its butterfly switches, Apple turned to scissor-style switches and hasn’t looked back. Meanwhile, the Spectre x360 includes one of the best keyboards you’ll ever find on a laptop, with deep and spacious keys.

One major point of divergence, however, is HP’s touch display that supports an active pen for Windows Ink. The MacBook Air does not have a touch screen, nor does it support the Apple Pen.

Connectivity is another point of divergence. The MacBook Air doubles down, literally, on USB-C with Thunderbolt 3, offering two of those ports and nothing else. The Spectre x360 also has two USB-C ports with Thunderbolt 3, but it also supports legacy devices with a USB-A 3.1 port, and it has a microSD card reader for storage expansion and compatibility with cameras and external accessories without an alternative connection. It’s all the benefits of Thunderbolt 3 without the inconvenience of needing dongles for older peripherals.

The MacBook Air uses 10th-generation Intel Ice Lake two- and four-core processors. The Spectre x360, on the other hand, uses a different set of 10th-generation CPUs but also has configurations with 11th-generation Tiger Lake chips. You’ll see faster performance on the Spectre x360 that better handles more demanding productivity and content creation tasks. You’ll need to jump up to the MacBook Pro to find a worthy opponent.

The MacBook Air’s PCIe solid-state drive (SSD) is faster than the one fueling the Spectre x360. That doesn’t mean the HP is slow at accessing and saving data, but this is the one performance metric that’s in Apple’s favor.

Typically, MacBooks offer the best displays with the widest and most accurate colors, the highest contrast, and the most brightness. Unfortunately, the MacBook Air is an outlier here, with merely average display performance provided by its Retina 2,560 x 1,600 resolution panel.

With the Spectre x360 Full HD model we reviewed in early 2019, we found it was roughly equal in terms of colors and brightness, but it offered a much higher contrast ratio. At the same time, HP installed Intel’s 1-watt screen, which uses about half the power of the typical display. You’ll see the results of this later on in the battery comparison.

Lastly, the Spectre x360 model we reviewed in late 2019 had a 4K AMOLED display. It was sufficiently bright at 405 nits and excelled in color, supporting 100% of sRGB and 98% of AdobeRGB. And because the screen was OLED, the contrast and black levels were better than anything we’ve seen in a long while.

You won’t notice either of these laptops in your backpack. They’re equally portable, and therefore a great option for anyone whose work isn’t anchored in one place. However, size and weight are only two portability considerations.

Battery life also matters. In our web browsing test, the Full HD version of HP’s Spectre x360 13 from early 2019 lasted 12 hours and 45 minutes. The 2020 MacBook Air followed behind with 9.5 hours, and the late 2019 Spectre x360 with the 4K AMOLED screen finished last with less than six hours.

In our video loop test, the Full HD model lasted 17 hours and 36 minutes, followed by the MacBook Air at a mere 10 hours. HP’s 4K AMOLED review unit nearly matched the Air with 9.5 hours.

Overall, the Spectre x360 model with a Full HD display is one of the longest-lasting laptops we’ve ever tested, and that makes the more meaningfully portable laptop.

The most affordable MacBook Air costs $1,000. It comes with a Core i3 processor,  8GB of RAM, and a 256GB SSD. With the lower price, improved keyboard, and double the storage, it’s not a bad deal, especially if you own an iPhone, iPad, and/or Apple Watch. If you want more performance, the $1,299 model may be a better choice.

Mac fans will no doubt prefer the look, feel, and multi-device unification associated with the Air. But if you’re a bit more agnostic, there’s really no reason to settle for it. The Spectre x360 is more powerful, longer-lasting, and has 2-in-1 functionality. It wins on nearly every level.