These are the best 4K TVs for your Chromecast Ultra 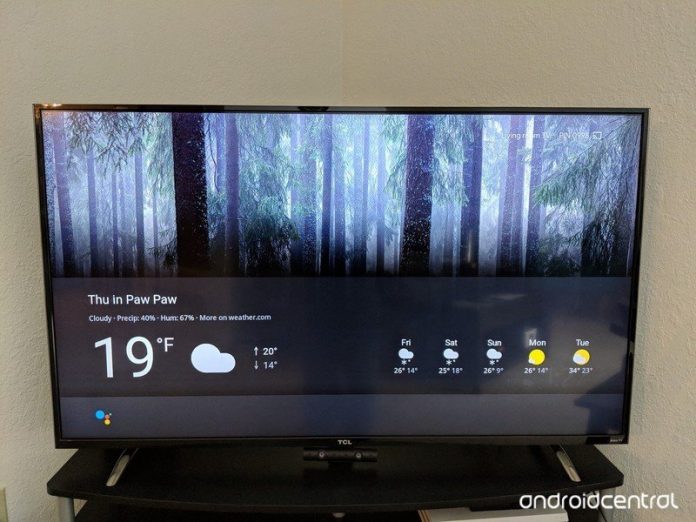 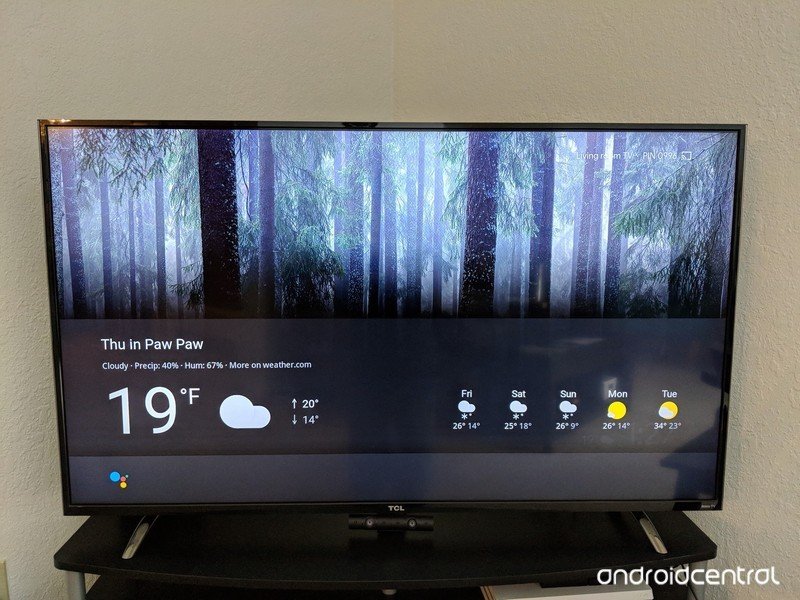 A TV is usually a major purchase for any entertainment setup, especially when you’re looking for one that can display in 4K and HDR. The Chromecast is a great streaming device to get the content you love at the highest resolution and dynamic range, but you need a TV that supports the standards as well. The LG CX 4K Smart OLED TV is a beautiful screen that fits in everywhere, with great variances in size, and a feature set that is perfectly ideal as the best 4K TV for Chromecast. 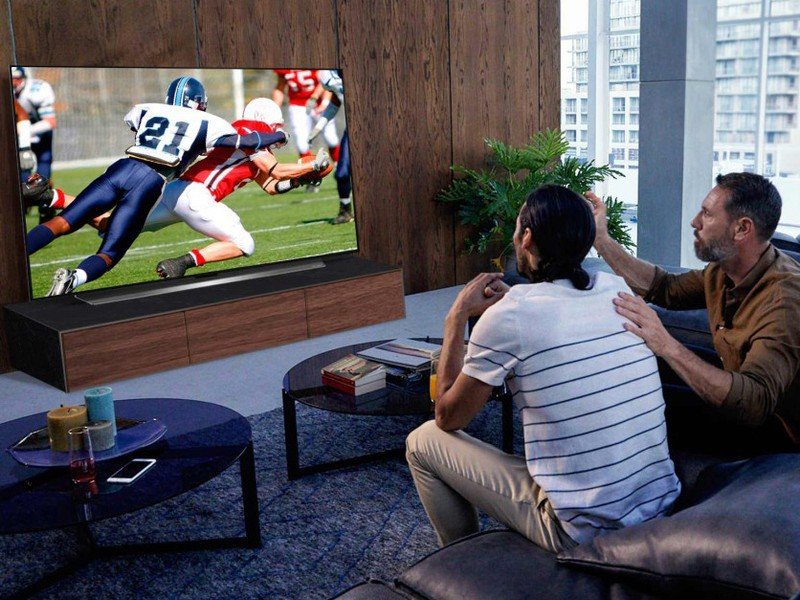 LG’s OLED TVs are a thing of beauty. They bring nearly perfect blacks and vivid colors with incredibly sharp images and crystal-clear motion. If you want a top-notch TV, look no further than the LG OLED. They come in sizes from 48-77 inches, and all come complete with Amazon Alexa and Google Assistant built-in, plus Dolby Atmos sound, Dolby Vision, HDR10, and HLG for 4K HDR content.

There’s more where all that came from. LG’s CX series has the Alpha a9 III processor powering everything inside, including the smart TV features, like webOS and ThinQ AI. LG also equipped it with the expected ports, throwing in an HDMI 2.1 for some futureproofing. You also get a Filmmaker Mode to display content in ways that creators intended when they master it in a studio, which goes along with several other viewing options, some of which you may need to experiment with if you put this in a room with changing lighting conditions.

It’s also built to handle gaming with low latency — a mere 1ms response time and 120Hz refresh rate — ensuring you don’t have to sacrifice that to get this TV. While you do get Dolby Vision, you don’t get HDR10+, the main competitor. The TV is amazingly thin at under 2 inches deep at its thickest point, so you do need to be careful handling it. But it will look so flush and pretty when mounting it on the wall. 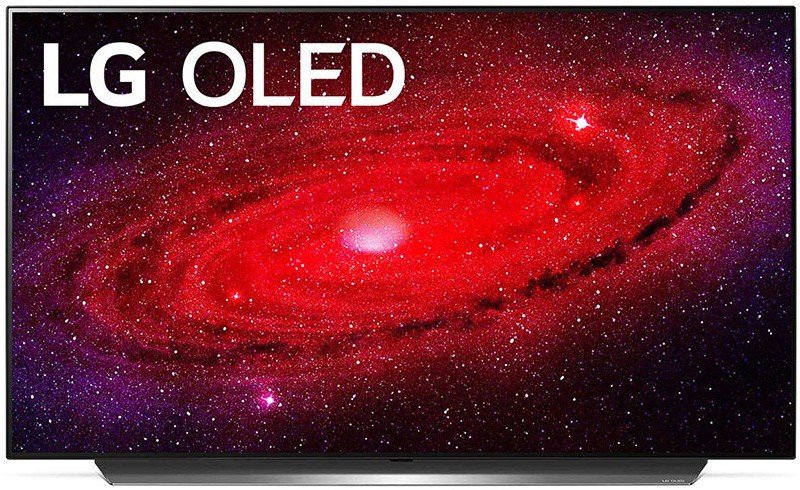 Hard to look away from this screen

LG makes this OLED TV easy to watch and appreciate, thanks to an excellent combination of image quality and features. 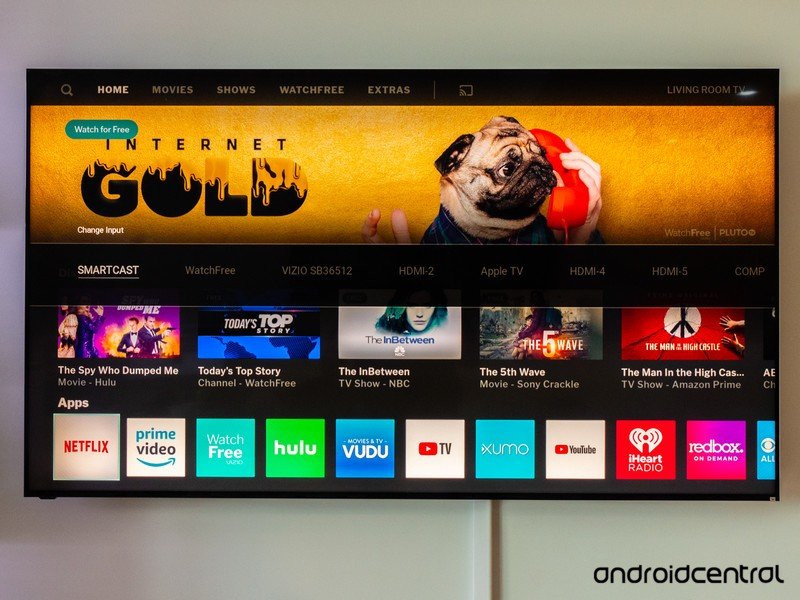 Vizio’s P-Series TVs strike a perfect balance between quality and price, continually proving to be the best value in the business. For $1,200, you’re getting a 65-inch LED with 4K HDR, Dolby Vision, and the typical slate of apps. It even has built-in Chromecast support if you don’t want to plug in a separate dongle.

Support is wide-ranging beyond all that. You get HDR10+ and HLG formats and 200 locally-dimmed zones in the backlighting that brighten and darken based on the content on screen. While it won’t match what an OLED can do, it does close the gap enough to make this LED TV appear more brilliant than you might otherwise expect. It will even recognize black bars from ultra-wide content and darken them completely.

With eARC and HDMI 2.1, the TV supports Dolby Atmos, but also comes with DTS Virtual X built-in to its own internal speakers. The refresh rate goes up to 240Hz, and with a gaming mode, hooking up a console should lead to some intense moments when playing your favorite titles. 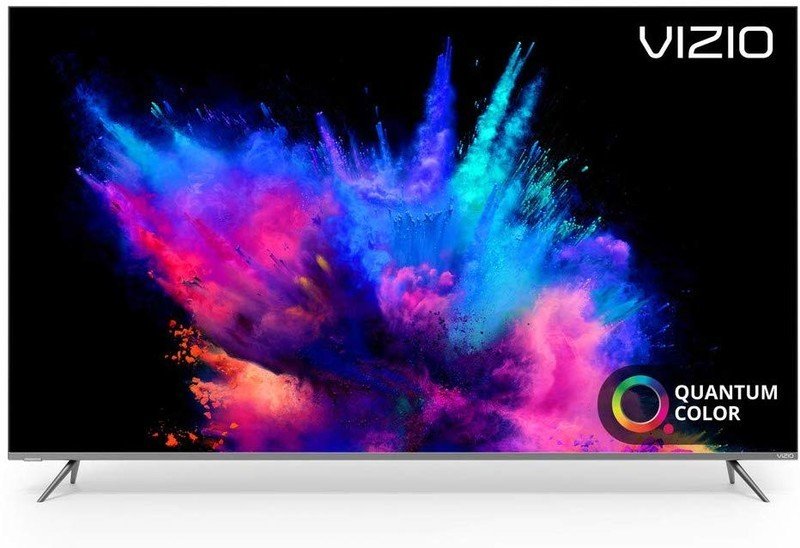 Watching what you want without the hassle 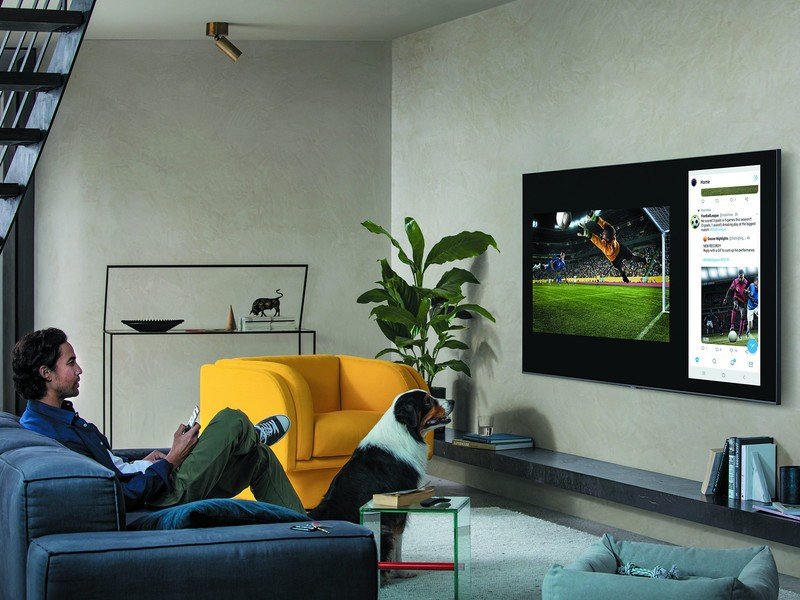 Perhaps you have some money to burn and you want one of the best TVs available today. You might want to get a Samsung QLED TV. Not to be confused with OLED, QLED is an LCD-based technology that uses quantum dots for a stunning picture and fantastic response times. You’ll pay more than a good mid-range panel of the same size, so you need to really commit to this.

Let’s put this in some perspective. This TV comes in four different sizes, from 55-85 inches, and in each case, the starting price is lower than it was with the previous model when it came out in 2019. While Samsung did cut down on the LED dimming zones and got rid of the One Connect Box, there’s still plenty to like for the money you’d spend. You will have to consider the onboard connections when wall-mounting it because the box handled all that, leaving only one cable to go to the TV. The same goes for a Chromecast, depending on whether you’re plugging it in via the onboard USB port or to a power outlet nearby.

Picture quality is superb with just about anything you watch, and that includes gaming, where input lag is a mere 10ms and includes Freesync variable refresh rate (VRR) support for future consoles. Speaking of which, there is an HDMI 2.1 port, plus eARC. Unfortunately, there’s still no Dolby Vision available, as is par for the course for Samsung who prefers HDR10+ and HLG formats instead. 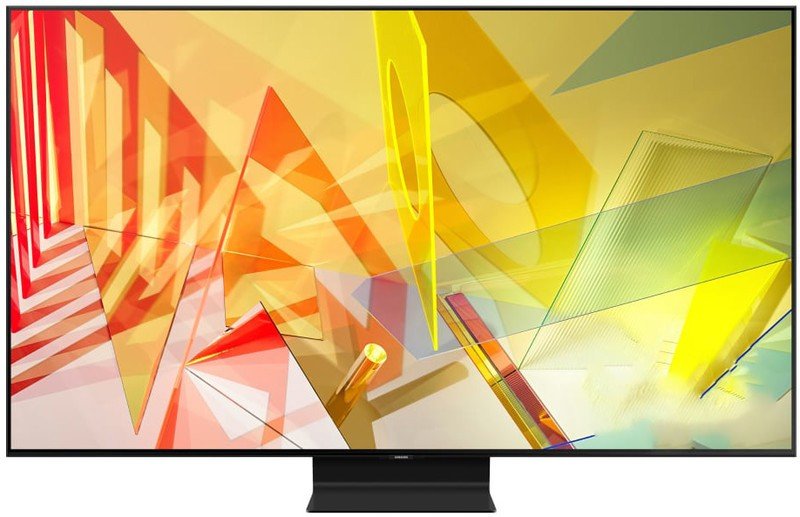 QLED maintains its position as an LED master

At a better price than previous models, Samsung’s QLED offers great balance in size, performance and features that’s easy to like. 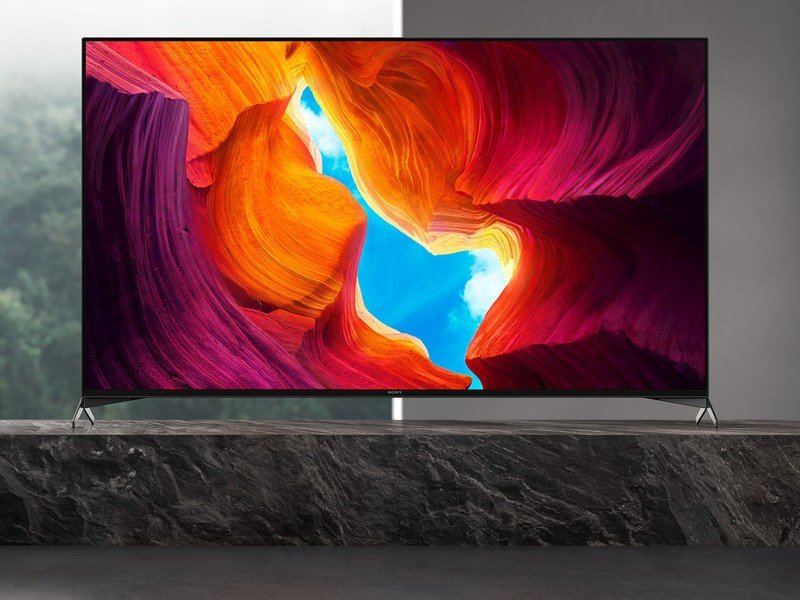 Sony’s X900H series strikes a good balance between cost and performance. The 55-inch set is cheaper than most of the other big brand names, and the quality is just as good. You can go as big as 85 inches.

Being a “mid-range” TV would make you think you lose out on a lot of features, but this may be one of the best Sony models available when you factor in everything involved. Picture quality is amazing for something in this range, with color accuracy that arguably does better than more expensive TVs. It does have a reflective panel that looks better in more dimly-lit environments, but when you are in the right conditions and viewing angles, you will appreciate the vibrancy available from Dolby Vision and Dolby Atmos, among other things.

It also looks like Sony put the upcoming PlayStation 5 into the mix with features coming in a future firmware update. It will give the TV HDMI 2.1 and VRR support that should be important when playing games on that console. And last but not least, is Android TV, probably the best smart TV interface around right now. The best part is that means you get a built-in Chromecast, too. You can always upgrade that by plugging in future models when Google comes out with them though. 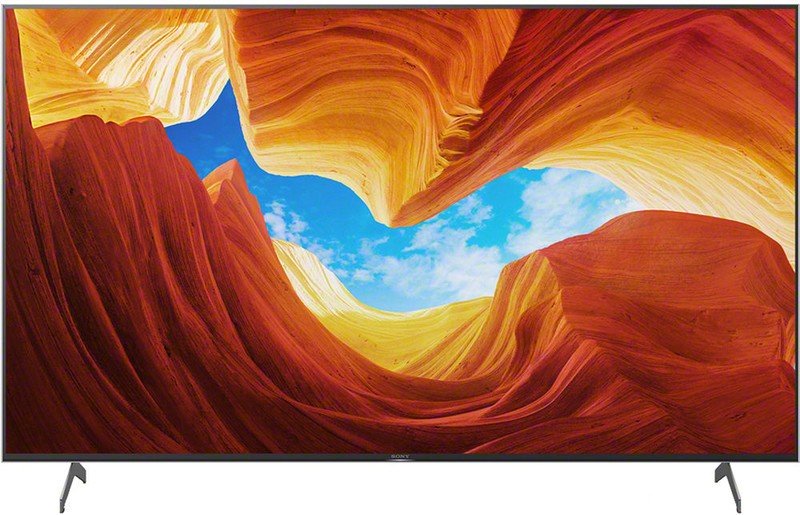 A TV that looks better than you might expect

Sony has a TV that not only looks great out of the box but is also set to support key features for next-gen console gaming. Samsung’s 7 Series TVs aren’t the cutting-edge QLED panels that make all the headlines, but they get the job done and provide fantastic value in a 4K HDR TV. You can pick up a 55-inch and even get a 65-inch all for a lot less than many of the other options on this list.

So, why is there such a price discrepancy compared to the company’s other TVs? For one thing, this TV doesn’t have all the bells and whistles, like a wider color gamut, wider viewing angles, and peak brightness. Despite that, there’s a fair bit to like here, starting with six different sizes to choose from. You get Alexa support out of the box, plus Samsung’s Tizen interface for access to supported streaming apps. Plug in a Chromecast, and then you can cast over whatever content you like, including even mirroring your Android phone screen over.

It’s just worth noting that the TV is at its best in dimly-lit rooms that aren’t big, where viewing angles are largely more acute. The 60Hz refresh rate should be higher, especially for gaming and sports, but you could still have a lot of fun playing on this TV. The only issue is that it doesn’t support HDMI 2.1 and VRR, so don’t get this with futureproofing in mind for next-gen consoles. Samsung lowers the price of entry for a TV

When money is an object, a mid-range TV available in different sizes can be a nice bargain to view content with. TCL makes solid TVs and does so at incredible prices. You don’t get a ton of frills, nor will you get the absolute best picture, but we’re talking about a 43-inch 4K TV for so much less than the other options here. This may not be the best choice for your living room, but for other rooms in the house or as a starter set to get into 4K, it’s a great choice.

Unlike TCL’s 5 or 6-Series TVs, the 4-Series is mostly about convenience at an entry-level price. You still get the Roku TV interface included, so it’s a smart TV out of the box. That means you have access to all the popular streaming apps available on the platform without having to splurge for a streaming box to do the same job. Plus, you can still do private listening through the Roku mobile app. Plugging in a Chromecast expands content options further, putting more wireless functionality in your hands through your phone or tablet.

Easy to set up and place in a room that won’t be your primary viewing area, this TV is pure bang for the buck. However, you put the money down for something that won’t give you the best picture quality. More advanced features, like local dimming, eARC, faster refresh rates, and bolder color reproduction aren’t on hand here.

Best on a Budget TCL makes buying a TV cheaper than ever

A bigger TV screen on a really tight budget isn’t out of reach through TCL, so long as you’re cool with the trade-offs involved.

Put together a Chromecast Ultra or Chromecast with Google TV, plus the right streaming service on a 4K TV, and it’s going to a look a whole lot better than an older 1080p set. But just how good it looks will depend on the model you choose and the size.

Any of the TVs on this list will get the job done and wow you with their picture quality, but the best 4K TV for Chromecast through a balance of price and amazing quality is the latest LG 4K Ultra HD Smart OLED TV. You’ll still be paying a lot of money for it, but you get basically everything you’d want in a TV, so it’s absolutely worth it. You’ll typically be paying more for 4K, but because 4K is just about everywhere these days, you don’t have to spend an arm and a leg to get it. Ted Kritsonis loves taking photos when the opportunity arises, be it on a camera or smartphone. Beyond sports and world history, you can find him tinkering with gadgets or enjoying a cigar.