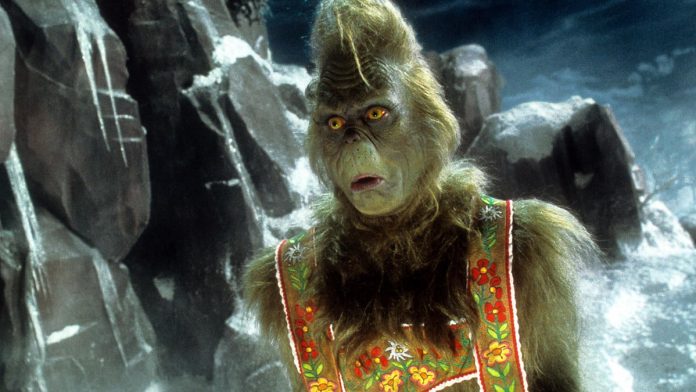 Christmas films are timeless holiday benchmarks. Renowned classics like A Christmas Story and National Lampoon’s Christmas Vacation never feel their age (both films are almost 40 years old now!), and no matter how many times we’ve seen them, we keep coming back. The best part about Christmas movies is that you can watch them any time of year, too.

There are so many Christmas movies to choose from, from those that have holiday cheer sprinkled all over them to ones with just a touch of Christmas spirit. Here are some of the best ones you can stream on Netflix whenever you’re in the mood, including animated classics, cliched romantic comedies, and nontraditional Santa stories.

How The Grinch Stole Christmas (2000)

With Anthony Hopkins as narrator, Jim Carrey as the lead character, and Ron Howard as director, it’s no wonder that this fantasy comedy film, based on the 1957 Dr. Seuss book of the same name, is a must-watch during the holiday season, or any time of the year, really. The Academy Award-winning film (for Best Makeup) tells the known tale of the surly Grinch who hates Christmas. But then he meets a young girl from Whoville named Cindy Lou who helps teach him the true meaning of Christmas. It’s a touching tale with memorable performances from Carrey, Jeffrey Tambor, Christine Baranski, Molly Shannon, and Taylor Momsen as Cindy Lou.

What screams Christmas more than ’80s action star Kurt Russell manning an enchanted sleigh? That’s right, in director Clay Kaytis’ The Christmas Chronicles, Russell plays the man himself, jolly Saint Nick, and he’s got some holiday troubles to deal with. When Teddy and Kate (Judah Lewis and Darby Camp) put a trip wire and camera in place to prove Santa’s existence on Christmas Eve, they catch the gift-giver in their living room. Darby follows him to the roof and hides in his sleigh, along with Ted. When they reveal themselves, a startled Santa teleports to Chicago, where his sleigh breaks down. On top of no flying gear, Santa’s magic hat and bag of Christmas gifts are gone. It’s up to Russell and his two ride-alongs, Kate and Ted, to retrieve the artifacts before Christmas spirit disappears.

Admittedly, the film’s plot plays a bit like an extended third act of Jon Favreau’s Elf, another Christmas classic, but screenwriter Matt Lieberman’s The Christmas Chronicles is packed with enough laughs, action, and heartwarming holiday cheer to stand proudly on its own two legs. For those who really love the film, there’s a sequel on the way. The Christmas Chronicles 2 will see Russell and the kids returning, and there’s a new director at the helm, Chris Columbus, the director of the renowned holiday classic Home Alone.

Receiving rave reviews, this traditionally animated adventure comedy film tells an alternate story of how Santa Claus came to be. Set in the 19th century, Jesper is a spoiled and lazy postman’s son whose father sends him on a mission in a distant northern town as a last resort to help him change his ways. While there, he meets a reclusive toymaker named Klaus. With a top-notch voice-acting cast that includes Jason Schwartzman as Jesper and J.K. Simmons as Klaus along with Rashida Jones, Will Sasso, Norm MacDonald, and Joan Cusack in supporting roles, the movie earned Netflix its first Academy Award nomination for an animated film.

This cute British comedy is about Steve, a former getaway driver who, after being paroled, discovers a man claiming to be Santa in his shed. Desperate to find his missing reindeer, Santa, after being sent to prison himself due to a misunderstanding, pleads with Steve to help him. Steve is reluctant, but his young son Tom urges him to help the man he truly believes is Santa. If Steve misses his parole hearing, however, he’ll be sent right back to the slammer alongside St. Nick. What’s a guy to do? It’s a nontraditional Christmas film, but if you’re looking for something a bit different, it might be worth a watch. It has its criticisms, mostly due to the cheap reindeer flatulence jokes that will undoubtedly have the kids giggling. But at its core, the cast headed up by Jim Broadbent as Santa and Rafe Spall as Steve makes it a worthwhile watch for some real belly laughs.

If you’re tired of the same old Hallmark Christmas movies but want a good romantic comedy, check out this one that has already spawned two sequels: A Christmas Prince: The Royal Wedding and A Christmas Prince: The Royal Baby from 2018 and 2019, respectively. The story is about an aspiring young journalist named Amber who is sent to cover a press conference about a prince who is about to take the throne following the death of his father. She is told he’s an irresponsible playboy, but after being mistaken for his sister’s tutor, she gets to know the real him and, surprise, surprise, she falls for him after discovering that he’s not at all who people think. It’s totally predictable, but sometimes that’s just what you want from a Christmas film.

“I know you are, but what am I?” It doesn’t matter that several decades have passed. You’re really taken back with this Christmas Special that sees the childlike character, played by Paul Reubens, singing, dancing, and doing silly things with stars from back in the day like Frankie Avalon, Annette Funicello, Grace Jones, k.d. lang, Little Richard, Oprah Winfrey, Zsa Zsa Gabor, Cher — the list goes on. It’s something you can watch with the whole family, introducing the kids to the quirky humor and Pee-wee’s signature laugh while enjoying a twinge of nostalgia.

This romantic comedy was oddly better viewed by critics than audiences. Based on the young adult novel of the same name by Maureen Johnson, John Green, and Lauren Myracle, the movie has a star-studded cast that includes Kiernan Shipka, Joan Cusack, and Isabela Merced. It’s Christmas Eve, and as Julie struggles with earning a scholarship to a prestigious university and the need to care for her ill mother, she happens to meet a rising pop star named Stuart on a train. They strike up a friendship with a clear romantic interest in one another. The movie is described as being “comfortably cliché” with its influences worn right “on its sleeve.” But that’s kind of what you want from a Christmas-themed film, right?

‘Tis always the season for the low-key comedy genius of Bill Murray. This 2015 Christmas musical, directed and co-written by Sofia Coppola, follows the titular Murray through a star-studded Christmas Eve of celebrity duets and bountiful drinking. Bill’s holiday odyssey kicks into gear when a live TV special he was due to host is sabotaged by a power outage. Relieved, Murray flees to the Carlyle bar, where the film’s major slew of Hollywood cameos start filtering in, including Maya Rudolph, Rashida Jones, Jason Schwartzman, Michael Cera, and more. In terms of plot, it’s not the most emotionally dense Christmas movie, but A Very Murray Christmas is sure to grab a chuckle or two from you while filling your ears and heart with various Murray-led carols. Plus, at under an hour, it’s a quick watch. Not a bad bet, if you ask us.

From writer/director duo Jon Lucas and Scott Moore, who are perhaps best known for The Hangover series, A Bad Moms Christmas is a sequel to 2016’s Bad Moms, with both films starring Mila Kunis, Kristen Bell, and Kathryn Hahn. This time around, the band of mother buddies receives unwelcome holiday visits from their own mothers, and they must contend with the typical Christmas pressures of gift buying, elaborate meals, and not enough alcohol. Fans of the original Bad Moms may prefer the comedic chops of the first film, but A Bad Moms Christmas stands on its own two feet as a worthy follow-up, while also being a pretty decent holiday flick. If you like both films, you’ll be pleased to know that there’s currently a third in development. Oh, how Hollywood never rests.