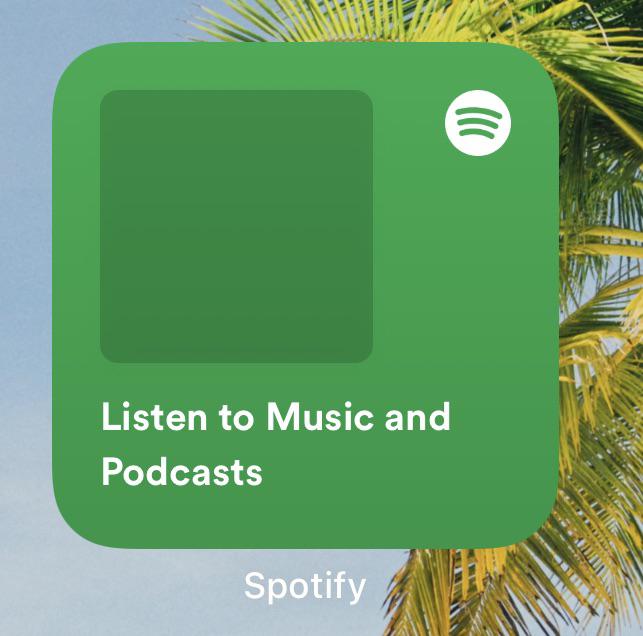 One of the big new features of iOS 14 is Home Screen widgets, which provide information from apps at a glance. The ‌widgets‌ can be pinned to the ‌Home Screen‌ in various spots and sizes, allowing for many different layouts.

Image credit: Reddit user AustinMauritz
Many third-party apps have released ‌widgets‌, and now evidence that Spotify is developing its own official widget has appeared in a TestFlight beta.

The widget is currently available in small and medium sizes, with the former designed to display the artwork of the last played artist, song, or album, while the latter size shows four of the same content elements.

Unfortunately there are no play, pause, or next song buttons, since Apple only allows ‌widgets‌ to present read-only information, with interactive elements such as scrolling elements or switches not allowed, presumably due to battery life considerations. Image credit: Reddit user Lupolo
Instead, both ‌widgets‌ include the text “Listen to Music and Podcasts,” and tapping the widget opens the Spotify app. Based on user reports on Reddit, the Spotify ‌widgets‌ don’t yet display album artwork, but the fact that they exist at all proves that Spotify is working on them.

Last month, we reported that Spotify is testing dedicated support for direct audio streaming to Apple Watch without being connected to ‌iPhone‌.

There’s no indication that the appearance of the beta feature is tied to a particular version of watchOS or iOS, but hopefully it won’t be long before the ability to stream Spotify from the wrist will be available to all subscribers.Related Roundups: iOS 14, iPadOS 14Tags: Spotify, widgets
This article, “Spotify Developing iOS 14 Widgets in Latest Beta” first appeared on MacRumors.com