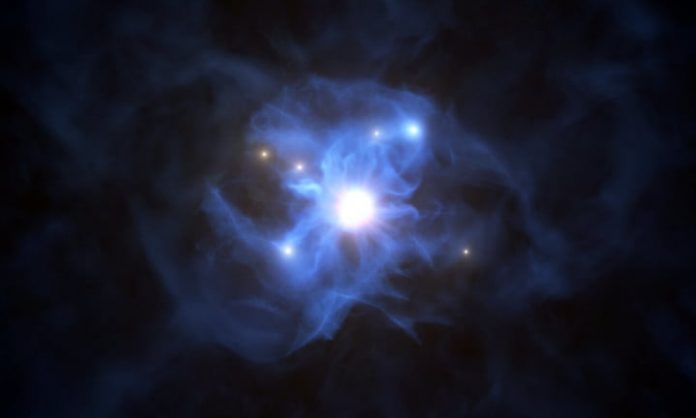 Astronomers know that at the heart of most galaxies lies an enormous monster: A supermassive black hole, millions of times the mass of our sun. But they are still learning about how these beasts form and grow to such a large size.

Now, a group using the Very Large Telescope (VLT) has found a group of six galaxies trapped in a cosmic “spider’s web” around a supermassive black hole, and investigating this oddity could help explain the formation of these colossal black holes.

“This research was mainly driven by the desire to understand some of the most challenging astronomical objects — supermassive black holes in the early universe,” lead author Marco Mignoli, an astronomer at the National Institute for Astrophysics (INAF) in Bologna, Italy, said in a statement. “These are extreme systems and to date, we have had no good explanation for their existence.”

The six galaxies are so far away that observing them is like looking back in time to when the universe was less than a billion years old. They are embedded in a web of gas, which feeds both the galaxies and the rapidly growing black hole. “The cosmic web filaments are like spider’s web threads,” Mignoli explained. “The galaxies stand and grow where the filaments cross, and streams of gas — available to fuel both the galaxies and the central supermassive black hole — can flow along the filaments.”

With the help of ESO’s Very Large Telescope (VLT), astronomers have found six galaxies lying around a supermassive black hole, the first time such a close grouping has been seen within the first billion years of the Universe. This artist’s impression shows the central black hole and the galaxies trapped in its gas web. The black hole, which together with the disc around it is known as quasar SDSS J103027.09+052455.0, shines brightly as it engulfs matter around it. ESO/L. Calçada

The presence of this web of gas helps to explain how early supermassive black holes were able to grow quickly and become so massive even when the universe was young. As for how the web itself formed, astronomers believe it could be related to the halos of dark matter which surround galaxies. The dark matter halo could have attracted gas to it, forming structures that fed both the galaxies and the black hole.

As these galaxies are so distant, the light from them that we can detect is extremely faint. It’s possible that, in addition to the six galaxies observed around the supermassive black hole, there could be even more that we can’t see, according to co-author Barbara Balmaverde, an astronomer at INAF in Torino, Italy: “We believe we have just seen the tip of the iceberg, and that the few galaxies discovered so far around this supermassive black hole are only the brightest ones.”