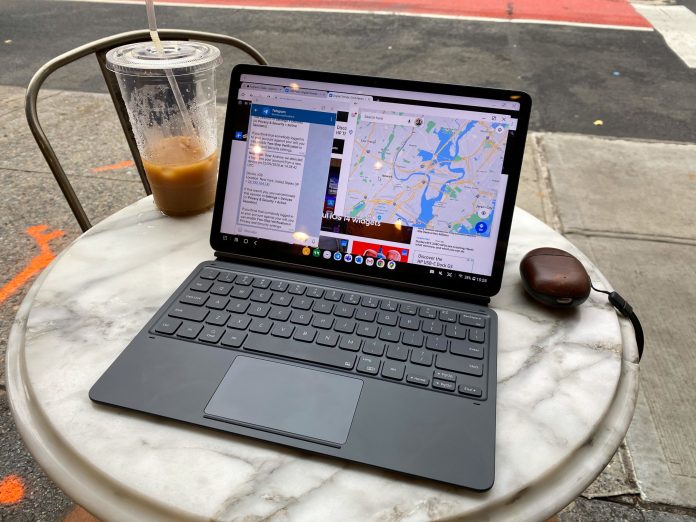 Android tablets, on the whole, aren’t good. The hardware on offer across the market is solid, the specs are strong, and the pricing is accessible and competitive. The problem is the software — most notably app support, or the lack thereof.

Samsung makes the best of this bad situation with the new Galaxy Tab S7 with myriad improvements, including its DeX desktop-style interface and windowed apps. But in many ways, the overall experience of using an Android tablet still comes up short. Very short.

I’ve been using a Galaxy Tab S7, with its optional $200 Bookcover Keyboard accessory, for a couple of weeks now. I was enticed by the smaller 11-inch form factor of the S7, versus the huge S7 Plus, for the possibility of it being a nicely portable secondary machine that I could work and type on when I had a lighter workload than my MacBook Pro was necessary for.

So in typical tech reviewer trope form, I wrote and edited this entire article on the Tab S7. I also took as many opportunities as possible to shut down my MacBook Pro or leave the house with just the Tab S7 to see how much I could really get done with it. I found a lot of good, and unfortunately a lot of bad as well, as Samsung makes the best of this bad situation.

Samsung does (almost) everything it can

Samsung gets so much right in the hardware of the Tab S7. The metal body is superbly crafted, and looks and feels amazing. It’s every bit the luxury experience that an iPad Pro is. The 120Hz display is great every way you look at it, and it’s complemented by nice, and loud, speakers. The front camera is great for video calls, and unlike the iPad is properly positioned at the top of the screen while in landscape. The battery life is exceptional, even when you push the tablet hard in DeX mode.

And you’ll be using DeX mode, because it’s the only way the Tab S7 makes sense to use as a potential laptop replacement or productivity device. I tried using the regular “tablet” interface with the keyboard connected, as I do on my iPad, and it’s rough. The vast majority of Android apps won’t scale to fit a large screen, fewer still actually change the interface to take advantage of a large screen, and some won’t even rotate to landscape. Trying to use an Android tablet for anything more than light browsing or full-screen video watching is downright frustrating.

DeX mode is the only thing that makes this Android tablet a competent laptop replacement.

DeX applies a brute-force trick by implementing windowed apps, just like Windows and macOS. Now your apps can show up in phone-sized windows that you can move around. Even the most stubborn apps, like Instagram, will pop up in a window and at least become usable. You can still make apps full-screen, and split the screen for two apps, in addition to popping up several windows on top.

The rest of the interface improves, too. You get a desktop-style dock that shows which apps are running (or were recently), and you can pin apps to stay put. Your status bar and notifications are now in the bottom-right corner. You get some desktop keyboard shortcuts, like alt+tab for multitasking, ctrl+tab inside apps, and cut/copy/paste. Everything just gets a bit more predictable — and laptop-like — in DeX mode.

All of a sudden, I feel productive. I can use a full-screen app and pull up another one to quickly send a message or read something without being taken to a huge blown-up phone app. I can open an app from a notification and have it just pull up a new window. I can use a mouse cursor with a touchpad to hit small buttons and keep my hands down on the keyboard.

While DeX can fix a lot of the endemic problems involved in using Android as a tablet operating system, it doesn’t fix everything. Forcing phone-designed apps into windows helps, but it doesn’t fully address the reality that Android apps are horrible on tablets.

There are still many apps that don’t want to be put into full-screen mode, so Samsung has to force them to do so, requiring an app restart every time you switch between full-screen and windowed mode. Other apps look fine in a window, but the window can’t be resized. Some apps simply crash when switching between size and modes.

And ultimately, most apps simply scale up content from a phone app to fill the screen — aka, everything is zoomed in, huge, and not useful. So your choice is “use a phone app in a window” or “use a phone app blown up to full screen” — pick your poison.

Samsung is doing what it can here, considering it doesn’t control the Play Store and can’t force developers to make apps better for tablets. But it makes further unforced errors that hurt the experience.

Samsung does what it can in software, but it also makes mistakes with the keyboard hardware.

I want to love this keyboard. I can’t. The typing experience is actually great; the keys have travel, yet are springy, and the layout is plenty spacious. But everything else is a mess. It attaches to the tablet with magnets, but has this wobbly faux-leather plastic strip between the connector and the keyboard that makes this setup completely unusable on your lap. Obviously this flexibility is so the keyboard can flip around to cover the screen, but it doesn’t need to be this flimsy. Why am I carrying an ultra-portable machine if I can only work on it when I have a table to set it on?

The biggest thing that attracted me to the Tab S7 was that the keyboard has a trackpad. I am, once again, disappointed. The size is fine, but it won’t let you track with one finger while resting your thumb, which is something every laptop can do. Click-and-drag works with wild inconsistently between apps, you can’t turn off tap-to-click, and you can’t change the two-finger scroll direction. These are all very basic settings you expect in a laptop. And then you get back to app support; every app deals with a cursor differently, and text fields in websites rarely work the way you’d expect them to on a proper desktop browser.

It just isn’t enough to justify this price

The Galaxy Tab S7 is $650, plus another $200 for the keyboard. $850 is a hefty price to pay for a device that feels incomplete and incapable of performing its duty as a productivity tool anywhere near the level of a laptop. Android apps are still terrible on tablets, even with a dramatically better DeX interface. The keyboard and trackpad befit a cheap Chromebook you’d find on sale at Best Buy.

Samsung is charging laptop money for a tablet that is neither a good laptop nor a good tablet.

This is the same amount you’d pay for a Surface Pro 7 with a keyboard — an actual laptop software experience in a very similar form factor. (And I say that as someone who’s far from a Windows fan.) Yes it’s a poor standalone tablet experience, but so is using any large Android tablet. And as a tablet, it should go without saying that your money is far better spent on a new iPad Air for $600; and future keyboard use can be handled with a $159 keyboard accessory — your total investment is less than what Samsung’s asking for the Tab S7 combo.

I know it seems like I’m really nitpicking on the Galaxy Tab S7. This comes down to some tough love. I want to use the Tab S7, and it gets so much right, but it’s a promise left unfulfilled. Every step of the way I’m fighting to make the Tab S7 do something it isn’t meant to; and paying way too much to do it.