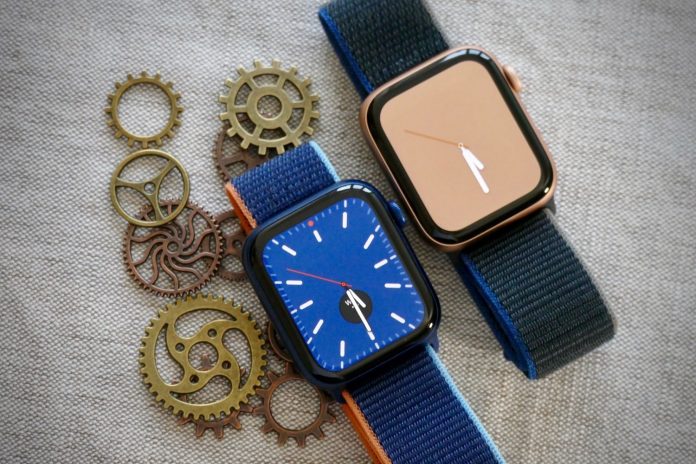 Anyone who wants to buy an Apple Watch has two clear choices to make. Will you be going home with the Apple Watch Series 6, or the Apple Watch SE? In previous years the decision about which Apple Watch to buy was almost solely based on aesthetics and budget, and deciding if you needed a cellular connection or not. This year, it’s a harder decision.

Over the past two weeks I’ve worn and reviewed both of the new Watch models — be sure to read my Apple Watch Series 6 review, and my Apple Watch SE review –giving me the chance to look past the technical differences and see if, in the real world, you’re better off saving some money or spending a bit more.

This really can’t be said enough: If you own an iPhone, don’t go out and buy any other smartwatch apart from the Apple Watch. Yes it’s tempting to go in a different style direction from everyone else, and smartwatches like the Diesel On Fadelite do turn heads, but you will absolutely regret your decision if you decide to be contrarian.

Why? The Apple Watch works perfectly with your iPhone, and other smartwatches that don’t use Apple’s watchOS software can’t integrate in the same way. That means some features are missing or won’t work, including some crucial notifications like Apple’s Messages system. What’s more, Google’s Wear OS and even Samsung’s Tizen, which is pretty good, just aren’t as highly polished, fast, or as user-friendly as Apple’s watchOS.

With that out of the way, let’s get on with finding your new watch.

The Apple Watch SE can’t measure your blood oxygen levels (SpO2) or take an electrocardiogram (ECG), but the Apple Watch Series 6 can. When it comes to wearable health trackers, we’re conditioned to think the more sensors the better, but we need to understand whether these sensors and readings will actually benefit us personally. If they don’t, do we really need them?

Take the ECG. The ECG on the Apple Watch can help identify atrial fibrillation (AFib), or an irregular heartbeat, which is a condition that could lead to a stroke if left untreated. The Watch mostly works in the background, checking your heart rhythm periodically, and will alert you if it detects signs of AFib. It has the potential to be a crucial early warning for people unaware they have a heart problem.

However, using an ECG is usually something recommended by your doctor. According to the National Health Service (NHS) in the U.K., an ECG “may be requested by a heart specialist or any doctor who thinks you might have a problem with your heart.” Johns Hopkins Medicine lists a few of the reasons you may need an ECG, including diagnosing symptoms like chest pain, checking heart health before surgery, or to check on a pacemaker’s performance.

Apple tells doctors the ECG feature, “may catch something that can provide your patients with an early indication that further evaluation may be warranted.” When the feature was introduced in watchOS 5.2 in March 2019, Apple’s VP of Health said in the press release, “With the ECG app and irregular rhythm notification feature, customers can now better understand aspects of their heart health in a more meaningful way.”

During my time wearing the Series 6, I actively used the ECG only for the purpose of the review, but left it running in the background the whole time. When you understand what the ECG does and how it could help you, it’s comforting to know it’s there, but as explained above, it’s really a specific medical tool and any results are best interpreted by a doctor.

While it’s not a strict reason to buy the Apple Watch Series 6, understanding heart health is obviously beneficial, and the ECG has been shown to return accurate readings close to those from ECGs used in medical settings. While it won’t tell you if you’re having a heart attack, it’s still incredible that an ECG — once only available in a hospital — is on a smartwatch at all, and taking advantage of its existence seems prudent.

Oxygen in your blood

It’s actually easy to sell people on the ECG feature, but the SpO2 measurement is different and doesn’t have the same ease of understanding or general appeal. Blood oxygen levels have hit the headlines over the past months because they can be used to diagnose serious complications from COVID-19, the disease caused by the novel coronavirus. This alone may lead some to automatically gravitate towards the Series 6 rather than the SE.

However, don’t be so quick to do so. Regarding COVID-19, the NHS’s guidance on monitoring blood oxygen levels involves a medical pulse oximeter that attaches to your finger, which has been recommended by a doctor. This is not the same as using SpO2 measurements on the Apple Watch, or other consumer devices that offer the feature (Garmin, Fitbit, and others have begun including SpO2 sensors). A report on the technology by the Centre for Evidence-Based Medicine is very clear in its findings: “There is no evidence that any smartphone technology is accurate for the clinical measurement of oxygen saturation.”

If it is not accurate enough to offer a medical benefit, what’s it for? Apple says the SpO2 measurement on the Series 6 gives a, “better understanding of their overall fitness and wellness,” and doesn’t go into detail about any possible specific health benefits like it does with the ECG. It does talk about working with several research projects though, which may bring greater health benefits in the future. For now, though, it’s a supplementary health measurement that’s more about recovery time after exercise than it is about preventing a serious illness.

The ECG and SpO2 measurements are silent features you’ll (hopefully) never know are there. I certainly didn’t during my time with the Series 6, and only used them for the purposes of the review. The Apple Watch SE may not have an ECG, but it still has an irregular heart rate alert provided by the heart rate sensor, the same as all previous models have had since watchOS 5 arrived.

Apple’s watch face designs incorporate unique ambient modes that draw less power but still show the time in an eye-catching way. They look excellent, giving the smartwatch on your wrist character and life, and making it more enjoyable to wear. It’s really a purely aesthetic thing, since the SE’s raise-to-wake feature is incredibly fast and reliable, it’s just the black screen looks rather boring until it springs into life when you go to check the time.

Worried about battery life? On average I found you sacrifice about half a day in battery power when using the always-on display, and that’s if you use sleep tracking overnight. I’m happy with that exchange, mostly because the new sleep tracking feature is so basic I don’t think it’s worth using. This means you turn the watch off overnight to get two full days, or charge the watch overnight anyway. Looked at like this, there’s no downside to the always-on screen, and I’d pay the extra to get it, even if it’s not essential.

Performance and other differences

Using the Series 6 and the SE back to back revealed the S6 processor inside the Series 6 is an absolute rocket, but the S5 in the SE is no slouch. It’s the same chip that powers the Series 5 watch, so it was good enough for a $399-plus model this time last year, remember. The additional speed in the Series 6 doesn’t add enough to the overall ownership experience to make it worth the extra money on its own.

Dig deeper inside the Series 6 and you’ll find the mysterious U1 chip, which uses ultra-wideband (UWB) technology for low-power spatial awareness and precise location tracking. The U1 chip is already inside the iPhone 11 range, but if you’re looking for a real-world benefit outside of improving AirDrop, you won’t find one yet. It has the potential to become very useful, with applications ranging from the rumored Apple Tag beacon to unlocking car doors, just as Apple has already demonstrated. For now, you don’t need it, but the Series 6 may remain technically relevant for a tiny bit longer than the SE because of it.

The Series 6 has a second-generation optical heart rate sensor, but the first generation version on the SE that was also fitted to the Series 5 is widely regarded as being very accurate, and I didn’t notice any difference when using the two during workouts. However, if you plan to wear the Apple Watch when running and are serious about heart rate monitoring during exercise, you may prefer having the latest sensor on your wrist.

You can get the Series 6 in blue or red, and also with a titanium or stainless steel case, or as an expensive Hermés version. The SE comes in gold, sliver, or Space Grey aluminum, but all the straps are compatible with both models, so there’s plenty of opportunity for personalization.

I reviewed the Apple Watch SE before the Series 6, so how did I feel after completing the Series 6 review, and which one would I choose to wear going forward? Although I really like the blue case and the always-on screen, I could have switched back to the Apple Watch SE and not noticed any functional difference. That decision would save me $120, without any serious impact on my use or enjoyment of the Apple Watch.

You’ll already know from the comparison above whether the Series 6’s feature advantages are relevant to you, but none are such great leaps forward that you’ll instantly regret not having if you choose an Apple Watch SE. The argument that the Series 6 will last you longer is sound, but if you’re not convinced you’ll commit to wearing a smartwatch for years, it may not be that relevant anyway, and if this is the case, a cheaper model would make more sense.

If money isn’t a concern, then knock yourself out with a blue Series 6 or a Hermés Series 6 with a double-tour leather strap, you’ll have a flashier version of the best smartwatch you can buy. But if you’re a little more shrewd, the Apple Watch SE does practically everything most people will want from the Apple Watch for a more reasonable price. It’s refreshing to say that even if you buy the cheap model, you won’t be disappointed.