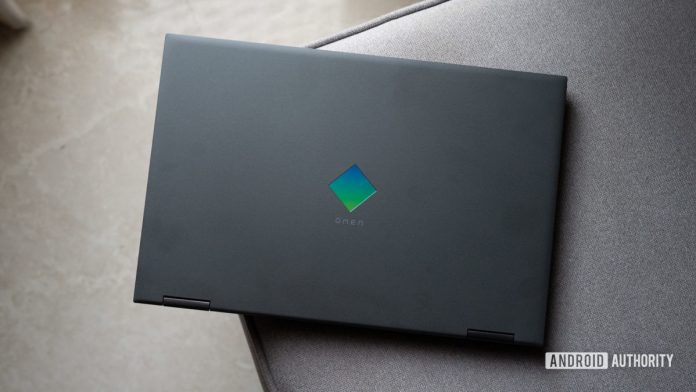 The last few years have been relatively stale in the Windows laptop space. We have mostly seen incremental performance bumps and minimal upgrades. AMD’s Ryzen 4000-series laptop processors announced earlier in March, however, are bringing the competition to Intel’s monopoly. The HP Omen 15 is among the first from the company’s portfolio to be outfitted with the powerful new chips.

Built on a 7nm process, the company promises that the Ryzen 7-based HP Omen 15 will offer more performance per watt, as well as fantastic value for money. But does the entire package live up to the promise? Let’s find out in the Android Authority review of the HP Omen 15.

About this review: I wrote this HP Omen 15 review after spending two weeks with the laptop as my primary device. The device was supplied by HP India.

Gaming laptop designs skew two ways — you can either go all-in on the gaming aesthetic with RGB lights and over the top flair or have something like the HP Omen.

I like that the blacked-out look is discrete enough to carry into a classroom or a meeting. The overall aesthetic is understated other than the gradient logo on the lid. 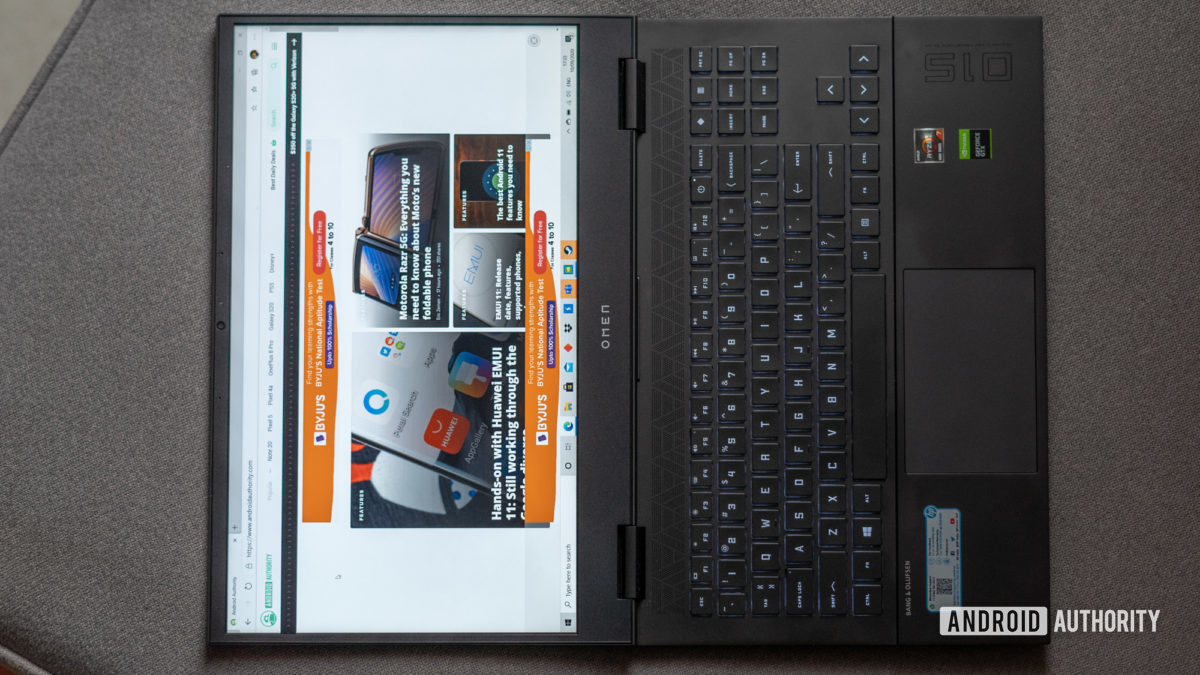 That minimalist look extends to the inside of the laptop as well. The darkened Omen 15 logo on the right of the touchpad doesn’t really stand out, and the speaker grill design isn’t particularly shouty either.

That’s not to say that everything is perfect. The choice of polycarbonate soft-touch material makes the laptop particularly susceptible to catching fingerprints and smudges. On top of that, it is surprisingly hard to clean.

I’m not too convinced by the choice of material and it might not hold up too well over months of intensive gaming sessions.

Elsewhere, the display wobbles quite a bit. While the base of the laptop is particularly solid, opening up the lid shows off quite a bit of flex. Being a gaming machine, the HP Omen 15 is a bit of a chunky boy. The maximum thickness is just short of an inch but that doesn’t factor in the protruding ventilation grills along the bottom. Additionally, weighing in at about 2.5kgs, I found it pretty cumbersome to carry around. 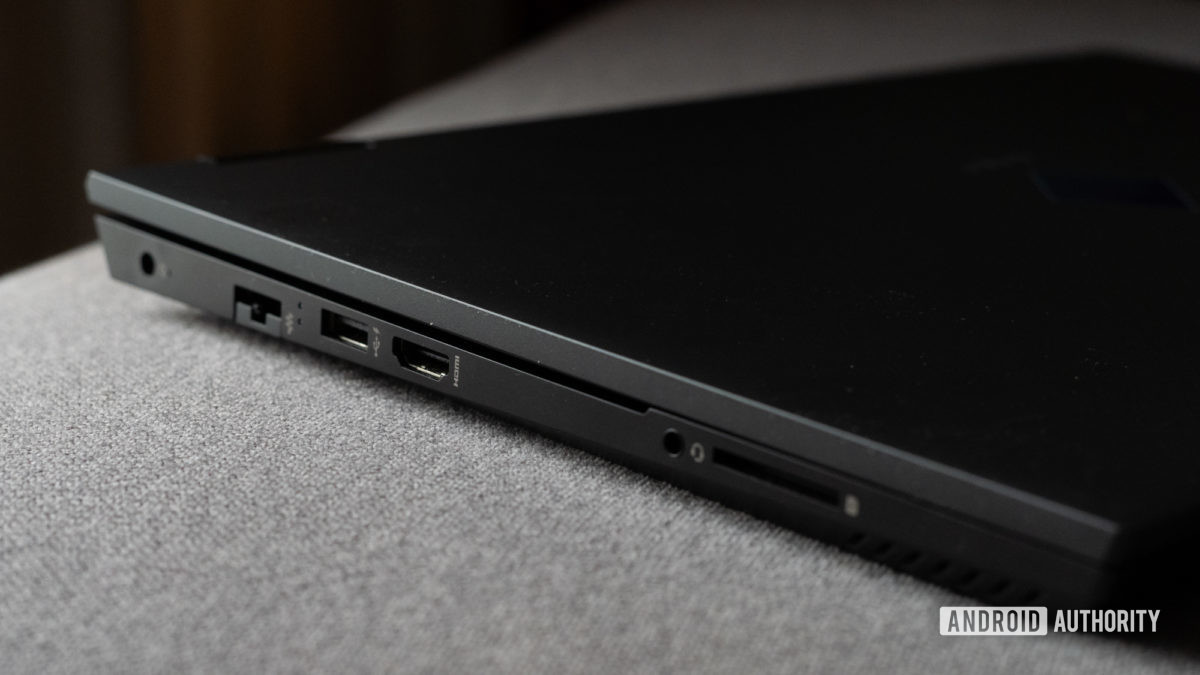 HP has, however, made good use of all that physical space, and the port selection here is pretty good. On the right are two USB 3.0 ports in addition to a mini Displayport, as well as a USB-C port that is capable of 5Gbps speeds.

The left-hand side sports another USB 3.0 port, a full-size SD card reader, an HDMI 2.0 port, as well as a pop-out ethernet port. This is accompanied by a headphone jack and a barrel port for the charger.

Overall, HP has built a fairly comprehensive piece of kit that doesn’t skimp out on ports. Lid aside, the construction is generally decent though a different choice of material would have worked a bit better.

Does the HP Omen 15 have a good display? 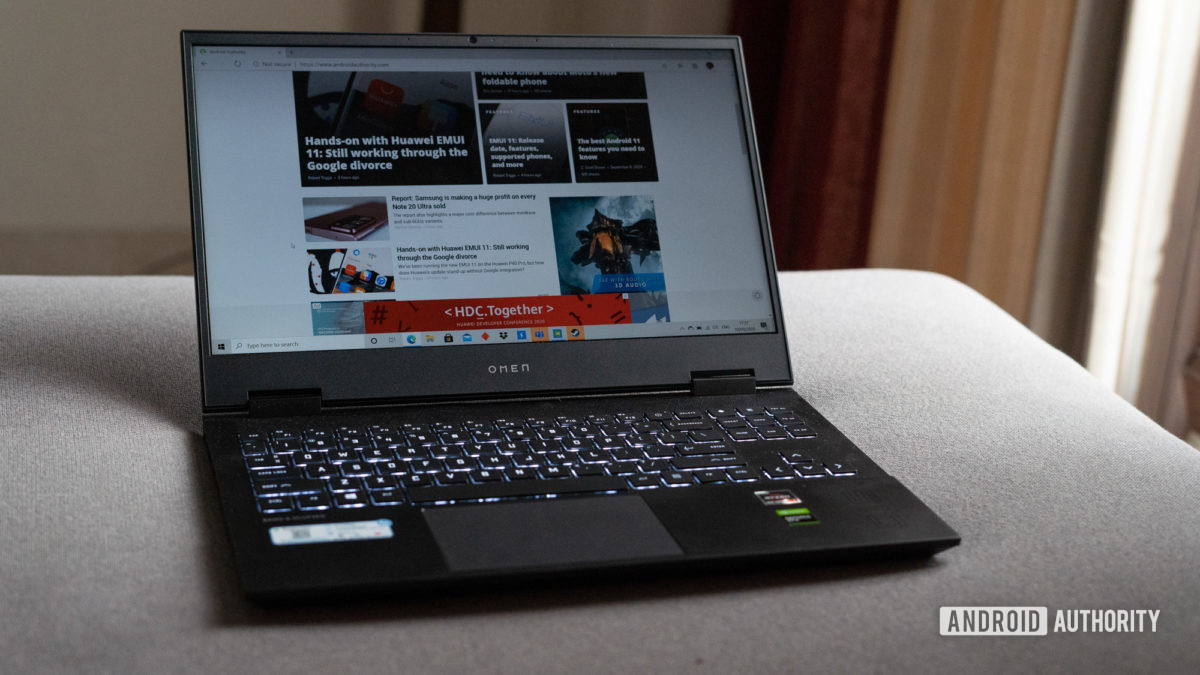 While the Omen 15 can be configured all the way up to a 4K AMOLED display, the AMD configuration we received includes a lowly Full HD panel with a 60Hz refresh rate.

The panel has fairly small bezels around three corners, but it is hard to dismiss the massive lip along the bottom edge.

The matte display works great at cutting out glare, but the display in this configuration is average at best.

The matte display bodes well for cutting out glare and visibility in sunlight,  even though I don’t expect many users will be carrying this laptop outdoors all that often.

The panel itself, in this configuration, is serviceable at best. Color accuracy isn’t great and there is a mild color shift once you push the display back. I measured maximum brightness just short of 250 nits which isn’t exceptional but it does okay indoors.  Unfortunately, lighting isn’t consistent across the panel and edges appear a bit dull, making it far from the best laptop display around.

How is the typing experience? Coming over from a MacBook, it took me a bit to get used to the offset keyboard design of the HP Omen 15. The typing experience was quite good although I observed a bit of springiness on fast typing. Laptop gamers will like the key distance on offer here. Yes, there is backlighting support too, and in higher configurations, you can even get zone-based RGB lighting to tie-in to the gaming aesthetic.

Switching over to the trackpad, the HP Omen 15 includes Windows precision drivers and it’s large enough. I had no issues with accuracy and gestures. In short, it works as advertised.

How’s the performance on the HP Omen 15? The Omen 15 can be had in a wide range of configurations. This starts from a relatively affordable AMD Ryzen 7-based config and goes all the way to 10th Gen Core i7 processors. Our tested configuration was based on the Ryzen 7 4800H paired with 8GB of DDR4 RAM and an Nvidia GeForce GTX 1650 Ti.

The Ryzen 7 4800H punches well above its weight class and is able to handle day to day tasks just fine. But that’s not what you’re here for, is it? Combined with the dedicated graphics card, it can handle popular games just fine. Games like Fortnite and Rocket League run well at Full HD, and the graphics pushed high.

However, to really test the setup, I decided to run the latest Microsoft Flight Simulator on it. The game is notorious for its high system requirements and stresses out both the CPU and GPU.

Microsoft Flight Simulator chugged along at 24 frames per second, but you should be able to push games like Fortnite and Rocket League.

As expected, the performance was pretty mixed. With the resolution set to 1280 x 720 and graphics set to medium, the game delivered a just about playable 24 frames per second. The game constantly swayed between 20 and 24 frames per second when pushed any higher.

Suffice it to say, you won’t be maxing out the settings on the latest and greatest games. Certainly not in this particular configuration. When pushed hard, the cooling fans in the HP Omen get pretty loud. Additionally, the base of the laptop is way too hot to rest on your lap without getting scorched. The keyboard, however, remained pretty cool and I could continue playing my favorite game without ending up with sweaty palms.

Is the battery life any good?

The HP Omen 15 ships with a pretty small 3 cell, 52.5 Wh cell, and this understandably translates to pretty poor battery life. With a normal workload including Slack, Spotify, and browsing, I could just about manage 2.5 to 3 hours of battery life.

Pushed hard with gaming, you will barely get about an hour of autonomy. In conclusion, you will need to carry the large 150W power brick with you everywhere. During my time with the HP Omen 15, I came to appreciate the understated design and the price-to-performance ratio. The AMD configuration paired up with the GeForce 1650 Ti makes for a decent entry to mid-range gaming rig that will suffice for popular multiplayer games.

While I like the blacked-out look, I’d have preferred hard plastics over the soft-touch material used here. I get that HP was trying to go for a premium feel, but the material attracts way too many scuffs and you will end up with a fingerprint coated machine every time you use it.

Given the size of the HP Omen 15, a larger battery wouldn’t have hurt either. If you were hoping to get work done at a cafe, you’d better have that charger on hand.

Should you buy the HP Omen 15? Look, you are most definitely paying a premium for the Omen branding here. However, HP has done a pretty good job with the configuration and the value is plenty good as far as gaming portables go.

The AMD Ryzen 7 delivers performance that belies the price point, while the graphics card is good enough to facilitate a reasonable gaming experience. Priced at Rs. 85,990 (~$1150) in India, the HP Omen 15 strikes an excellent balance between price and performance despite its issues.

Other options include the ASUS TUF Gaming laptop that packs a slightly lower spec processor but offers a similar amount of storage and an equivalent graphics card. Priced at Rs. 60,990, you’ll end up saving a fair amount of money without a significant performance drop.

Meanwhile, the Lenovo Legion 5i delivers more RAM, similar performance, and a 10th gen Core i7 Processor for a slight mark up.

Keeping the competition in mind, the HP Omen 15 is priced competitively and delivers the goods. The performance here is satisfactory and the few faults like the choice of materials aren’t quite a dealbreaker. Overall, the issues like its lackluster display tend to be compromises made across laptops in the category to hit the price point. Nevertheless, the HP Omen 15 is a safe bet to consider if you are in the market for a new affordable gaming laptop.