How to get the new Chromecast with Google TV for free 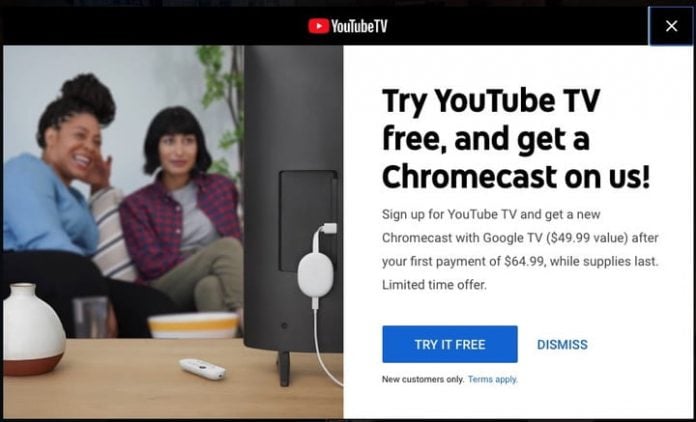 Google’s new Chromecast with Google TV is a $50 streaming media player that combines the convenience of a Chromecast device with the full feature set you’d expect from a set-top box like a Roku or a Fire TV.

But one area where it differentiates itself from the other $50 streamers made by Roku, Amazon, and TiVo is its tight integration with Google’s own YouTube TV live TV streaming service. By flipping to the Live tab inside the Google TV interface, you can quickly and seamlessly access all of YouTube TV’s content including the on-screen guide and all of the shows in your DVR.

So it’s not surprising that Google is now using an offer of a free Chromecast with Google TV as a way to lure new subscribers to YouTube TV.

Right now, if you head over to https://tv.youtube.com/welcome/ you’ll be greeted by a pop-up window that says, “Try YouTube TV free, and get a Chromecast on us!”

That sure sounds like you’re not only getting the Chromecast for free, but also YouTube TV for free, but the fine print makes it clear that’s not quite true.

Instead, once you agree to the free trial period for YouTube TV, and make your first monthly payment of $65, then you’ll get the free Chromecast.

Oh, and it’s only valid for first-time YouTube TV subscriptions, something I can verify: When I clicked through to sign up, I wasn’t offered this promotion.

This caveat aside, it’s still a good deal. You’re basically getting a highly desirable streaming media player and one month of YouTube TV (which would normally cost $115, for just $65. And even if you don’t like YouTube TV and decide to cancel after that first payment, the Chromecast is yours to keep.

Is there a catch? The only one we can think of is that the “while supplies last” portion of the offer may not last long. Google has already sold out of all editions of the new Chromecast except for the Snow (white) color.

There’s also something of a wait involved. Signing up gets you immediate access to YouTube TV’s free trial, but to get the free Chromecast, you have to wait until the end of your first month, pay the initial $65 monthly fee, and then you’ll receive an email with a link to redeem your free Chromecast promo code.