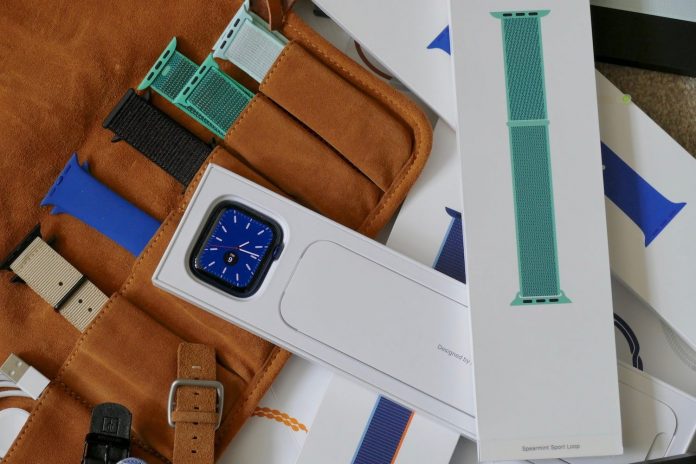 I suspect there are plenty of Apple Watch owners who have a small collection of Apple Watch straps from buying multiple models and switching up the look with midcycle strap upgrades, and perhaps don’t want to add yet another Sport Loop to it when they go to buy a new Watch SE or Watch Series 6. The Apple Watch is an established product and, at this point, another strap for some is as superfluous as another charger brick.

Right now there are 69 different straps available to buy separately through Apple. Search Amazon and there are thousands of results when you plug in “Apple Watch strap,” with prices ranging from less than $10 to over $600. From Casetify to Nomad, many companies that make cases for the iPhone also make straps.  Plu,s there are plenty of cool custom straps to discover, like Noomoon’s funky band, those from big-name fashion brands like Coach and Kate Spade, and even watchmakers like Shinola.

Another Apple Watch strap is, for some, as superfluous as another charger brick.

No matter how many Apple Watch models you’ve owned over the past few years, we’re willing to bet you have at least one other strap for each. It’s the easiest way to completely change the look of your watch, and to extend its life too. I have several Apple Watch straps, and there are favorites among them. When I get a new Apple Watch, I’ll often just put on my preferred strap and wear it with that.

But what about that magical out-of-the-box experience? Wouldn’t that wonderful moment where you take the Apple Watch out and strap it onto your wrist for the first time be completely ruined while you fiddle about looking for a strap to attach to it? Certainly, for a first-time owner, not including the strap would be like not fitting tires to a new car, but for anyone upgrading, it wouldn’t be an issue.

Why? When you buy an Apple Watch, the strap itself is separately packaged in another box already. The Apple Watch’s case isn’t attached at all, meaning you have to fit the strap right from the beginning anyway. It’s not a problem, as it teaches new owners how easy it is to change them. There’s no messing around with quick-release pins like a standard watch strap. Instead, a button press unlocks the strap and slides it off the case. It takes seconds, and every strap made for the Apple Watch works in an identical way.

Following in the footsteps of the watch industry?

Apple listened and learned from the watch industry when it made the Apple Watch, so would it be in line with watchmakers if it decided to ditch the band and simply sell the case on its own? In other words, can I buy a traditional watch without a strap?

Straps are often an integral part of a watch’s design. For example, when you buy a Casio G-Shock, the band is very much part of the watch, and although some models are marketed with interchangeable bands, owners for the most part will keep the strap that was fitted throughout their ownership. I checked with Tag Heuer and Hublot, and was told neither brand sells watches without straps. Swiss watchmaker Edox told me it has never sold a watch without a strap, and said it has no interest in doing so.

Alpina Watches — which includes both the Alpina and Frederique Constant brands that make smartwatches alongside traditional watches — told me the company doesn’t sell watches without a strap or bracelet, and expanded on the reasons why.

“In our industry, and specifically our brands, we have a multitude of watch cases and it would be difficult for the consumers to find the perfect strap which will fit the watch case,” I was told. “The watch is a luxury accessory and the strap is totally part of the design of the ensemble. Sometimes you can have a perfect watch case and dial, but if you put an ugly strap, then the object becomes ugly too.”

This perfectly encapsulates the reason traditional watchmakers don’t sell watch cases without a strap, and also why Apple would have less of a problem doing so. Because as explained, Apple Watch straps fit all models. As for attractiveness, well, that’s in the eye of the beholder — and if you care about the looks, chances are you’d rather put your own strap on the Apple Watch because you like it much more than the basic bands that come with them by default.

Apple bundles the basic Sport Band, Sport Loop, and Solo Loop with its cheapest Apple Watch models, but charges extra if you want one of its flashier straps, including the new Braided Solo Loop. If Apple unbundled the cheap strap with the Apple Watch, it’s realistic to expect a slight price reduction. It’s unlikely this would be the $50 you’d normally pay for a Sport Band, but $20 would seem possible.

Apple Watch fans with an existing stable of straps who save money upfront on a new strapless model would surely come back to Apple eventually to buy even more straps.

That would make the cheapest Apple Watch SE start at $259. It’s already strong value, but to save a little bit more may further encourage owners of early Apple Watch models to upgrade to the new model. Apple already offers plenty of choice in its Watch range, including niche versions like its ultra-expensive Hermés models, and a Watch-only option would serve a similar dedicated niche.

Apple said the removal of the charging block from the Apple Watch box was another effort to reduce its overall environmental impact, and it rightly makes a big deal over the aluminum Watch being made from 100% recycled metal. Providing a Watch-only option without a strap would fit in nicely, give those teetering on the brink of upgrading a further push. It may even save us longtime Apple Watch supporters a little cash. It’s really hard to see a downside.

Facebook
Twitter
Pinterest
WhatsApp
Previous articleGoogle Pixel 5 vs. Pixel 4 XL: Should you upgrade?
Next articleThis Mophie wireless charging pad is 50% off in time for Prime Day