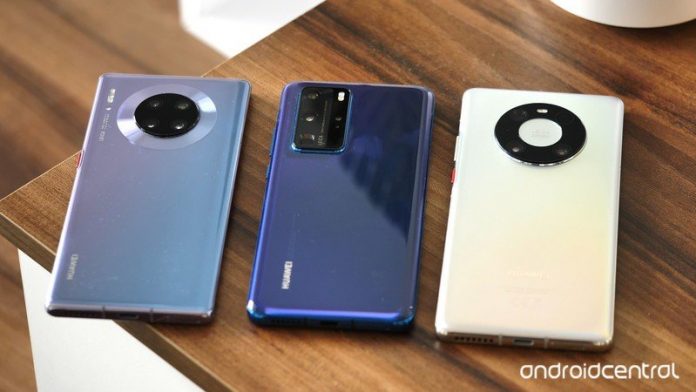 Thursday morning HUAWEI unveiled the Mate 40 Series of smartphones in a special global launch livestream. While the phones were the primary focus of the presentation, HUAWEI also had plenty of other devices, accessories, and services to show off as well. Here’s a look at everything that was announced at the HUAWEI Mate 40 Series launch event. HUAWEI’s new Mate 40 Series of smartphones were the stars of the show. These devices sport the “Space Ring Design” for the outward-facing cameras, and also have a striking display curvature that wraps around the sides of the phones. All of the Mate 40 devices come with powerful dual stereo speakers for top-notch audio. Additionally, all of the Mate 40 devices have a high IP rating, so they’ll resist damage from dirt and water effectively.

The first phone in the Mate 40 Series is the HUAWEI Mate 40. It’s rocking a gorgeous 6.5-inch Flex OLED display with 2376 x 1080 resolution and DCI-P3 HDR. The display is 90Hz, has a 240Hz touch sampling rate, and features a built-in fingerprint sensor. In terms of performance, HUAWEI is stepping up big time here with the inclusion of a brand new 5nm HiSilicon Kirin 9000 CPU that surpasses previous chips by a wide margin, while also cutting down on power consumption. This improvement, along with the inclusion of a 4200 mAh battery, results in a battery life that’s just under 10 hours. It comes with a ARM Mali-G78MP24 GPU that performs 52% faster than the Snapdragon 865+ competition. Additionally, it also comes with 8GB of RAM and 128GB of storage space, which will be plenty for most users. 5G enthusiasts will be pleased with the Mate 40 too, as it comes with a 5G modem that has 5x the upload speed and 2x the download speed compared to the competition. Lastly, it has a 50MP camera, 16MP wide-angle camera, and a 8MP telephoto camera on the rear. On the front, there’s a 13MP wide-angle camera. The rear camera is capable of taking HDR video, bringing vivid color and detail to your recordings, and you can also take 240FPS slow-motion video with it too. Meanwhile, the frontal camera has smart technology that will expand up to 100 degrees as more people enter the frame, which is wider than other smartphones. In terms of color, the phone comes in White, Black, Mystic Silver, Green, or Yellow. The HUAWEI Mate 40 is priced at €899 / $1,063. Next up is the HUAWEI Mate 40 Pro. It’s similar to the standard HUAWEI Mate 40, though there are some important differences. The Mate 40 Pro comes with a larger 6.76-inch Flex OLED
with 2772 x 1344 resolution, has 256GB of storage instead of 128, and adds one of HUAWEI’s signature NM card expansion slots. The rear wide-angle camera has four more megapixels at 20, and the rear telephoto camera has four more megapixels and 5x periscope zoom. The frontal camera can also be used to unlock your phone with 3D facial recognition. Lastly, the battery is slightly bigger at 4,400 mAh. The color options are the same as the HUAWEI Mate 40. The HUAWEI Mate 40 Pro is priced at €1,199 / $1,419.

Then there’s the HUAWEI Mate 40 Pro+, which takes things a step further by bumping the RAM up to 12GB, including both a 8MP 10x periscope telephoto camera and a second 12MP 3x periscope telephoto camera on the rear, and adding an IR blaster that you can use to control other devices like TVs. The HUAWEI Mate 40 Pro+ is priced at €1,399 / $1,655. There’s also a special luxury version of the Pro+ called the Porsche Design HUAWEI Mate 40 RS. It features a unique and sharp Porsche design, as well as 512 GB of storage. It’s priced at €2,295 / $2,715. Both versions of the device come in either Ceramic Black or Ceramic White, but the Porsche Design HUAWEI Mate 40 RS can also be purchased with an optional leather case.

EMUI 11 represents HUAWEI’s latest advancements in the user interface (UI) department, and it’s coming to the Mate 40 Series as well as other HUAWEI devices. During the show, HUAWEI showcased how you can use EMUI’s Always On Display (AOD) to customize your interface with a variety of different themes, and you even have the ability to integrate animated GIFs with elements of the UI. EMUI 11 is adding a unique Eyes on Display (EOD) feature that causes your HUAWEI device to wake up when you simply look at it.

HUAWEI is introducing improvements to its gesture controls with EMUI 11. With hand gestures, you can wake, scroll, swipe, and press the device without ever actually touching it. Additionally, you can also answer calls and raise the volume without physically pressing any buttons either. Volume can be raised and lowered with eye controls, too.

Next, EMUI 11 is making big improvements to how multitasking works with HUAWEI devices. EMUI 11 sports smart multi-window technology, which allows you to split your device’s screen in two to engage with two applications simultaneously. You can open a third application in a smaller window and resize or reposition it as needed. There’s also multi-screen collaboration, which allows you to share up to three screens between HUAWEI devices like phones, tablets, and laptops. With this feature, you could blow up your phone and tablet displays on your laptop screen, allowing you to multitask more effectively.

Lastly, EMUI 11 added a special new email UI called Email Conversation Mode. This mode transforms your traditional email view into something that resembles what your text messaging app looks like. It organizes your emails by person or subject and hides the full content of emails until you decide you want to open them, instead only showing a card with key information only. This feature will be incredibly useful for people who often end up feeling swamped when they read their emails.

HUAWEI also spent some time showcasing some of the helpful apps and services that you’ll be able to use on the Mate 40 Series and other HUAWEI devices. The first of these is MeeTime, an application that allows you to have full 1080p HD video calls between HUAWEI devices. It’s starting out available in over ten countries.

Petal Maps, a new HMS app, got some stage time. Available in over 140 countries, you can get turn-by-turn navigation so you always have detailed information about your travel route. You can also switch the view of your navigation route by using EMUI 11’s gesture controls. Additionally, the app also updates traffic and transport information in real-time in some major cities.

HUAWEI also unveiled its Petal Search that allows you to conveniently and instantly find the information and services you need. Petal Search is available in more than 170 countries and regions, and supports over 50 languages. Search queries span over 15 domains and 300 categories, including news, videos, music, pictures, shopping, flights, and points of interest. Petal Search has bolstered its local search capabilities by allowing you to use smart cards, quick apps, and the in-app search feature to explore even more categories, such as catering, tourism, shopping, attractions, and sports events. What’s more, you can find the local weather or look for nearby restaurants and attractions simply by using your voice.

Alongside the Mate 40 Series, HUAWEI also revealed some companion devices and accessories that were designed with Mate 40 smartphones in mind. The first of these include the HUAWEI Supercharge 50W Wireless Car Charger and the HUAWEI Supercharge 66W Wired Car Charger, both of which bring speedy phone charging capabilities to your car. HUAWEI showcased the 12000 Supercharge 66W Power Bank that will give your Mate 40 Series device charging on the go.

A unique case for the HUAWEI Mate 40 Pro, the Ring Light Case, was shown off. This case not only protects your phone, but also includes a ring light that can flip up from the rear of the phone and be used as a light for selfies and other front-facing camera shots. The Mate 40 Pro is capable of keeping the light charged wirelessly. It costs €69 / $82.

Next up is the Porsche Design HUAWEI Watch GT 2, which is a smartwatch that features a luxurious and lightweight titanium body, sapphire glass, and a ceramic case. It features two weeks of battery life and comes with all of the health and fitness-related services, like oxygen level tracking and heart rate monitoring, that users have come to expect from smartwatches. It costs €695 / $822.

HUAWEI also showed off the FreeBuds Studio, a pair of minimalist headphones with a 7mm stainless steel arm, a comfortable and soft design, and a 48kHz wide frequency 4-layer diaphragm driver with a 24 bit/96kHz high resolution audio codec. The headphones are capable of silencing sounds of up to 40dB with active noise cancellation. The 6-mic matrix pick-up system ensures your voice will be loud and clear. The dual antennas provide full 360-degree signal coverage, ensuring that you won’t need to worry about wireless interference. The FreeBuds Studio can also connect to two devices at the same time, and you can quickly switch between them as needed. Simple touch controls on the side of the headphones allow you to control volume and other settings, while the 24-hour battery life guarantees lasting performance. You can get 8 hours of usage time from just 10 minutes of charging. The FreeBuds Studio is priced at €299 / $354. There are two colors available: black and gold.

Finally, the HUAWEI Sound was announced. This small device features a four-speaker acoustic design, an impressive bass system driven by a four-inch woofer, Devialet’s SPACE technology that ensures an immersive surround sound experience, and compatibility with Bluetooth, 3.5mm AUX in, and UPnP connection. It’s priced at €199 / $254.

As you can see, HUAWEI had a lot to show off. See the full replay for yourself and get any extra details from HUAWEI’s event page.