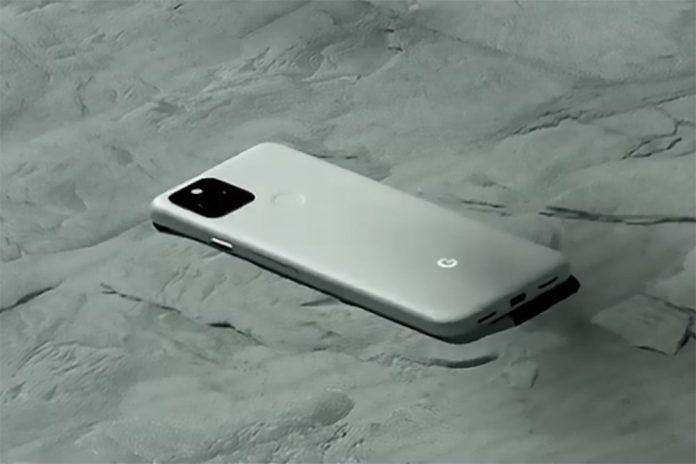 The 2020 Google Pixel smartphone is all about 5G and the magic it can deliver. New 5G networking protocols offer swift network downloads and speedy streaming for a flawless online experience that also enhances Google’s Stadia gaming service. Two new phones — the flagship Google Pixel 5 for $699 and the Google Pixel 4a 5G for $499 — are both available for pre-order from the Google Store. While in many ways, these two phones are identical, there are notable differences that account for the difference in price. We break it down for you.

Google’s Pixel 5 falls right in line with Google’s other minimalist handsets, with a tiny hole-punch front-facing camera, slender bezels, and edge-to-edge display. The back holds a Pixel Imprint fingerprint sensor (but no face unlock) and a dual-lens square camera module. The Pixel 5 is the more expensive model by $200, and differentiates itself in part with a recycled aluminum body, IP68 water resistance, and wireless charging. All that comes packed in a casing that comes in luminous speckled black or a light green hue.

The Pixel 4a 5G, for $200 less, bears many similarities to the top-of-the-line phone — it even has a larger screen, a 6.2-inch panel making it the biggest screen in the product line. Screen resolution is also quite similar: The high-end model is 432 pixels per inch while the cheaper model is 413 pixels per inch. The body, which comes in black or white, is constructed with soft-touch polycarbonate, while the small punch hole front camera sits in the left corner of the display. What the Pixel 4a 5G lacks in water resistance, it makes up with an increasingly rare 3.5mm headphone port.

While the two devices look similar, the stronger and more high-end aluminum body and water-resistance on the Pixel 5 win this round.

The Pixel 5 and 4a 5G, with their Snapdragon 765G processors, serve up plenty of power for stable operations. The Pixel 5 bests the Pixel 4a 5G with 8GB of RAM as opposed to 6GB, but both still offer 128GB of storage. All of this bodes well for the longevity of both units.

With the Pixel 5, Google significantly jacked up the battery capacity to 4,000 mAh, and that should really make a difference in battery life compared with the Pixel 4‘s relatively paltry 2,800 mAh battery capacity. The flagship handset also features USB PD tech for wired charging at 18W, 10W wireless charging, and reverse wireless charging. An Extreme Battery Saver feature funnels power to specific apps that you can designate, and Google says this feature can extend battery life to 48 hours per charge.

The Pixel 4a 5G has a somewhat lower battery capacity, but not enough to make much of a difference. The phone also supports 18W charging, but unlike the flagship, there’s no wireless charging capability. The Extreme Battery Saver should offer similar performance to the Pixel 5, but there’s no way to know until we’ve reviewed the two phones. This is a tie.

The Pixel 5 dual-lens camera system’s 12.2-megapixel lens is more or less standard for the brand, but the new 16MP ultrawide second camera is the one generating the buzz. This unit replaces the last generation’s telephoto lens. If you’re one of those smartphone owners who buy for the camera, the cheaper Pixel 4a 5G is virtually indistinguishable from the more expensive Pixel 5, making it a serious contender. Software features like HDR+ with exposure bracketing, portrait shots with Night Sight, and the new Portrait Light feature are the same for both models and can even be used with software updates to older handsets. Video shooters get three new stabilization modes — Locked, Active, and Cinematic Pan.

We’re not anticipating these two models being functionally different where the camera is concerned. This is another tie.

No surprises here — both new phones ship with the special Pixel version of Android 11, and you’ll find the same build on each, making them impossible to choose between. What about updates? Google is promising updates spanning three years, taking owners through to at least Android 14. It’s completely even here.

Both phones, despite their distinct lack of flash, offer the same special features. A new feature called Hold for Me has the Google Assistant take over for you as you wait on hold for customer service, and notifies you when an agent has come on the line. Both also have a raft of other A.I.-powered special features, including Call Screen.

The Pixel 5 and the Pixel 4a 5G are Google’s first 5G phones, giving you faster data speeds for everything from downloading videos to streaming games over Stadia. But the Pixel 5 has another neat trick in that it can extend the 5G signal to other devices via a 5G hotspot. The Pixel 5 supports millimeter-wave (mmWave) 5G as well as sub-6GHz 5G to deliver somewhat faster speeds compared with LTE in most U.S. locations, and much faster speeds in crowded urban areas. It’s especially advantageous for Verizon customers, as that service extensively uses mmWave 5G. In comparison, the 4a 5G supports only the sub-6GHz 5G variation of the protocol. That said, it is still early times in 5G land, and while 5G capability can future-proof your phone and leverage specific environments, this distinction may not translate into better network performance for most people.

Neither Google phone is available right now, but you can join the waitlist on Google’s product page if you’re interested in ordering either one. The latest word is that the Pixel 5 should be available around mid-October for $699. The Pixel 4a 5G will cost $499, $200 less than the Pixel 5, and will be available in the U.S. on November 19.

If you have an extra $200 to spare for a midrange phone, the Google Pixel 5 is the phone to get. That said, it shares many critical specs with its lower-priced sibling, the Pixel 4a 5G. We question whether wireless charging, an aluminum design, 90Hz refresh rate, slightly more RAM, and wider 5G coverage are enough to justify the higher price. For some, the answer is yes. For others, it’s fortunate that a fine alternative is available in the Pixel 4a 5G that will save them some cash.