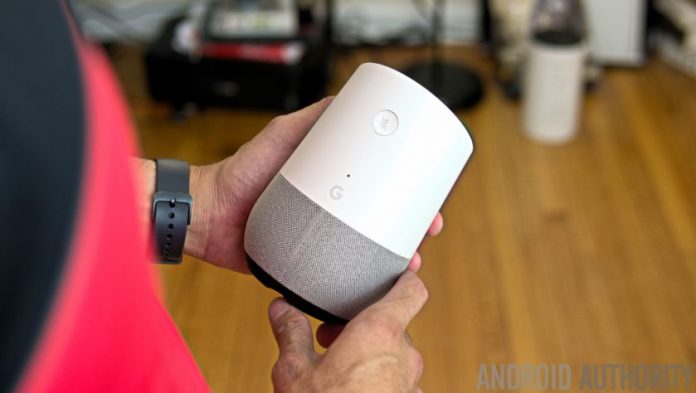 Update, October, 6, 2020: This review was updated to address how the speaker holds up compared to the competition, specifically against the Google Nest Audio.

Voice assistant services have infiltrated nearly every aspect of technology, but it has profoundly been more prevalent in smartphones. Its usefulness continues to grow thanks in part to iterative improvements that have made them “smarter” over time. The Google Home, just like the Amazon Echo, aims to go beyond basic smart speaker functionality by seamlessly integrating itself with other smart connected devices in the home.

The Google Home has since been replaced by the Google Nest Audio. Read our in-depth review of Nest Audio here.

The Google Home is unobtrusive

Unlike the Amazon Echo, Google Home feature an inviting design that allows it to blend into wherever it’s placed. It’s a stark contrast to the hard-lines of the very distinctive speaker design of the (old) Amazon Echo.

It’s diminutive in size and features a peculiar looking shape, one that can be mistaken for one of those Glade air fresheners you might find throughout a home. The bottom compartment of the Google Home that’s shielding its array of speakers feature a mesh-like fabric, which does a better job we feel in complementing your furniture. And if you want some customization, the base can be swapped out.

The Google Home can connect via Wi-Fi or Bluetooth for playback.

There exists a single button used to mute the microphones. Looking at the top surface, it appears completely flush and free of any buttons, with the exception of two small holes used for its far-field microphones, but it’s been ingeniously designed with touch controls. When we place a finger on it, the embedded LEDs light up to indicate the volume level – or alternatively, when you say, “Ok Google.”

The only thing you’ll need to decide is where to place it, just because it requires a constant power source via its power chord. At first, we felt as though it was restrictive, but given its always-on premise, it makes perfect sense going with this implementation.

Does the Google Home have good software? 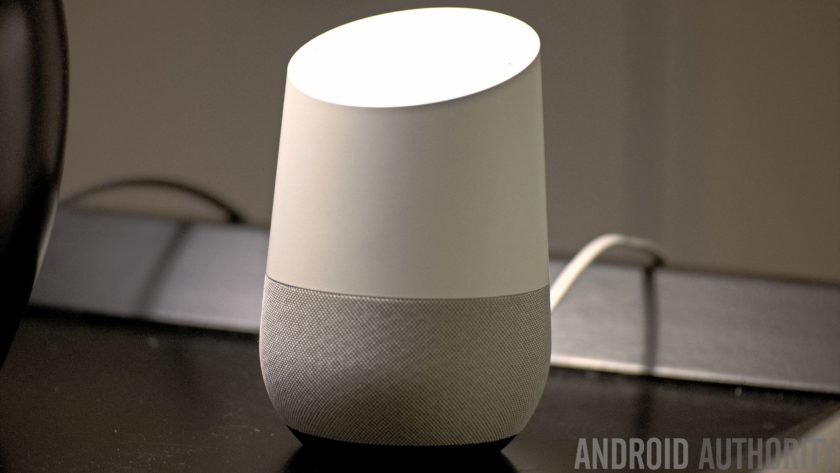 You’re going to need to download the new Google Home app to connect it to your home network, and subsequently. The setup process is a breeze, so once it’s connected to your Wi-Fi network, all that’s left to do is tell Google Home what to do by speaking the activation phrase; “Okay Google.” Unfortunately, this can only officially be customized to the alternative, “Hey Google.” If you have other Google Assistant activated devices around, they’ll also be initiated by this verbal command.

Being a Google product and all, there’s no surprise at all that it integrates seamlessly with most of Google’s services. You can easily cast YouTube Music from your smartphone, or any other Chromecast-supported app like Podcast Addict. You can even use it to control certain smart home devices like the Nest Cam or compatible Honeywell thermostats.

What services does Google Home support?

Music services supported out of the gate include YouTube Music, Spotify, and Pandora, but Amazon Music HD is noticeably absent – no shocker there! 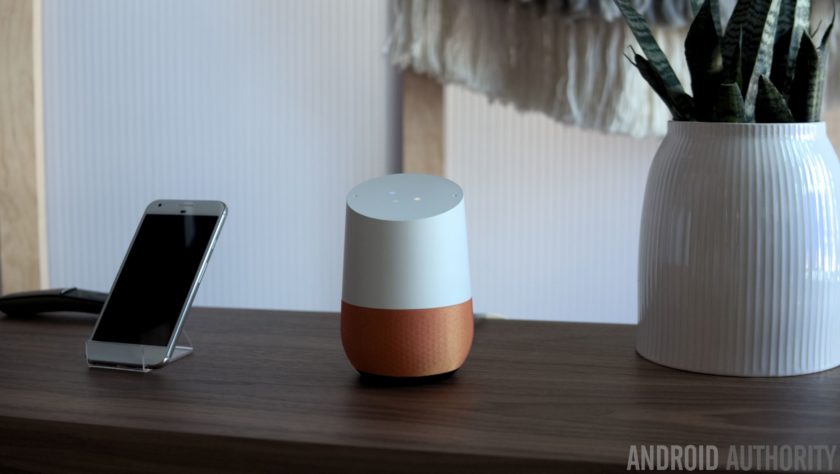 Another intriguing prospect about Google Home is how it’s able to integrate with connected devices in the home. Support extends to a few products consisting of Google Chromecast, Nest, Philips Hue, and SmartThings but it has since expanded into certain smart displays, smart locks, and thermostats. Google is constantly expanding its partnerships, so more and more smart home tech is supported by the assistant.

How does the Google Home sound? 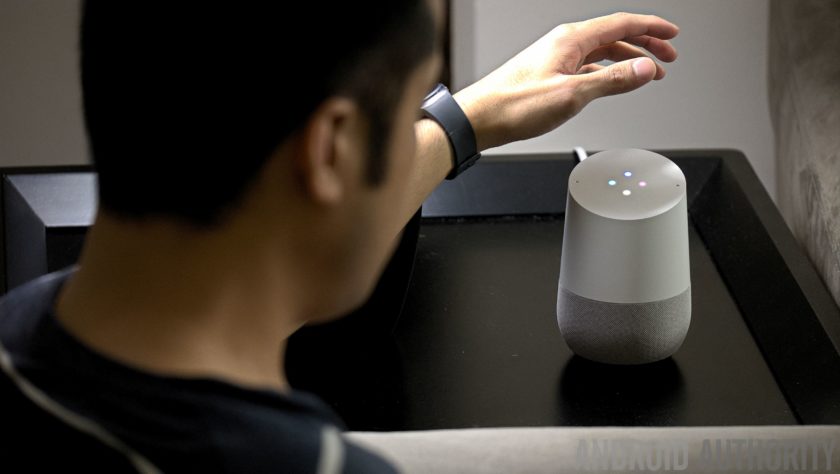 The Google Home speaker sounds good for its size, but the bass response may not be up to snuff for sworn bassheads. It uses a 2″ driver and dual 2″ passive radiators. The sound is okay, but can’t compare to the Google Home Max or Nest Audio.

Bass reproduction becomes distorted as volume output increases. This, again, is a physical limitation of the speaker casing and size. The single driver is unable to move fast enough and accurately reproduce all frequencies without distortion, so you’re left with what some refer as a “muddy” sound. In other words, you’re hearing harmonic distortion.

You can use Wi-Fi to stream HE-AAC, LC-AAC, MP3, Vorbis, WAV, Opus, and FLAC files (up to 24-bit/96kHz). It also supports Bluetooth 4.1 firmware, for those who subscribe to services such as Amazon Music (which isn’t supported by Chromecast). 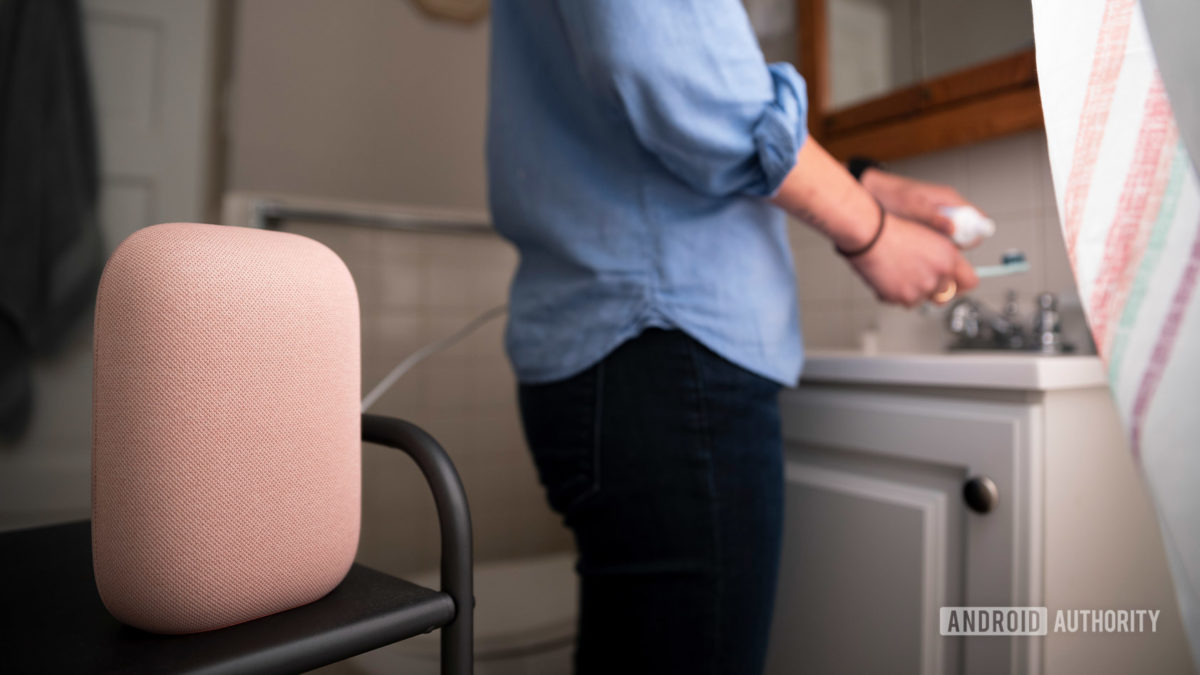 Google greatly improved upon the Google Home with the Nest Audio. As with the Nest Mini, the Nest Audio supports Ambient IQ, which automatically increases the volume of spoken word content (e.g., audiobooks and podcasts) as your environment gets noisier. This is useful for anyone who listens to podcasts while cleaning the house or even while washing dishes.

Sound quality is significantly better with the Nest Audio, specifically bass reproduction. The Google Home is good for its size, but bass reproduction is underwhelming and often distorted due to the passive radiators and limited spatial volume within the chamber. Google remedies this with the Nest Audio because it added a dedicated mid-woofer and tweeter system, to delegate frequency reproduction responsibility. This allows for a louder, more accurate bass response from the  Nest Audio compared to the similarly sized Google Home.

Almost like a Google Home 2, this full-sized smart speaker is for the folks who want something that sounds better than a Nest Mini but is less expensive than the Google Home Max.

Should you buy the Google Home?

The Music Lover in your life will love selecting their favorite TIDAL playlists while getting their hands dirty in the kitchen with the Google Home Smart Speaker. With a two-inch driver and dual two-inch passive radiators, the Google Home has incredible sound for its size.