Home How to Fortnite season 4 week 6 challenge: Deal damage after using Black Panther’s...
How to 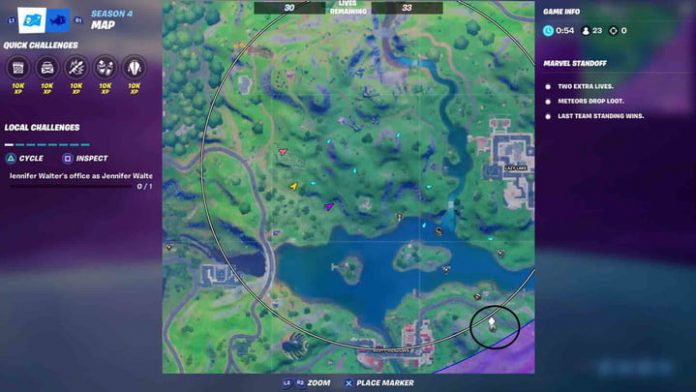 It’s a new week, meaning a new set of Fortnite challenges is ready to complete. For season 4, week 6, there’s a challenge for dealing damage after knocking an opponent back with Black Panther’s Kinetic Shockwave — a new ability that has just been added during season 4. You might be confused as to how to complete this challenge since the game doesn’t outright tell you how to use the new hero power-ups. They’re only available in the new Marvel Standoff and Marvel Knockout modes that became available in mid-September.

To use the new hero power-ups, you’ll need to be in one of the new game modes: Marvel Standoff or Marvel Knockout. For the best results, we recommend attempting the challenge in Marvel Standoff, as the power-ups at your disposal are more abundant, and there are more players to use them on. The power-ups are marked on the map and have random spawns with each game.

When we jumped into a Marvel Standoff match, Black Panther’s Kinetic Shockwave (or Black Panther’s Kinetic Armor, as the power-up is labeled) spawned in the southeastern portion of the map, as indicated by a Black Panther icon. Pick it up, and it will be mapped to your L1 button on PlayStation 4 or LB on Xbox One. Above is an image of what the icon looks like. If you’re having trouble finding the power-up, you can keep running around until one spawns, or you can back out and try again in a different match.

We recommend keeping your map open while you’re still on the bus to wait for the power-ups to spawn. Once they start popping up on the map, pinpoint Black Panther’s Kinetic Armor, mark it, and then make a beeline toward it. With this power-up being tied to a new challenge, other players will likely rush toward it, too, so do your best to get there before they do.

Now that you know how to get your hands on Black Panther’s Kinetic Armor (which will allow you to use the Kinetic Shockwave attack), you’ll need to find an enemy to knock back with the attack. Run around the map until you see an enemy and run up to them to execute your newly-acquired move. It takes a moment to charge up, but once it does, you’ll initiate an AoE blast that will push the enemy back and cause moderate damage.

The final step after you knock the enemy back is to attack them. We recommend using your R2 attack to land the final blow. The attacks you’ll have by default will change with each match, so the level of difficulty will vary based on the attacks the game decides to give you. One round, we had Iron Man’s long-range blast, which is much easier to use than one of the melee attacks, as you can strike enemies from afar. Whichever attack the game gives you, do your best to hit the enemy right after you knock them back with the Kinetic Shockwave.

And remember, all you have to do is deal damage after knocking them back with the Kinetic Shockwave attack — you don’t need to eliminate them. In the video above, you can see that we barely were able to pull it off due to how hectic things were in that particular area. In short, once you get your hands on Black Panther’s Kinetic Armor by playing one of the new Marvel modes, all you need to do is find an enemy to knock back and quickly follow with an attack to complete the challenge and gain 50,000 XP.