HomeHow toFortnite season 4 week 10 challenge guide: How to drive a boat...
How to 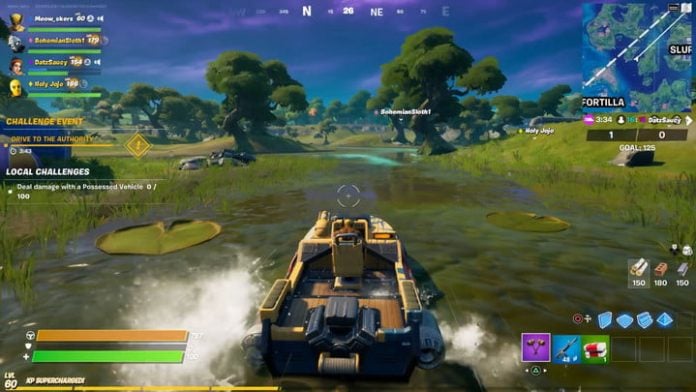 Now that season 4 week 10 of Fortnite is live, you’ll have a new set of challenges to complete. One of them requires you to drive a boat from The Fortilla to The Authority in less than four minutes. This task seems daunting at first, but we’ve got all the details on how to complete it with plenty of time to spare, including the best path to take.

Here’s how to drive a boat from The Fortilla to The Authority in less than four minutes in Fortnite.

The first thing you should do is boot up a match in Team Rumble — that way, you can respawn if you die. It’s also easier to see in Team Rumble, as Battle Royale is currently covered in a thick fog during the game’s Fortnitemares event. Land at The Fortilla (located to the southwest of the map) and look for a speed boat. There are multiple in this area, so even if most of your team decides to go for the challenge, you’ll still probably be able to find a boat for yourself. We had luck finding a boat in the center island of this area, but there are several other boats around it.

Next, you should be familiar with the path you need to take to get to The Authority (which is labeled as “The Ruins” during this Fortnitemares event). The Authority is the island in the center of the map and can be accessed by boat from The Fortilla. First, make your way to the north side of Slurpy Swamps and take the path through Weeping Woods. If you keep going east, you’ll dead end at The Authority. Keep in mind, you don’t even need to get out of the boat for the challenge to register.

Here’s a video of us reaching the goal in under two minutes.

As long as you stay in the water and follow the path while continuously mashing the boost button (Circle on PS4, B on Xbox One, and A on Nintendo Switch), getting there within four minutes shouldn’t be an issue. Remember, there are other paths you can take to reach The Authority from The Fortilla, but if you go through Slurpy Swamp and Weeping Woods, you’ll get there faster. It’s also worth noting that this challenge stacks with the other one for traveling 20,000 meters in a vehicle, so you should attempt this challenge while you go for the other. Once you roll up to The Authority, you’ll gain credit for completing the challenge and will be rewarded with 25,000 XP for your troubles.