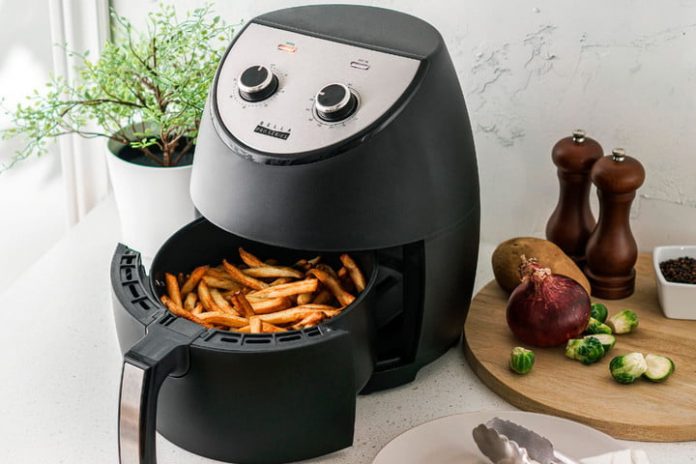 The Prime Day deals have finally dropped, but if you don’t have a Prime membership, that doesn’t mean you’re left out in the cold. Other retailers including are hungry to get in on the action by running their own sales to compete with Amazon, and Best Buy is throwing its hat into the ring by rolling out some early Black Friday 2020 deals on Prime Day.

These Best Buy Prime Day Deals are guaranteed through Black Friday on November 27, but we expect plenty of them go out of stock before then, so don’t hesitate if you see one that catches your eye. To give you a head start over other Prime Day shoppers, we’ve already sorted through the entire sale to bring you the 12 best deals from the event that you don’t want to miss; if you’re hungry for some juicy Prime Day deals but don’t have a Prime membership, then keep reading.

You could say that air fryers are the toaster ovens of the 21st century, packing a lot of utility in a small package that fits right on your kitchen counter. The Bella air fryer is an ideal size with its 4.2-quart capacity that lets you fry, bake, broil roast, and warm up to 3.6 pounds of food with little to no oil needed. Its dual analog dials — one for temperature and one for time — could not be easier to use. The Best Buy Prime Day sale is your chance to score this versatile countertop cooker for $30, or half off.

If iPads aren’t your thing and/or you’re an Android phone user, then the Samsung Galaxy Tab series are the best alternative to Apple tablets. There are plenty of Prime Day tablet deals to go around, and if you want the cheapest, the 8-inch Galaxy Tab A is a steal at this price. This 2019 model packs a quad-core processor, 2GB RAM, and 32GB of storage, and comes loaded with Android 9.0 Pie so you can share a software ecosystem with your Android smartphone. It’s not as big or quite as powerful as the 10.2-inch iPad, but at $100 after a $50 discount, this Best Buy Prime Day deal is hard to complain about.

Prime Day is a fantastic time to shop for 4K TV deals. If you just want a good, no-frills Ultra HD smart television, then it’s hard to do much better than the TCL 4 Series for the price. The 50-inch TCL 4 Series Roku 4K TV is a great mid-sized set that’s big enough to enjoy all your content in crisp UHD without overwhelming your room, and with pre-loaded streaming apps, you’ve got everything you need to get streaming via Wi-Fi or ethernet right out of the box. The Best Buy Prime Day sale knocks this 4K Roku TV down to a cheap $230 ($120 off).

Android users shopping for a tablet that’s on par with the 10.2-inch iPad should look no further than the new Samsung Galaxy Tab S6 Lite. This budget-friendly Android tablet sports a 10.4-inch 1200p touch display, features 64GB of storage, and comes bundled with the S Pen stylus, offering a bit more value than the entry-level iPad which features 32GB of storage and no stylus. It also packs dual stereo speakers unlike the standard iPad (which has been one of our gripes with Apple’s tablet for years). These Best Buy Prime Day deals make the Galaxy Tab S6 Lite an even better value at $250 after a $100 price cut.

Home essentials often get overlooked during sales like Prime Day, but they’re called “essentials” for a reason, and everybody needs a good vacuum cleaner. The Dyson Cyclone V10 Animal Pro cordless vac is a great choice for cleaning apartments and tight spaces thanks to its compact design and ability to be converted into a convenient handheld vacuum. Despite its size, the Dyson Cyclone V10 delivers plenty of suction for cleaning everything from hard floors to carpet and upholstery. A $200 Prime Day discount knocks this great stick vac down to $400.

Gone are the days when you had to pay more than a grand for a big-screen TV, and this 70-inch Samsung 6 Series 4K smart TV is the perfect addition to any large common room or beefy home theater setup. Powered by Samsung’s Tizen software, this smart television is ready to stream your content libraries from all of your favorite streaming apps, and its Crystal 4K HDR processing ensures you won’t miss any details (no surprise from Samsung, one of the leaders in TV panel technology). At just $530 after a $220 discount for the Best Buy Prime Day sale, this might be the best large 4K TV deal going right now.

The Galaxy Tab S7 is the cream of the Android tablet crop, but you don’t have to pay nearly as much for one as you would for a premium Apple tablet like the new iPad Pro. It won’t replace your laptop (no tablet really can, if we’re being honest), but with an 11-inch Quad HD display, 128GB of storage space, 6GB of RAM, the Bixby personal A.I. assistant, and an included S Pen stylus, the Galaxy Tab S7 can do everything you’d want a tablet to do and will do it very well. A $100 savings brings the Galaxy Tab S7 down to $550, making this Best Buy Prime Day deal a very attractive pick for a higher-end Android tablet.

Samsung is a pioneer in LED panel technology and has brought its gorgeous QLED displays to the laptop world. The Galaxy Book Flex is one such laptop that has gotten the QLED treatment, featuring a gorgeous 13.3-inch quantum LED touch display that folds flat on its hinge for tablet-like use. This compact and versatile 2-in-1 also offers plenty of performance for work and entertainment with its Core i5 CPU, 8GB RAM, and 256GB SSD, and at $600 ($250 off) for the Best Buy Prime Day sale, it’s an incredible value if you’re looking for a modern 2-in-1 laptop boasting some of the best display technology out there today.

Speaking of QLED panels, the 55-inch Samsung Q60T QLED 4K TV is a very affordable way to give this quantum LED technology a spin. QLED screens feature tiny quantum nanoparticles that catch and amplify light, resulting in a brighter, more colorful picture than standard LED TVs can create. You don’t have to pay as much as you might think for these next-gen panels, either: The 55-inch Samsung Q60T QLED 4K Tizen smart TV can be yours for $600 right now, down $100 from its normal price for the Best Buy Prime Day sale.

Even better than QLED is OLED, or organic light-emitting diode, which eliminates the need for a separate backlight and allow each pixel to light up or turn off independently. This means that a television with this technology like the 55-inch Sony A8H OLED 4K TV has the unique ability to create true, deep black scenes instead of the dark washed-out grey you often experience with standard LED panels (such as during night time or space scenes). This Sony OLED 4K TV also offers pretty much everything else you want in a modern smart television, including Google Assistant and Amazon Alexa controls, and it’s marked down to $1,300 after these Best Buy Prime Day deals shave off a cool $600.

Moving up in size brings us to the 65-inch Sony A9G Master Series OLED 4K TV, which might just be the best Ultra HD smart television in this size category. Its gorgeous 65-inch OLED panel is paired with Sony’s X1 Ultimate processor to create a nearly perfect 4K HDR picture with vibrant colors and true contrast, and comes loaded with a bevy of smart features (including Google Assistant and Amazon Alexa compatibility) thanks to its Android TV software. OLED TVs are the best on the market (meaning you’re going to pay for them), but these Best Buy Prime Day deals take a whopping $1,000 off this Sony A9G Master Series OLED 4K TV which brings it down to a much more reasonable $2,500.