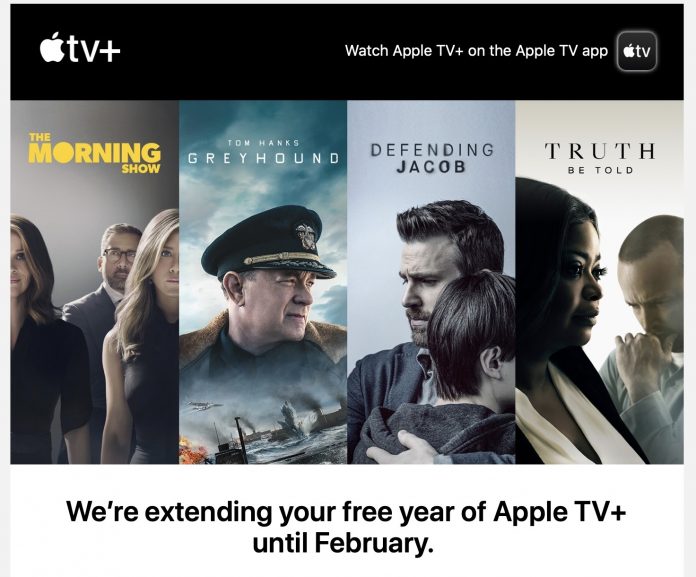 Apple this evening began sending out emails to Apple TV+ subscribers who have a trial subscription to let them know about a planned three month trial extension.

We’re giving you extra time to discover the latest Apple Originals and catch up on shows returning for a second season. You don’t have to do anything — just keep watching for free until February 2021.

It’s been an incredible debut year. Audiences are loving the Emmy Award winner The Morning Show, the blockbuster WWII thriller Greyhound, the heartwarming comedy Ted Lasso, and so much more. Be on the lookout for new premieres, hit movies like On the Rocks, the eye-opening docuseries Tiny World, and Season 2 of Servant, For All Mankind, and Peabody winner Dickinson.

First announced last week, the trial extension applies to those who purchased a device beginning in September 2019 and signed up for a free year of service when ‌Apple TV‌+ launched on November 1, 2019.

The first ‌Apple TV‌+ subscribers who activated their year of access on that date were set to have their trial periods expire at the end of October or the beginning of November, but Apple is now extending those expiration dates until February.

Apple is also providing credits to subscribers who pay for an ‌Apple TV‌+ annual plan or ‌Apple TV‌+ monthly plan, offering them $4.99 per month for each month through February.

‌‌Apple TV‌‌+ adopters who signed up for their free year of service after a device purchase between November 2019 and January 2020 will benefit from the promotion that Apple is providing, with those subscriptions now expiring later than expected. Those who signed up for a free year after January 31, 2020 will not benefit because their free trials will already extend beyond the promotion limits.

According to Apple, the promotion is being offered so that ‌Apple TV‌+ subscribers have more time to check out the latest Apple original content. Apple says that new trial renewal dates will show up under Manage Subscriptions in the ‌Apple TV‌ app soon.Tags: Apple TV Shows, Apple TV Plus
This article, “Apple Sending Emails Letting Apple TV+ Subscribers Know About Extended Trial Access” first appeared on MacRumors.com

From the headset to all the official accessories, here's every link you need.Here's where to buy the Oculus Quest 2All
Read more

How and when did Among Us get so popular?

How did a game from 2018 become one of the most popular games of 2020?If you haven't been living under
Read more