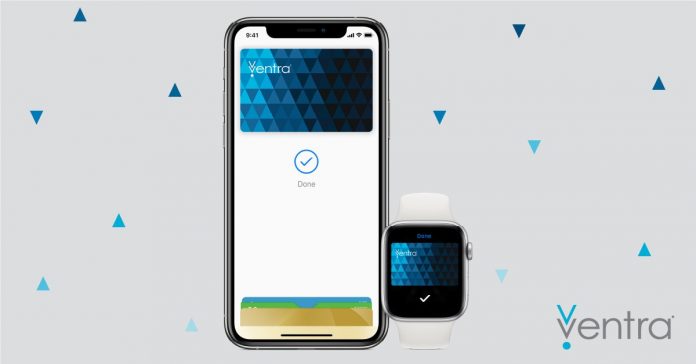 The Chicago Transit Authority today announced that Ventra now supports Apple Pay with Express Transit mode, allowing the fare card to be added to the Wallet app on a compatible iPhone or Apple Watch for tap-and-go payment at train stations and on buses.

With your Ventra Card on iPhone and Apple Watch it’s easier than ever to get around on CTA and Pace. Just tap your iPhone or Apple Watch to pay for rides using transit value or passes. No fumbling to grab a separate transit card, open apps or even wake your device — it’s that easy!

And get the same features of a Ventra Card on your iPhone and Apple Watch, including the ability to load and manage transit value and CTA and Pace passes, autoload, pre-tax transit benefits from your employer, account management features in the Ventra app and more!

How to add a Ventra card to the Wallet app:

Special fare program cards, such as RTA Reduced Fare, Student Ventra cards, or U-Pass cards, cannot be added to the Wallet app at this time. It is also not possible to add a Ventra card to the Wallet app on more than one device at a time, according to the CTA, which says to add the card only to the iPhone or Apple Watch you wish to use when you ride.

After adding an existing Ventra card to the Wallet app, the plastic version will no longer be functional and cannot be reloaded.