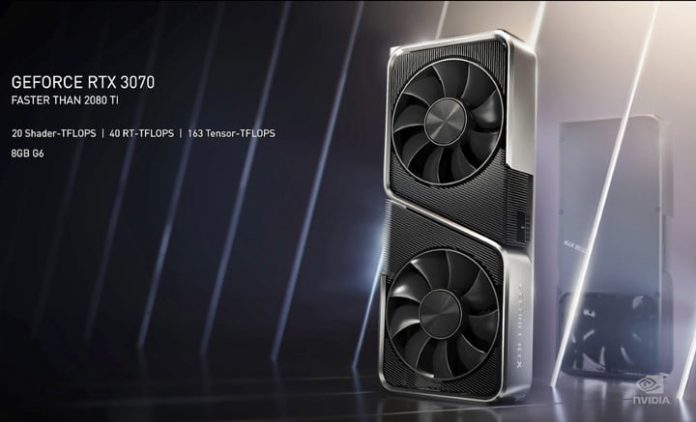 AMD’s RX 6800 graphics card smashed its way into the public consciousness one day after the Nvidia RTX 3070 review embargo lifted and one day before it went on sale, making for a momentous head-to-head between two of the most important graphics card launches of the year. Both cards are the most affordable of their generations so far, but they’re also exceedingly powerful, and either would be a great choice for your new gaming PC upgrade.

Which would be the best choice, though? Here’s how the two cards measure up on price, features, and, most importantly, performance.

Nvidia debuted the RTX 3070 alongside the more costly and capable RTX 3080 and RTX 3090 at its big September 1 reveal of the new-generation Ampere graphics cards. While those two cards were released — albeit in extremely limited numbers — in September, the RTX 3070 is set to launch on October 29 after a light delay to improve stock. If it doesn’t sell out as fast as the other RTX 3000-series cards, the price should be around the $500 mark, with more elaborate custom versions sitting around $600.

AMD debuted the RX 6800 on October 28, alongside the 6800 XT and 6900 XT. The first RDNA2 devices to go on sale will actually be the next-generation Xbox Series X and PS5 consoles when they debut in mid-November, but the 6800 won’t be far behind with a planned launch date of November 18. It is set to go on sale at $579.

After years of falling behind Nvidia on performance when it comes to high-end GPUs, AMD’s RDNA2 graphics cards look set to offer credible competition to team green at all levels. We’ll need to wait for third-party benchmarks of the RX 6800 to find out just how good it really is, but the specs table and AMD’s own first-party benchmarks (which aren’t typically as best-case-scenario as you might expect) suggest it could quite handily outstrip the RTX 3070.

AMD holds a slight advantage on process node, though Nvidia has made great strides in catching up since moving on from the Turing generation’s 12nm node. Core counts are considerably different, but due to the different architectures and the way each company categorizes their INT and FP32 cores, it’s not easy to make a direct comparison between the two.

Where we really see a comparable difference is in core clock and memory. Thanks to a claimed 56% performance per watt improvement in the RDNA2 architecture over its first-generation counterpart, AMD has managed to raise clock speeds significantly, to well over 2GHz for its boost clock frequency. The more typical game clock is almost 100MHz higher than the 3070, too, though with high-end cooling, reaching the boost clock on a more regular basis may be possible.

Thanks to its double memory capacity, faster memory, and comparable memory bus, the standard memory bandwidth for the RX 6800 is almost 15% greater than the RTX 3070’s. However, with AMD’s Infinity Cache technology, AMD claims the card has an effective memory bandwidth more than three times that. That may only have such a dramatic effect in specific scenarios, but it suggests that there could be a real benefit to the 6800 in memory dependent games and settings, like 4K resolution.

There are no real-world direct comparisons between these two cards just yet, but we do have an analog with numbers from AMD that can give us some idea of how the 6800 and 3070 would compete head to head. The 3070 is typically competitive with the RTX 2080 Ti, sometimes edging it out by a few frames, especially when ray tracing and DLSS are enabled. AMD claims that the RX 6800 is anywhere between 5% and 20% faster than the 2080 Ti in select games.

The caveat there is that AMD’s performance numbers in its October 28 presentation used its new Smart Access Memory feature, which improves performance when used alongside a Ryzen 5000 CPU and 500-series chipset. That could mean that these cards are closer in raw performance for non-Ryzen 5000 gamers.

As far as efficiency goes, the RX 6800 is the more demanding card for power and thermals. Where the RTX 3080 and 3090 are huge power hogs, the 3070 is comparatively lean, although 220W is still nothing to sniff at.

Image enhancement has become a major selling point for modern graphics cards, with both AMD and Nvidia’s driver suites enabling clever image sharpening and upscaling for the new and last-generation graphics cards. Nvidia’s DLSS 2.0 is certainly more capable than AMD’s existing Fidelity FX sharpening, and it does so without damaging performance. AMD’s solution doesn’t look as good and has a mild performance penalty, but the option is there — it’s just not hardware-accelerated in the same way as Nvidia’s Tensor cores make possible.

AMD has promised it’s working on a new “super resolution” feature, which is likely to be a more open-standard than Nvidia’s DLSS, but details remain thin on the ground. The 6800 should support it at some point, but we don’t know if it will be hardware-accelerated in any bespoke fashion. For the time being, the RTX 3070 certainly has the edge on upscaling for looks and performance.

Ray tracing is something Nvidia RTX cards have had since the 2000 series, using RT cores to accelerate something that otherwise cripples even powerful GPUs like the GTX 1080 Ti. AMD introduced ray tracing support for the first time with its RX 6000 series (and RDNA2-driven next-generation consoles), with the 6800 set to offer full support for DXR-driven games as well as enhancements to improve performance and visuals like variable-rate shading and denoising. It will likely Support Dirt 5 and a few existing ray-tracing games at launch that use DirectX12-driven ray tracing, as well as support upcoming ray-traced games like Godfall, World of Warcraft: Shadowlands, and Far Cry 6.

The RX 6800 will have 60 Ray Tracing Accelerators (one per compute unit), and early third-party comparisons with AMD’s own numbers suggest that the 3070 will be better at ray tracing. Some results grabbed by VideoCardz show the RTX 3080 handily beating the RX 6800 XT. This is just one benchmark, however, and not a direct comparison between the two cards in this head to head, so more information and testing is required to say which card is better at ray tracing.

Smart Access Memory is an intriguing addition from AMD, which has the potential to make all-AMD PCs much faster than Intel and Nvidia combo PCs across the aisle. It works by letting the RX 5000 CPU leverage spare (and fast) GDDR6 memory on the RDNA2 card for additional performance. You do need a Ryzen 5000 CPU and 500-series chipset, though, which could make it a niche feature until those components are more common.

Too soon to call

At the end of October 2020, before the RX 6800 is available or reviewed, it’s too early to say whether it’s better than the RTX 3070 or not. What is exciting, however, is that both cards should be competitive on all fronts. There’s the potential for the RX 6800 to be the slightly faster card, especially when paired with an AMD Ryzen 5000 CPU, but we don’t know much about its ray tracing support or what kind of performance impact that may have in supporting games.

It also doesn’t have a DLSS-like feature just yet, which gives the RTX 3070 a huge leg up in supporting games. The 3070 will also be the cheaper card, at least if it stays in stock long enough for price gouging not to be a problem. Considering how the launch of the 3080 and 3090 went, the 3070 may end up being more costly in the near future.

For now, both cards look like excellent ways to game at 4K and 1440p, with and without ray tracing enabled. If you’re on the fence and unsure which you want, wait for real benchmarks and for more ray-tracing information from AMD. The potential is there for either to be a stellar next-gen card for your PC upgrade, but it’s not clear just yet which is best.

Solid deals on TVs are always expected on Black Friday, and today is no different. Below we've rounded up a
Read more

MacRumors Giveaway: Win a 9-in-1 USB-C Adapter From Choetech

For this week's giveaway, we've teamed up with Choetech to offer MacRumors readers a chance to win a 9-in-1 USB-C
Read more

Apple M1 Chip: Everything You Need to Know

Black Friday is halfway done, but there are still a few deals to shop for on iPhones at carriers like
Read more