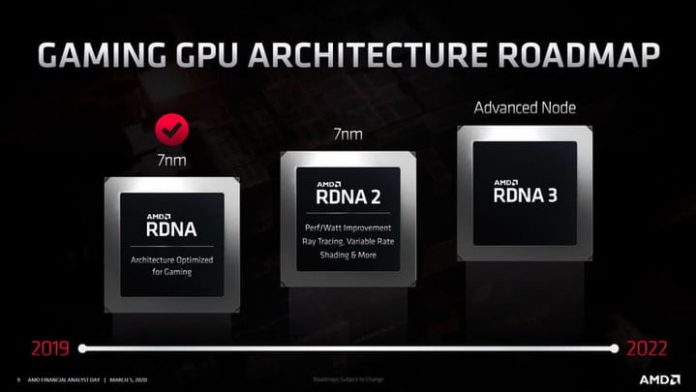 After trailing rival Nvidia in the high-end GPU space, AMD finally has a high-end graphics card — complete with real-time ray tracing capabilities — in the form of the new Radeon RX 6000 family.

AMD is formally taking the wraps off its Radeon GPU. This new graphics card allows AMD to go head-to-head with the competing Nvidia GeForce RTX 3080 GPU. AMD teased the design and specifications of its Radeon card prior to launch, with executives poking fun at Nvidia by stating that the AMD GPUs won’t suffer the same shortage issues as the flagship GeForce card.

Unlike Nvidia’s PC-centric GPUs, the RDNA 2 architecture — also referred to as Navi 2x and nicknamed “Big Navi” by devoted gamers — that’s powering AMD’s GPU will not only be headed to gaming PCs and workstations, but will also be found in next-generation consoles, like Microsoft’s Xbox Series X and Sony’s PlayStation 5, this holiday season.

One of the first PC graphics cards to utilize AMD’s RDNA 2 architecture is the new Radeon RX 6800 XT, which is designed for 4K gaming.

“The 6800 XT is purposefully designed to play all of your favorite AAA games at 4K and below resolutions, and at the highest-quality settings available,” AMD’s team stated.

During AMD’s presentation, the company positioned the RX 6800 XT against Nvidia’s flagship RTX 3080 GPU, showing that its card can also perform in 4K at 60 frames per second (fps).

AMD next announced its most affordable new card, the Radeon RX 6800. Priced at $580 and coming November 18, the card was pitted against the RTX 2080 Ti in AMD’s benchmarks.

Based on pricing, AMD clearly intends this card to be a competitor to the Nvidia RTX 3070, though the Radeon RX 6800 is a bit more expensive.

One key difference highlighted by AMD is the RX 6800’s memory. It will have 16GB of GDDR6 memory, which is a lot for a $580 graphics card. AMD is pitching this as a better solution for 1440p and 4K gaming.

Finally, AMD announced the RX 6900 XT as “one more GPU” to close the show.

“We knew that the RDNA 2 architecture could give gamers even more,” AMD CEO Lisa Su stated while unveiling the Radeon RX 6900 XT. This is AMD’s most powerful GPU that launched today and is built for “the ultimate in 4K gaming performance.”

The GPU ships with 80 compute units with a 2.25GHz boost clock and 16GB of GDDR6 memory. The 6900 XT has a 300-watt TDP, hitting 65% more performance per watt than the prior RDNA architecture.

With 4K at the highest settings, the 6900 XT was shown to be competitive with the RTX 3090 from Nvidia.

This GPU will be available on December 8 starting at $999.

Here’s a summary of each card.

“2020 is the year of the gamer,” Su proclaimed during the Radeon keynote presentation. AMD called it the most powerful GPU ever built, offering 50% better performance than last year’s RDNA architecture that it replaces, which already offers a 50% performance-per-watt over the old GCN architecture.

Though AMD is using the same 7nm process node as the prior RDNA platform, Su and her team say the company made significant process and architectural improvements to push for better performance-per-watt.

The company worked with Microsoft to bring DirectX 12 Ultimate features, such as DirectX ray tracing, variable rate shading, mesh shaders, and more into the architecture of RDNA 2. The platform will also support Microsoft’s Direct Storage API, which should help games load much faster with minimal lag.

Another key feature is AMD Smart Access Memory, which can unlock more high-speed memory for gamers using a Ryzen processor.

“AMD Smart Access Memory unlocks the greater amount of high-speed memory from the AMD Radeon RX 6000 series graphics cards to the AMD Ryzen 5000 series processors, and it delivers additional levels of performance in games,” the company said of the feature.

When Rage Mode is combined with Smart Access Memory, gamers can see up to a 13% uplift in performance.

Radeon Anti-Lag and Radeon Boost help to reduce latency that works with monitors supporting AMD’s FreeSync technology. This helps reduce latency by as much as 37%, AMD said, in games like Fortnite.

“For select games, Radeon Boost offers dynamic resolution in response to your mouse or controller inputs, leading to higher frame rates, and as a result, quicker responses to your input,” AMD said.

Ray tracing will be supported on these GPUs, and DirectX 12 Ultimate will also be supported. There are more than 35 titles with announced support including Godfall, FarCry 6, Dirt 5, World of Warcraft, and  The Rift Breaker.