The Acer Chromebook Spin 311 is a minimalist machine meant for students and those with lightweight, everyday computing needs. It’s a simple device, but sometimes simple is what gets the job done. If you’re looking for an affordable, usable piece of hardware, the Spin 311 could be it.

We put this Chromebook through the wringer in the Android Authority Acer Chromebook Spin 311 review.

Acer Chromebook Spin 311
An easy choice for most people

If you need something simple to use around the house or give the kids, the Spin 311 makes a lot of sense.

About this Acer Chromebook Spin 311 review: We reviewed the Spin 311 after using the Chromebook for more than a week. It was running the latest version of Chrome OS and did not receive any updates during the review period. Acer supplied the review unit to Android Authority.

What is the Acer Chromebook Spin 311?

The Spin 311 is a $300 convertible Chromebook that claims to offer solid performance and all-day battery life. It’s a value play. Acer sees it as an affordable device that covers a range of use cases for general consumers and students in particular.

As the name implies, this is an 11-inch Chromebook. Acer kept the size (290 x 206 x 18.8mm) and weight (1.05kg) in check. The sturdy plastic means it has some weight to it, but it is easy for even the youngest users to tote around. It fits in most backpacks without issue. This machine may be able to take some knocks, but it’s not officially ruggedized. Similar to other Chromebooks in this class, the design isn’t necessarily meant to inspire. It only comes in one color, silver, and looks exactly like a sub-$300 Chromebook should. The top of the lid has a metallic finish with a reflective Acer logo. The back half of the Chromebook is a bit thicker than the front, which tapers towards the edges. Some people may find it somewhat boring. Acer kept it simple.

The hinge feels great. Its action is smooth as you open the lid, and the hinge holds it at whatever angle you wish.

The hinge feels great. It’s a 360-degree design that allows you to use the Spin 311 in a number of configurations, including laptop, tent, or pad. The action is smooth as you open the lid, and the hinge holds it at whatever angle you wish. Port selection is a bit thin. The left edge houses a USB-C port (USB 3.1 Gen 1), headphone/mic jack, and the power button. Along the right, you’ll find a USB-A port, as well as the volume toggle and Kensington lock slot. Another USB-C port would have been nice, so you could charge the Chromebook and connect to a peripheral at the same time. 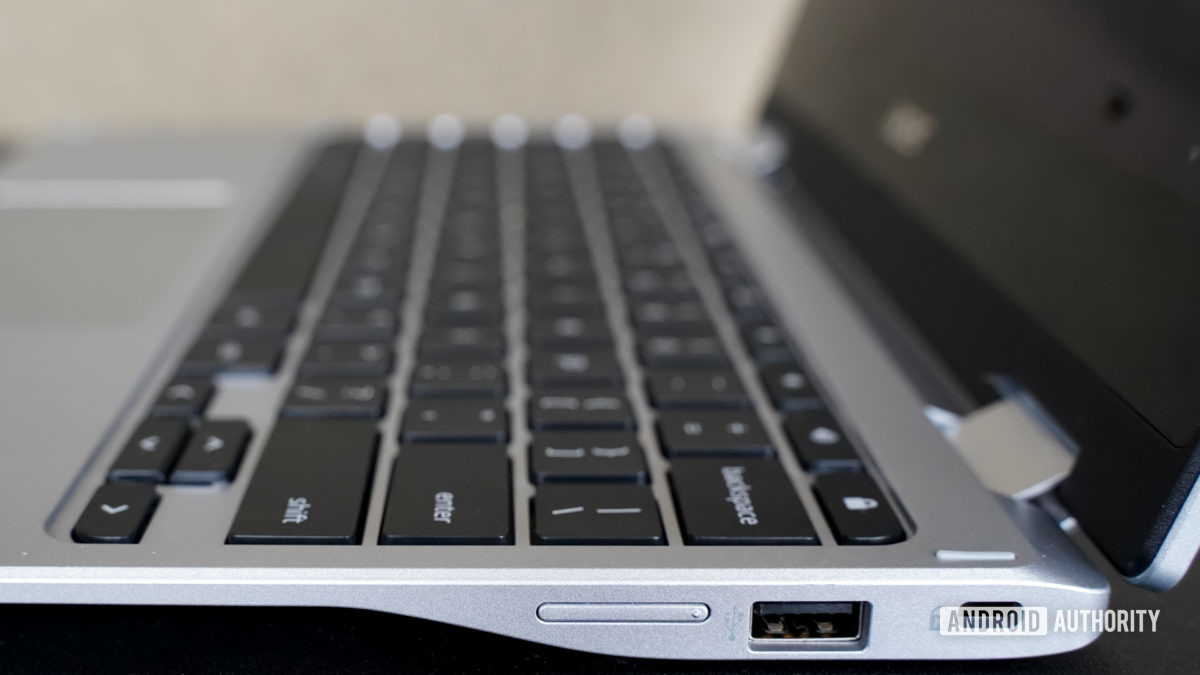 In all, the Acer Chromebook Spin 311 has a minimal feature set that matches its low price. 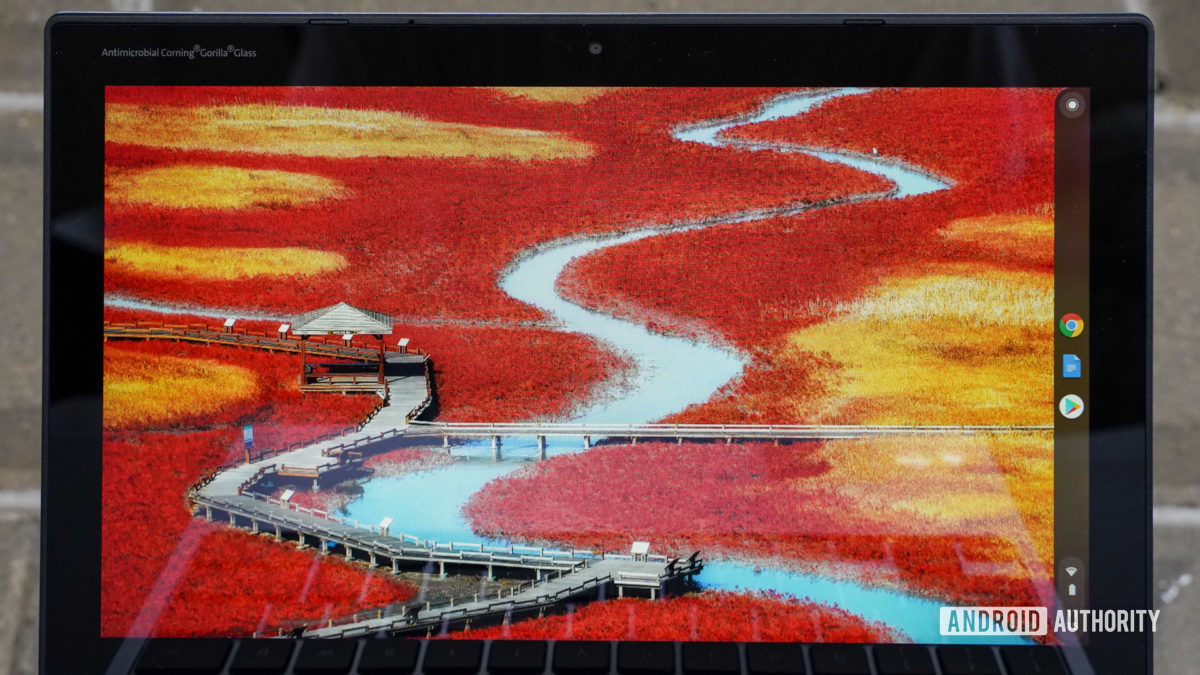 The Acer Chromebook Spin 311 offers a single screen option. It measures 11.6 inches across the diagonal with a 16:9 aspect ratio. The IPS LCD display has a fairly low pixel count at 1,366 x 768, making for HD resolution. However, this is a common size and resolution at this price point. The touch screen is covered by antimicrobial Corning Gorilla Glass and has wide viewing angles.

The screen gets the job done, but it isn’t particularly impressive. Resolutions this low look grainy to my eyes, though the size of the pixels helped dispel that somewhat on the Spin 311. Brightness is decent but could be better. The main menu and home screens looked good, as did the usual slew of apps such as Chrome and Google Docs. Videos I played on YouTube looked just okay. Younger users likely won’t care about the resolution. 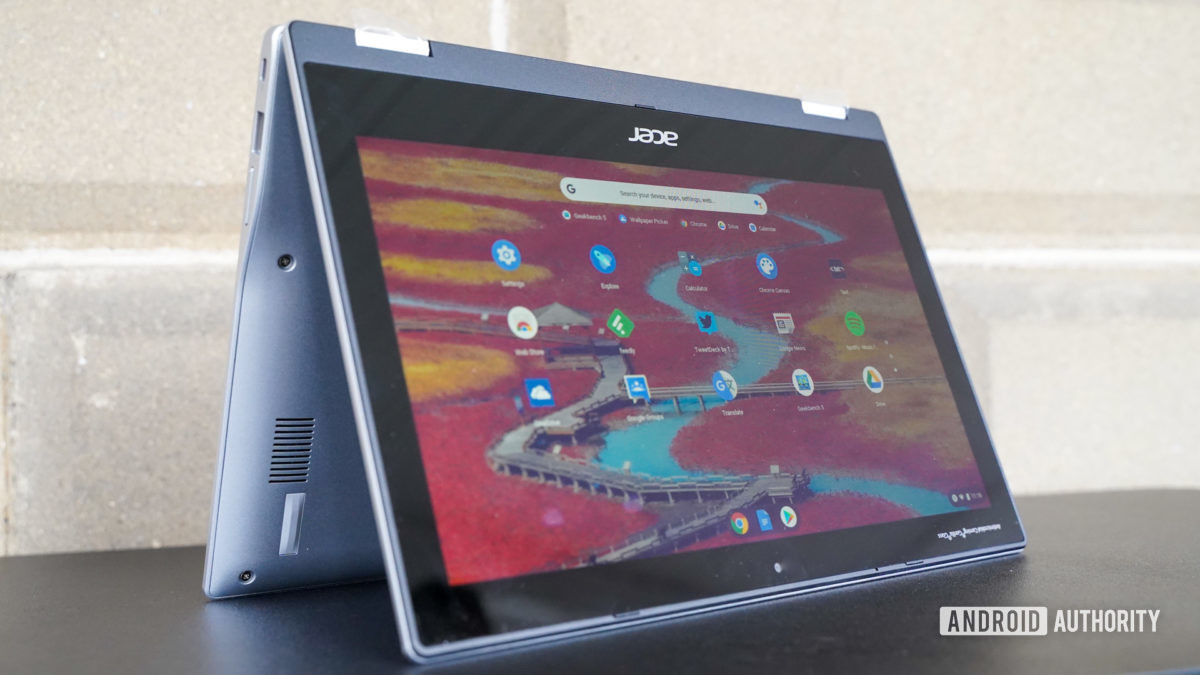 Nevertheless, I do have a couple of complaints. First, the bezels. Holy mother, this thing has some of the chonkiest bezels I’ve ever seen. My guess is Acer could have crammed a 13.5-inch screen in this chassis if it had wanted to. As it is, the 11.6-inch display is practically swimming in the thick black border surrounding it. Second, the glass has a glossy finish to it. I noticed it was quick to collect fingerprints as I touched the display. Speaking of which, the touch display was responsive and quick.

The screen is on par for this class of device, so I can’t be too hard on it.

What about the keyboard? 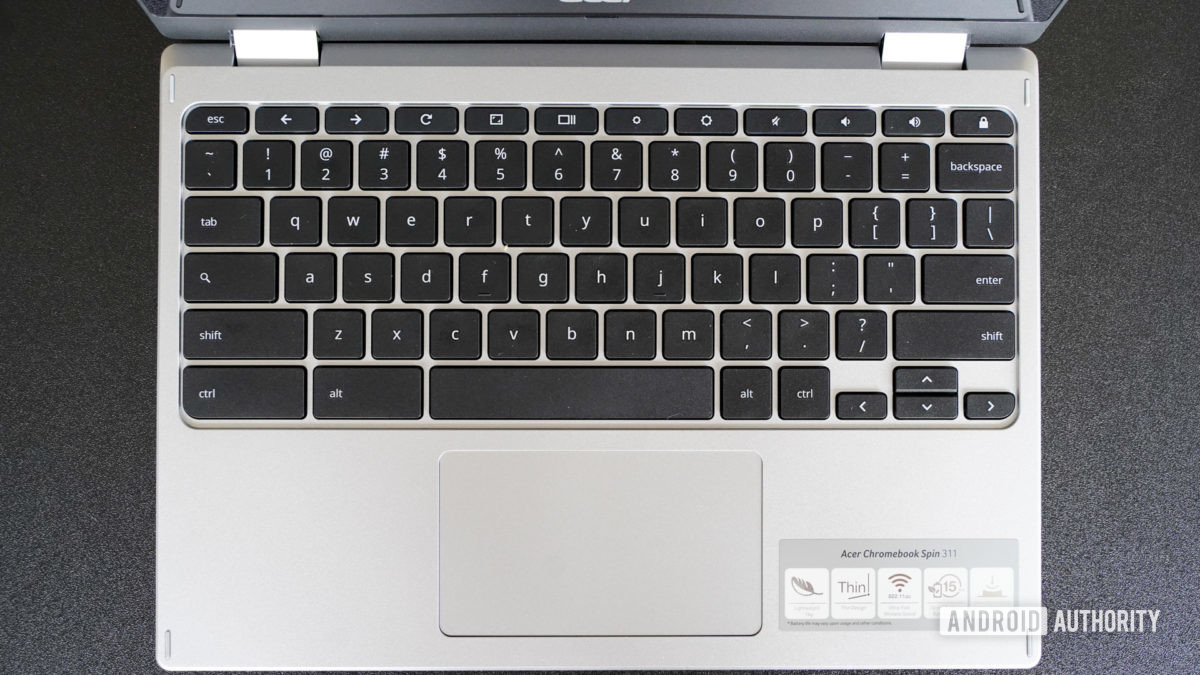 The keyboard is totally solid. Acer says it has re-engineered it compared to previous models, giving the keys a new concave shape and greater travel (1.6mm). I found the keys to be responsive and clicky in just the right way. The keys definitely do not come across as loose or cheap, as is sometimes the case on hardware at this price point.

A full complement of Chrome keys lines the top of the keyboard. It allows you to control aspects of the Spin 311 in a cinch. I wish there were media control keys, but I get that this isn’t a media-focused machine. I also wish the keyboard was backlit (it’s not). Again, that’s a feature reserved for pricer Chromebooks. 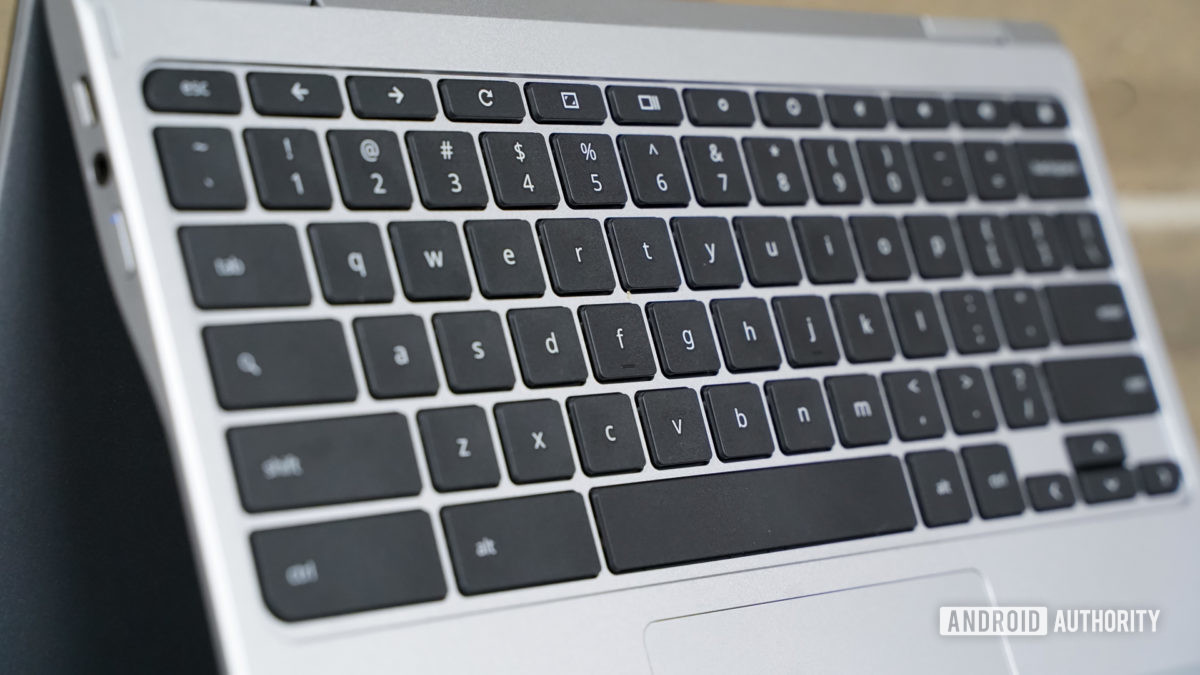 Acer could have also done a slightly better job with the trackpad. It could be a hair bigger and a bit more responsive. I couldn’t set the touchpad speed to my liking, which was a bummer. It’s not the high-quality glass touchpad we saw on the Acer Chromebook Spin 713 earlier this year. Again, however, general consumers and younger users may not have any problems with it.

How does performance fare? Acer did not engineer the Spin 311 to batter benchmarks. Instead, the company opted to balance the need for stalwart everyday speed with longevity. That means the device packs a MediaTek processor inside, rather than Intel.

To be specific, the Acer Chromebook Spin 311 review unit has an octa-core 2.0GHz MediaTek MT8183C processor on board, with a Mali G72 MP3 GPU, and 4GB of LPDDR4X memory. Our review unit came with 64GB of storage. There’s a second option with just 32GB of storage. The processor/RAM arrangement is the same across both storage options.

In daily performance, it managed to do quite well. I wasn’t blown away by the speed, but the device handled everyday tasks such as browsing the web, watching YouTube videos, and editing documents with no trouble. It managed to rate 261/918 for single- and multi-core scores, respectively, in Geekbench 5. That puts it on par with other $300 Chromebooks, though it’s far behind what’s available to higher-end Intel-based machines.

Chrome OS 84, on the other hand, ran smoothly on this machine — for the most part. Google’s lightweight operating system never felt slow or laggy. The app tray, which can misbehave on underpowered machines, was quick to open and scroll up and down. The only thing I noticed is that apps sometimes took an extra second or two to open or close.

The Acer Spin 311 powers through 15 hours of mixed use.

If there’s one shining feature of the Spin 311, it’s battery life. The two-cell, 4,670mAh/45KWh cell inside is rated for 15 hours and it consistently blew me away. The battery scored an incredible 17 hours of YouTube playback, and easily reached the 15-hour mixed-use mark time and again.

The Spin 311 relies on 802.11ac Wi-Fi 5, with 2×2 MIMO dual-band 2.4GHz and 5GHz on board. My home network is based on Wi-Fi 5 and the Chromebook ran really well on it. I didn’t encounter any buffering on YouTube or other network-related slowdowns. Bluetooth 4.2 is also aboard should you wish to connect peripherals, such as a mouse or headphones.

What I dislike about the Spin 311

Acer Chromebook Spin 311 review: Should you buy it? 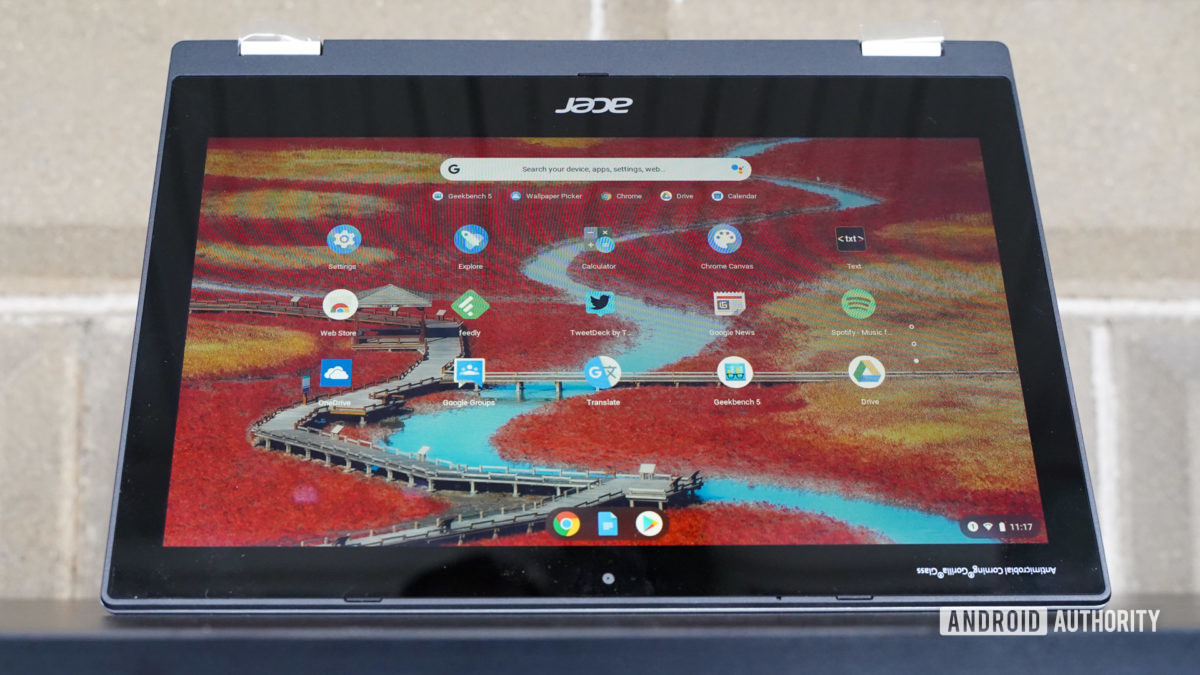 All things considered, Acer did a fine job with the Chromebook Spin 311. Those shopping around the $300 mark need to temper their expectations a bit. Even so, I found the 311 exceeded what’s to be expected at this price point.

The Chromebook is well-built and will easily stand up to daily use around the house. Its screen may be swimming in bezels, but it was relatively bright and punchy. The MediaTek processor offers the right balance of performance and battery life, which came in at a whopping 17 hours under ideal circumstances. Toss in the excellent keyboard, good speakers, and the convertible form factor, and you have a really solid little machine.

Acer Chromebook Spin 311
An easy choice for most people

If you need something simple to use around the house or give the kids, the Spin 311 makes a lot of sense.

Competition in the $300 space is fierce, but the Acer Chromebook Spork 311 is scrappy enough to hold its own.

Facebook
Twitter
Pinterest
WhatsApp
Previous articleScore the best price yet on Sony XM4 Wireless Headphones at over $70 off
Next articleInsider.Games: Your opportunity to learn all about games
- Advertisment -