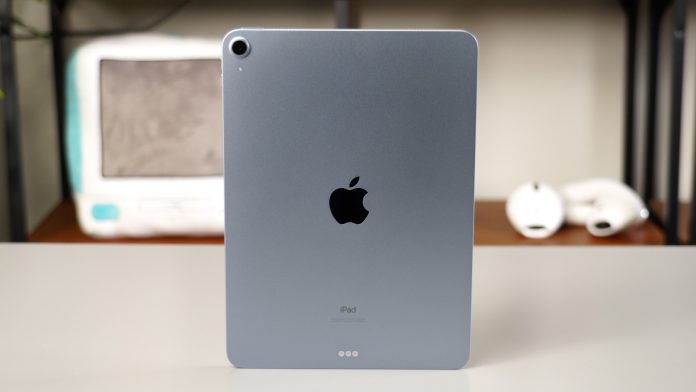 Apple announced the new 2020 fourth-generation iPad Air in September, but the new tablets just started shipping out to customers last Friday. We picked one up and thought we’d do a hands-on comparison with the iPad Pro, which was last updated in March, because both tablets are about as powerful and share many similarities. 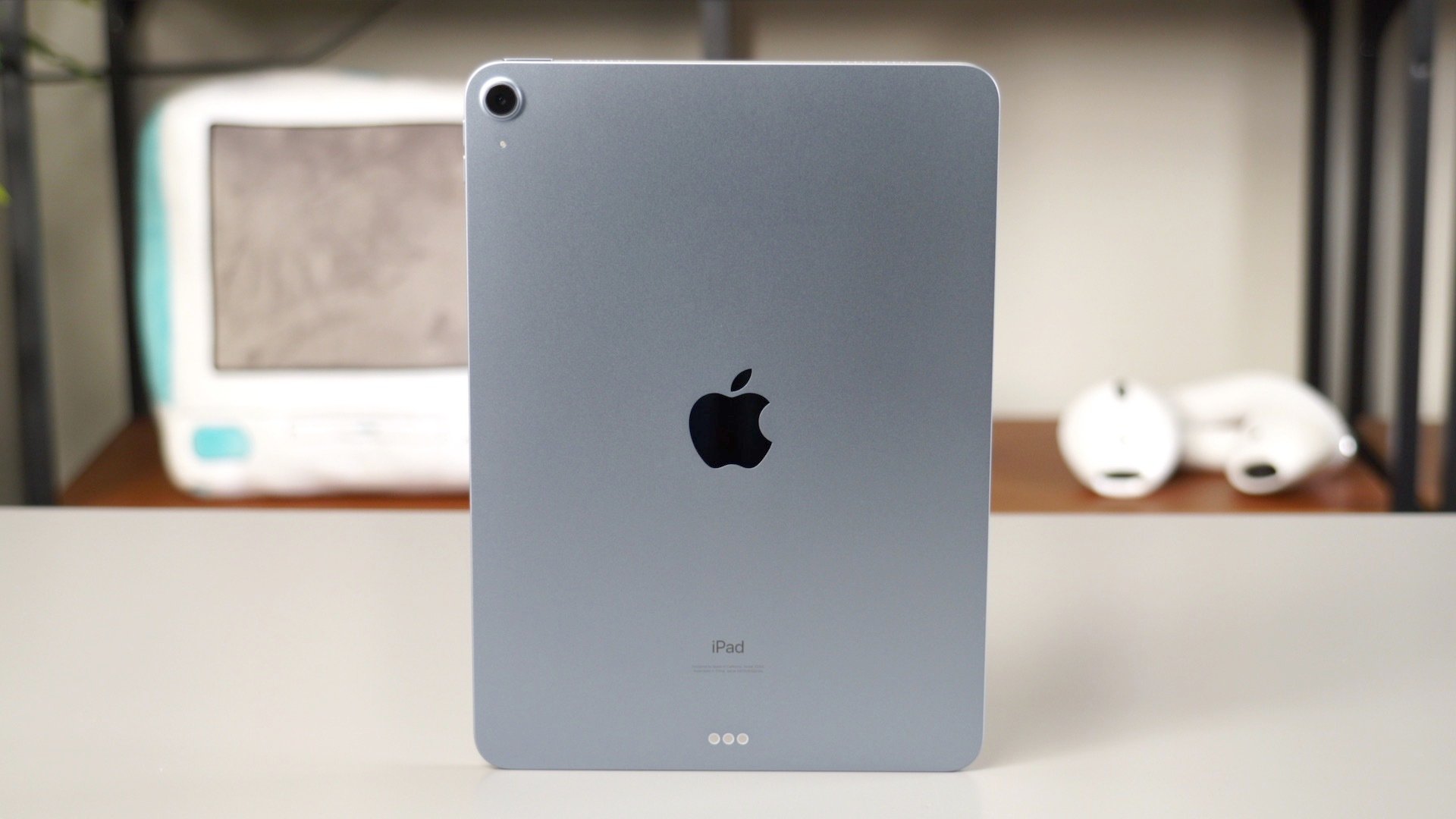 The ‌iPad Air‌ is just a bit smaller than the 11-inch ‌iPad Pro‌, and the bezels around the display are a bit thicker. It’s not a huge difference, but with both tablets side by side, it’s noticeable. Other than that, display quality is similar, with one notable exception: the ‌iPad Pro‌ supports 120Hz ProMotion refresh rates for smoother scrolling and a better overall experience. Is it worth shelling out more for an ‌iPad Pro‌ over an ‌iPad Air‌ just for ProMotion? Probably not, but it’s a noticeable omission that’s one of the bigger ‌iPad Air‌ downsides. 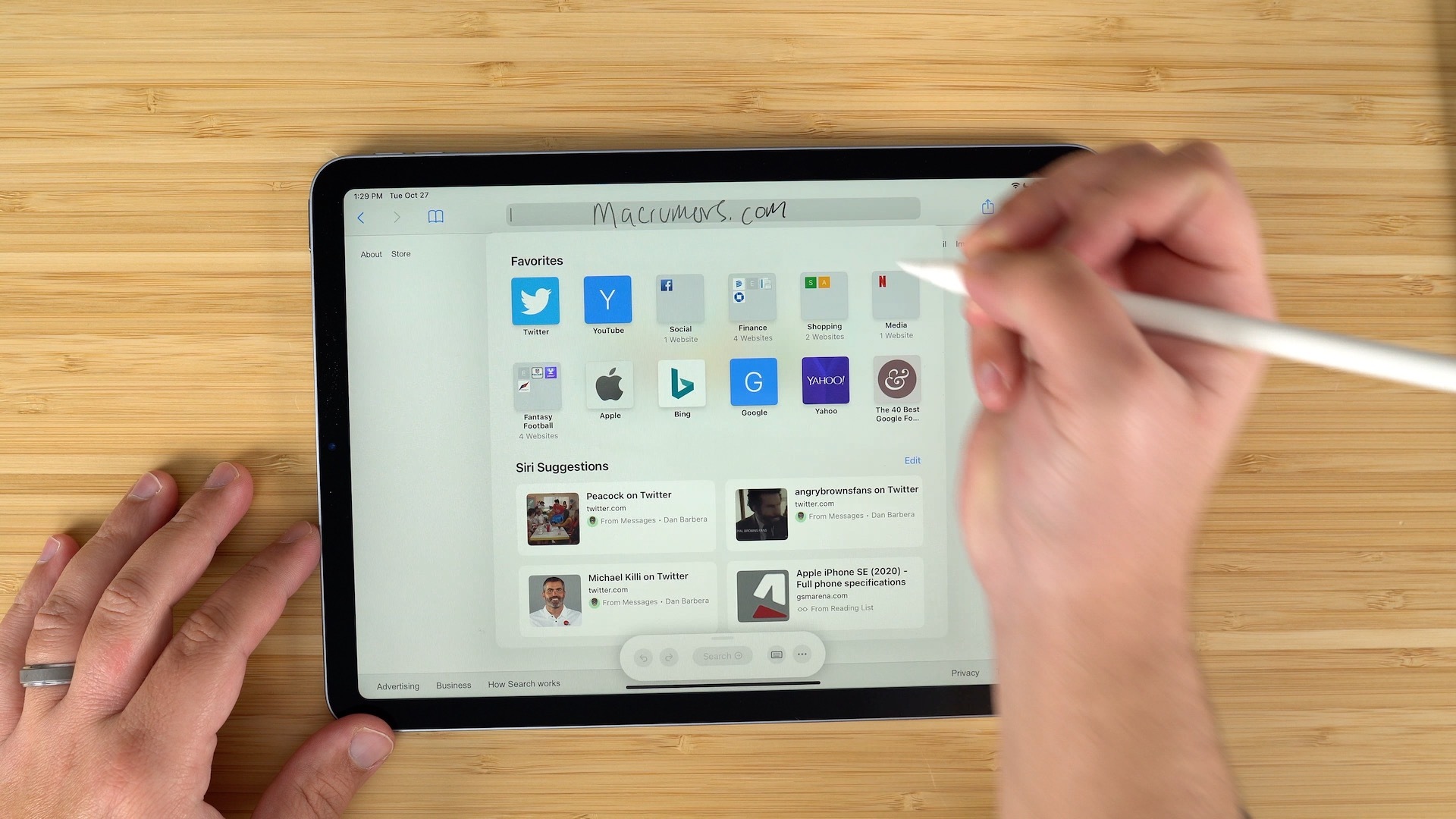 Both the ‌iPad Air‌ and ‌iPad Pro‌ support the Apple Pencil 2, and it’s worth noting that writing and sketching is somewhat smoother with the ProMotion display.

The ‌iPad Pro‌ is equipped with a TrueDepth Camera System that works with Face ID to unlock the iPad through facial recognition, while the ‌iPad Air‌ returns to an old favorite: Touch ID. There’s no ‌Touch ID‌ Home button, but there is ‌Touch ID‌ built into the power button at the top of the device. It’s fast and effortless, but you do need to reach up to the top of the ‌iPad‌ to unlock it, and it’s not as seamless of an experience as Face ID, especially when you’re using accessories like the Magic Keyboard. On ‌iPad Pro‌, you can wake it with the keyboard and then it instantly unlocks after scanning your face, but on ‌iPad Air‌, this is a two-step process.

The ‌iPad Air‌ has a single-lens wide-angle rear camera and no LiDAR Scanner, while the ‌iPad Pro‌ has a dual-lens camera with wide-angle and ultra wide-angle lens options, along with the LiDAR Scanner for enhanced AR capabilities. If you don’t use your ‌iPad‌ for pictures this should be no big deal, and the same goes for those who aren’t into augmented reality apps. Both have the same front-facing 7-megapixel camera, but the ‌iPad Pro‌ has TrueDepth camera features too.

The ‌iPad Air‌ has four speaker cutouts like the ‌iPad Pro‌, but there are only two stereo speakers instead of four. There’s a definite difference in sound, and the ‌iPad Pro‌ comes out ahead.

The ‌iPad Air‌ has the same A14 chip that’s in the ‌iPhone 12‌, while the ‌iPad Pro‌ is using the older A12Z chip. In our Geekbench tests, the ‌iPad Air‌’s A14 came out on top, but the A12Z has an extra GPU core that gives it the edge when it comes to GPU performance. We haven’t noticed differences in photo or video editing, though, and both are capable devices. 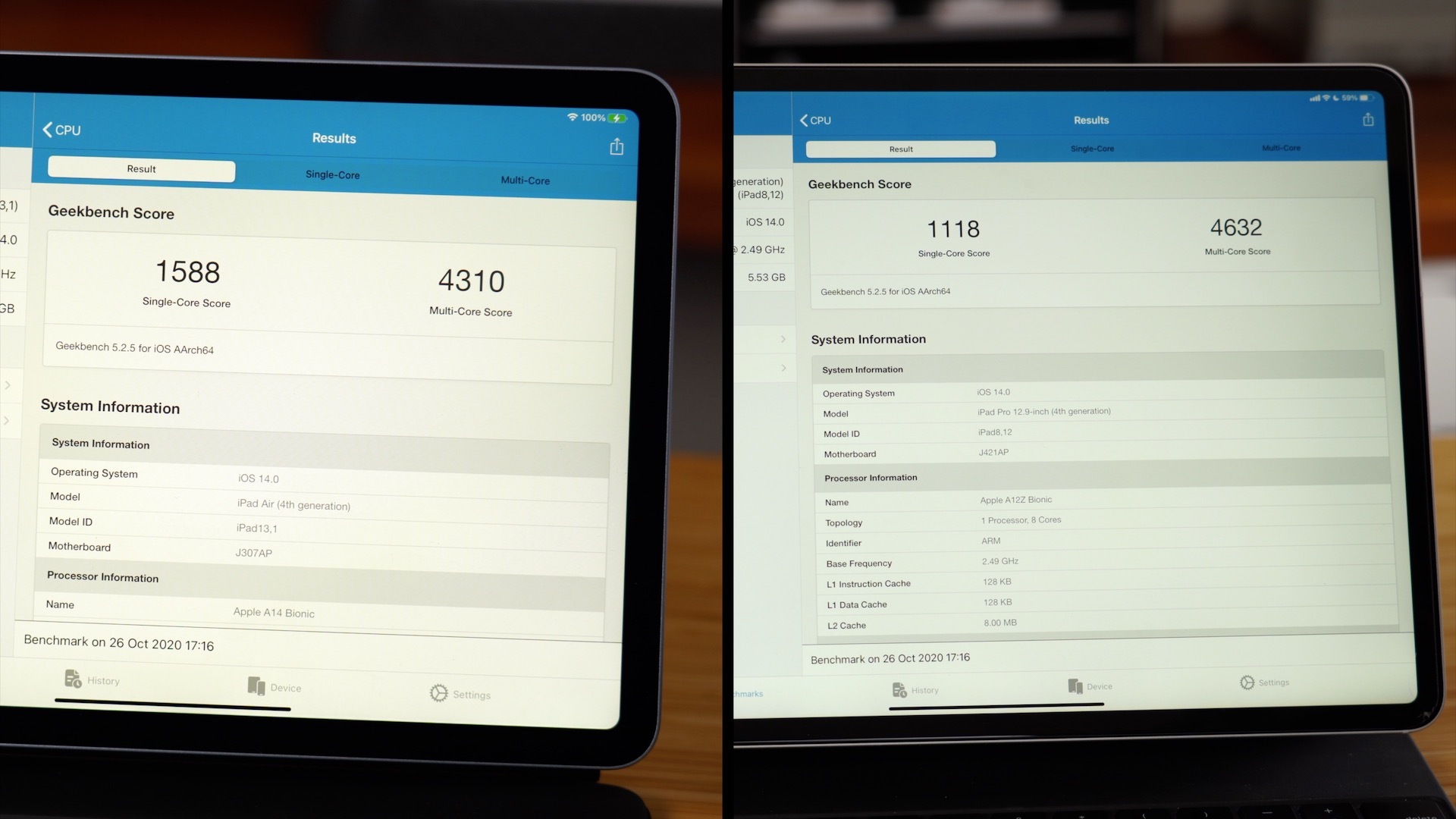 As for RAM, the ‌iPad Air‌ has 4GB and the ‌iPad Pro‌ has 6GB RAM.

Battery life seems to be about the same between the ‌iPad Air‌ and the ‌iPad Pro‌. Apple advertises 10 hours of surfing the web and video playback for both. 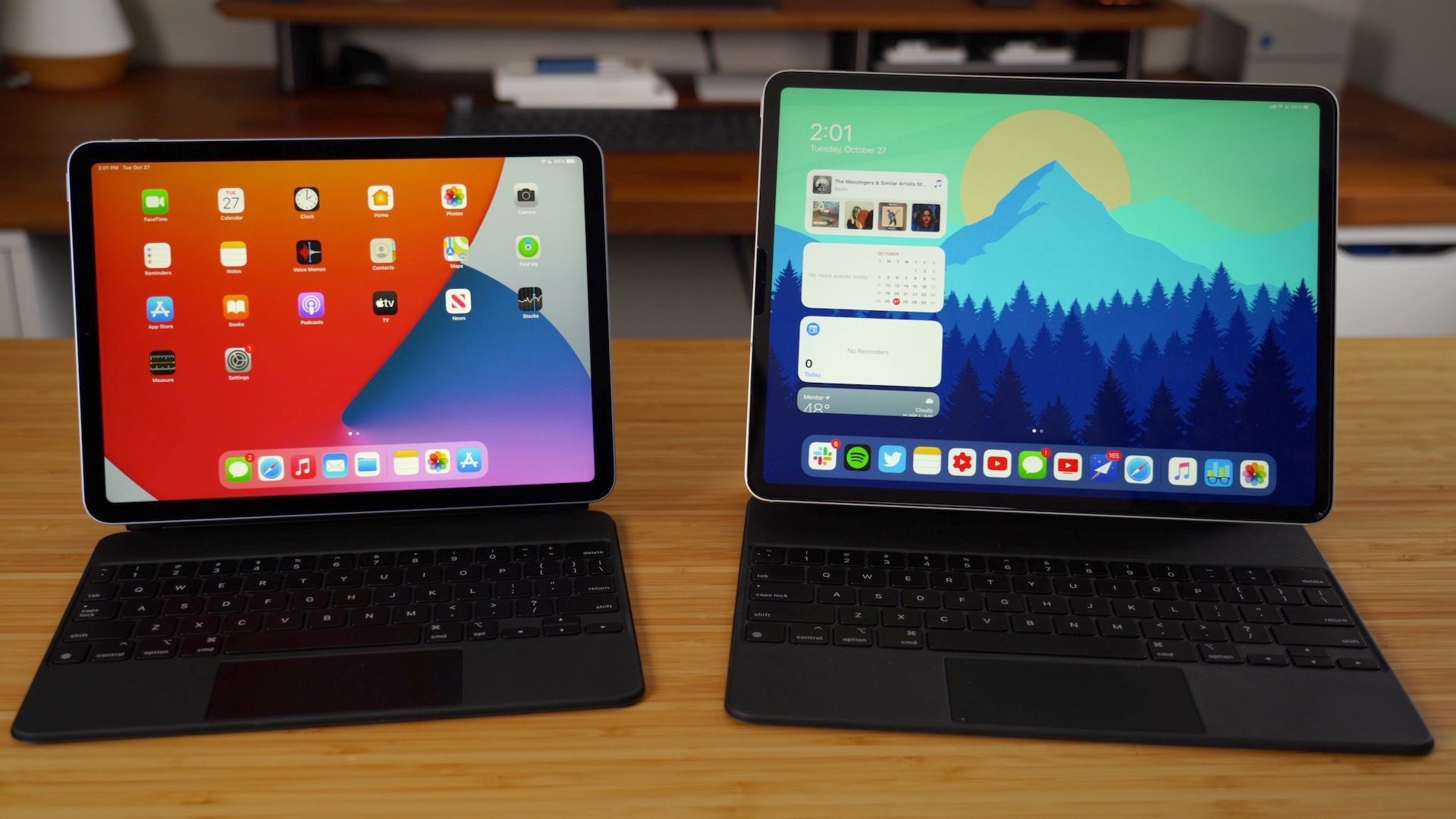 The ‌iPad Air‌ is much more affordable than the ‌iPad Pro‌ if you can work with 64GB storage, but that may not be enough for some people. $799 for the 128GB ‌iPad Pro‌ vs. $749 for the 256GB ‌iPad Air‌ is a smaller price differential and something to keep in mind if 64GB storage isn’t enough.

For most people, the ‌iPad Air‌ is the ‌iPad‌ to choose. It’s more powerful with the A14 chip and offers many of the same features, plus it has ‌Touch ID‌ for those ‌Touch ID‌ fans out there. It lacks when it comes to the display because it doesn’t have ProMotion, but it’s more affordable, faster, and available in better colors, all of which give it an edge over the ‌iPad Pro‌ at this time.