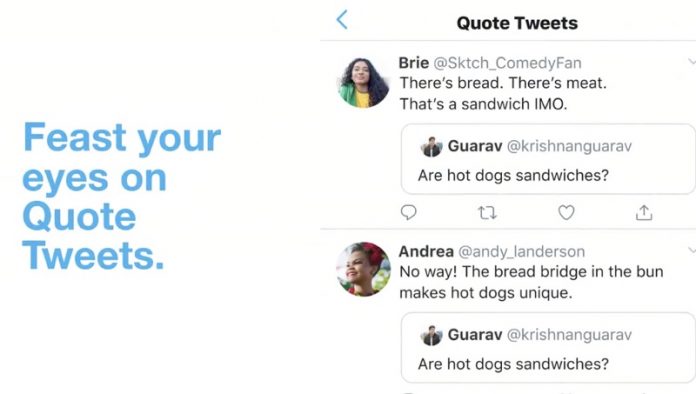 Twitter today announced the official rollout of its new Quote Tweets feature, which is designed to make tweets about a tweet easier to located.

Twitter is now calling retweets with comments Quote Tweets, and Quote Tweets are now visible when tapping into a tweet and selecting the “Quote Tweets” option to see all quoted replies in one spot.

Viewing Quote Tweets shows the original tweet along with the commentary, and photos, videos, and GIFs are included.

Tweets about a Tweet add more to the conversation, so we’ve made them even easier to find.

Retweets with comments are now called Quote Tweets and they’ve joined the Tweet detail view. Tap into a Tweet, then tap “Quote Tweets” to see them all in one place. pic.twitter.com/kMqea6AC80

Before implementing the new Quote Tweet feature, these kinds of tweet replies were treated as regular tweets, which could make it harder for the original creator to view and respond to replies. The new Quote Tweets feature is available on Twitter on iPhone and iPad.Tag: Twitter
This article, “Twitter Makes Retweets With Comments Easier to Find” first appeared on MacRumors.com