The best apps and websites for tracking wildfires 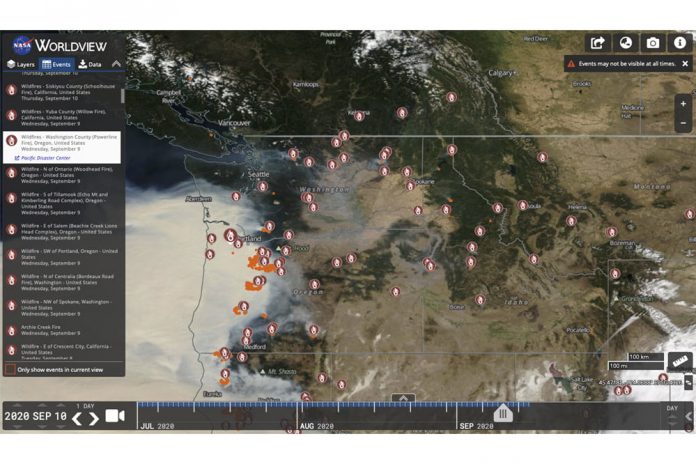 As the disruptive effects of climate change descend on the planet, one manifestation of its presence is extremes of melting arctic ice, rising ocean levels, intense hurricanes and tornados, and persistent wildfires. While in the past, it was primarily scientists, meteorologists, universities, the government, and hobbyists who tracked wildfires, these days a sizable portion of the population now either lives in a fire zone or knows someone who does. That personal connection with wildfires brings online tools and mobile fire-tracking apps into the spotlight.

A number of informative websites help you to track both emerging and historical wildfire activity and escape routes, while apps, synced to that information, let you check the status whenever you want. Many apps and sites use sources like InciWeb, a U.S. interagency incident management system run by the National Wildfire Coordinating Group, which collects wildfire incident data. They may also derive data from Cal Fire, the U.S. Geological Survey, NASA, and a host of other U.S. government agencies that monitor wildfires all over the world.

Here are some of the high-quality sites and mobile apps we found for tracking wildfires.

The WorldView section of NASA’s website lets you customize your view of any number of climactic events, including wildfires. Choose from a large array of recent events, and then add layers to customized maps that clarify information about your topic. Layers may include a large number of hazards and disasters or scientific disciplines. A featured section lets novices zero in on popular ways to view and analyze the data. A data column superimposes overlays of additional information as you click the various choices. The site is visual and lets you see both current and past information in a pleasing way.

The Fire, Weather, and Avalanche Center, a 501(c)(3) non-profit, helps you stay updated on the latest wildfire, weather, and snow information. It lets you view where the most current fire activity is going on near your location. So, with a click, you can see where the fires are. The site makes user-friendly services and information accessible to the public while emphasizing backcountry locations where information is often hard to collect.

With the Fire Finder app, you can easily look up information and images of any wildfire in the U.S. It maps fire outbreaks on a satellite map and lets you search for the fire you want to follow. It maps wildfire locations and fire perimeter data, features a sharable photo gallery, and provides fire information from a host of state and federal sources, like InciWeb and Cal Fire.

If you’re tracking wildfires around the globe, Wildfire Info gets you up-to-the-minute details about current wildfires and prescribed burn activity for locations in the U.S., Canada, Europe, Australia, and more. It features Integrated Reporting of Wildland Fire Information (IRWIN) current wildfire perimeters. Though not live, the data is updated every five minutes to track changes to perimeters posted to the National Incident Feature Service (NIFS), derived from operational data as opposed to ground conditions. Thermal hotspot maps by region show wildfire activity in the past 48 hours from the NASA MODIS and VIIRS satellites. The app also includes InciWeb and Cal Fire active fire maps, new wildfire weather and situation reports, CHP incidents, and an aggregated wildfire news wire.

With Firesource, you get a live fire feed that updates upon refresh and settles into a scrollable menu to follow wildfires across the U.S. It also tracks user-reported fires and let you report a fire and upload an image of it. It derives information from InciWeb and Cal Fire in real time, providing the fire’s location and a detailed status. Allowing app users to report a fire and immediately inform other users is an essential role for Firesource. To ensure fire report validity, users must take a photo of the fire and cannot access Camera Roll to select an image. Observers can rate a fire report by confirming that it is active, contained, or spam.

Developed by The National Center for Landscape Fire Analysis at the University of Montana’s College of Forestry and Conservation, this professional tool (still in beta) provides an abundance of data sharing and research. The newest version includes anonymous weather observations shared with researchers at the University of Montana to support research in weather prediction, analysis, and content display. The app allows quick calculation of RH, Fine Dead Fuel Moisture (FDFM), and Probability of Ignition (PIG) based on standard fire line weather observations. The app also lets you archive and share observations via email, Dropbox, and Google Drive.

Best answer: Not yet. While Wi-Fi 6E will offer a solid upgrade to those living in dense areas, the increase
Read more

The acquisition is complete — now it's time to speculate.It finally happened. After first being announced in November 2019, Google
Read more

The development is the latest indication of a growing interest in unionization among tech workers.What you need to knowGoogle employees
Read more

Google is turning its U.S. offices into COVID-19 vaccination sites

Google is also partnering with public health agencies to provide vaccine-related information to underserved communities.What you need to knowGoogle is
Read more