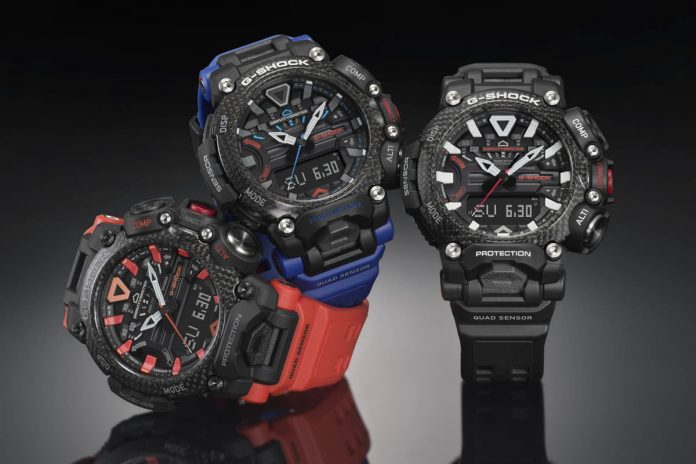 Casio has adopted a brand new asymmetric design for its Gravitymaster range of high performance watches, taking one of the most popular design styles from the Frogman line of dive watches, and applying it to the aviation-focused models. The GRB200 follows previous Gravitymaster watches by having a Bluetooth connection too.

The multiple buttons on the case are set at different angles to make pressing them more natural, especially when wearing gloves, and the overall design mimics the look of an aircraft’s joystick. It’s a striking look, especially when paired with the blue or orange resin straps, although there is a black version if you’d prefer something a little more incognito.

G-Shock has chosen its Carbon Core Guard construction for the case itself. The blend of carbon fiber and resin is extremely strong, and almost certainly enabled the designers to use relatively small guards around those giant buttons, without sacrificing durability. A semi-transparent top layer has been applied to the bezel, revealing the carbon weave underneath.

Connect the GRB200 to your smartphone and the G-Shock Connected app and you can access the Mission Log feature, which takes altitude data from the watch and GPS data from the phone to plot a flight course. There’s a waypoint navigation feature too, where the watch’s second hand will point to a set location marked in the app. Like the recent Mudmaster watches, the Gravitymaster counts steps and calories, but also adds altitude data into the mix too. The app also allows you to change the world time, set timers, and activate the stopwatch.

The GRB200 is not a top-of-the-line G-Shock and therefore does not come with the brand’s Tough Solar solar charging feature, and instead relies on a battery to function. It doesn’t need charging though, and should last for at least a couple of years before it needs to be replaced. This is a G-Shock, so it has 200 meters water resistance, and withstands shocks and vibration too. The Quad Sensor array has a thermometer, an altimeter/barometer, a compass, and an accelerometer.

G-Shock will release the new Gravitymaster GRB200 watch in September when it will cost $350.

Facebook
Twitter
Pinterest
WhatsApp
Previous articleHonor’s outdoor Watch GS will get you home even when your phone’s GPS gives up
Next articleHuawei Watch Fit hands on: The skinny Apple Watch