Home News Samsung is having another Unpacked event on September 23 — we have...
News 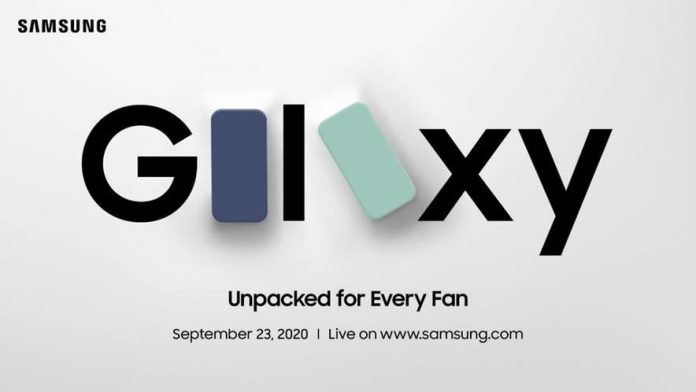 Samsung had its a big (virtual) Galaxy Unpacked event in early August, where it took the wraps off of the new Note 20 series and the Galaxy Live buds. Then, it had a second smaller Unpacked event where it launched the Galaxy Z Fold 2 foldable. Now, the company is doing a third launch event in less than two months, which it has scheduled for September 23, and is being marketed with the tag line “Unpacked for Every Fan.”

The jury’s out as to what this event is actually for. Samsung has sent out an invitation to the event, which includes a graphic with two phone-shaped blobs. That’s about all the clues we have so far as to what we’ll see on September 23.

Of course, we can always speculate. It’s possible that Samsung will launch “Fan Edition” versions of the phones that it has already launched this year. Or, perhaps we’ll see other devices and accessories that aren’t actual smartphones, but are instead related to the Galaxy ecosystem of products in some way. Or, maybe we’ll see the Bixby-based Samsung Galaxy Home smart speaker that was first announced over two years ago and has yet to be released. (Don’t hold your breath.)

It’s also possible that the event could be more software-related than hardware-related. Perhaps Samsung is using the fact that holding virtual events is relatively cheap compared to physical ones as an opportunity to put more eyes on the upcoming One UI 3.0 software release. A developer beta for One UI 3.0 was recently announced for the Galaxy S20, Galaxy S20+, and Galaxy S20 Ultra. So far, the beta is only for approved developers, and as such we don’t know exactly what kinds of new features are available just yet — but the operating system is built on Android 11. As such, the operating system will include things like better privacy controls, support for the new Chat Bubbles system, and more. You can check out our guide on all the new Android 11 features here.

The event will be held on September 23 at 7 a.m. PT, or 10 a.m. ET, and Samsung will be livestreaming the event straight from its website — so if you’re as curious as we are as to what to expect, be sure to tune in.