Home News Safari’s new update can tell which websites have tracked you in the...
News 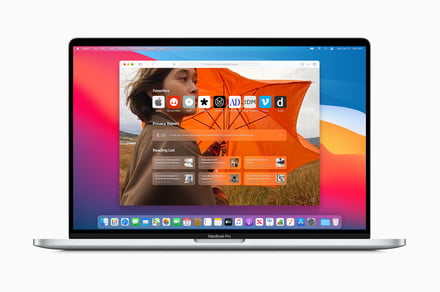 Apple didn’t publicly release MacOS’s next big release alongside the launch of iOS 14 and iPadOS 14. But you won’t have to wait for that to experience one of the MacOS Big Sur’s best features: Safari 14. Apple is now rolling out Safari 14 as a standalone update for existing MacOS Catalina and Mojave users.

Unlike other app updates, you can’t download Safari 14 from the App Store on your Mac. Instead, the update will be available under System Preferences > Software Update.

The new Safari update offers a host of both visual and under-the-hood improvements across the board. One of its highlights is a new privacy tool that lets you investigate which websites have tried to keep tabs on you with cross-site trackers. You can access it from the Safari dropbox > Privacy Report.

Safari’s landing page has been redesigned as well. In addition to a visual refresh, you will also find a shortcut for Privacy Report on the homepage and options for setting a custom background image — similar to Google Chrome. Plus, you can now choose to have a number of other sections right on the start page like Siri Suggestions and Reading List.

Further, Safari 14 adds a handful of long-overdue upgrades to the bar which shows all your open tabs. It now displays favicons by default and a preview of the website when you hover over its active tab. Another notable new feature is the addition of 4K HDR resolution support for YouTube videos.

On top of that, Apple has, at long last, discontinued support for Adobe Flash for better online protection. Flash apps are notorious for their lax security and are often misused to deceive users. Competitors such as Google Chrome have long abandoned Flash. Safari 14 is also expected to let you log into websites, that support Fast Identity Online (FIDO), with Face ID and Touch ID on iOS, iPad OS, and macOS but it remains unclear whether’s available yet.

MacOS Big Sur is still in its beta phase and Apple has not shared an exact launch date for stating a “Fall 2020” release window. It could announce its public launch at its forthcoming event where the company will also unveil its next line of iPhones.