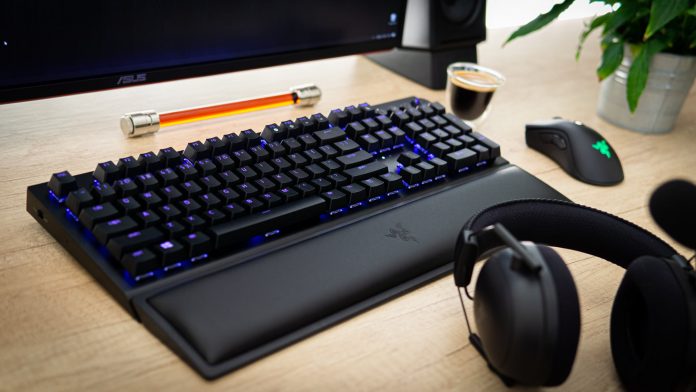 Despite Razer’s prowess in the gaming peripherals market, it has always lagged behind the competition when it comes to compelling wireless options. While the company did introduce its Hyperspeed wireless protocol, it only brought it to a small selection of mice. Today, Razer has finally caved and is expanding its ultra-fast wireless tech to all of its flagship SKUs.

With the release, Razer is dropping three new peripherals: The Deathadder V2 Pro mouse, Blackwidow V3 Pro keyboard, and the Blackshark V2 Pro wireless headset. We have all three here and will be giving you our impressions in this piece.

The Deathadder has always been Razer’s No. 1 gaming mouse, and over the years there has been increasing demand for a wireless version (just google “Wireless Deathadder,” and you’ll find endless threads of people begging for it). Why it took Razer this long to conjure one is unclear, but it’s finally here. Was the wait worth it?

If you ask me, absolutely. The Deathadder V2 Pro changes nothing about the shape of the mouse, other than slightly larger forward and backward navigation buttons on the side. The scroll wheel is a little lighter and more distinct than the last version, and without the cable to slow you down, you’ve got all the freedom of movement you could ever want.

It was immediately clear to me why the community has begged Razer to build a wireless Deathadder.

In-game, the mouse is also a dream, and it was immediately clear why the community has begged Razer to build a wireless version. This mouse is seriously great for fast-paced e-sports titles thanks to its light tweight, comfort, and precise sensor.

The shape lends itself well to both palm grips when going slow ‘n steady, or claw grips when fast precision is needed. The clicks are clear, and the concave mouse buttons guide your fingers right where they need to be.

Unsurprisingly, I’ll still put it aside for the day-to-day office use and grab a more ergonomic option. But for the one or two hours my gaming sessions last, the Deathadder V2 Pro has been a wonderful companion.

Let’s start with the massive wrist rest. It’s not perfect. I’d like a magnetic or mechanical system to fix it to the keyboard rather than having it slip around loose.

But boy, is it soft. Having worn out my fair share of keyboards over the years as a writer, I can say that this is hands-down the softest, plushest wrist rest I’ve encountered. Your hands just sink into it. However, despite its comfort, I do fear for its durability. On warm days my sweaty palms stick to it, and with the pleather material being thin and soft, I’m afraid that with sustained use, it’ll tear early.

The Blackwidow V3 Pro keyboard otherwise lives up to previous Blackwidow keyboards. It has a great tactile feel, seems tough, and is a joy to use. It’s essentially a wireless successor to the Razer Blackwidow Elite. It has the same layout, wrist rest, media keys, and the volume wheel. It truly is as complete as a keyboard gets. Now that it’s wireless, it has a fighting chance for a spot among our best wireless keyboards or best gaming keyboards.

The Blackshark V2 Pro wireless headset features soft, breathable fabric for the earcups and head cushion, so much like the keyboard, it’s incredibly comfortable. Razer took it easy on the styling, opting for black glossy logos and branding rather than green — a detail I appreciate.

When it comes to sound quality, I’m not going to pretend it’s as good as my wired Sennheiser cans that are plugged into a dedicated DAC, but it’s good enough. Personally, I’ll skip it for music, but I’m a bit of an audio snob.

I put the headset on during a three-hour writing session to keep myself focused with music, and although they’re not up to audiophile standards, they’re tuned nicely with a decent bit of bass, and I have to admit they did put a smile on my face — especially because I didn’t have the cable constantly tickling my arm and binding me to my desk.

In gaming, you forget all about sound quality anyway, and things like positional audio and freedom of movement become much more important. That’s where the Blackshark V2 Pro shines.

In gaming, things like positional audio and freedom of movement are most important.

I appreciate that I can quickly click the mute button and run to the bathroom, or to the kitchen for a cup of coffee while keeping the headset on. This means I don’t miss any of the conversations on the Discord channel, and I can continue to hear the game. So, when I hear the rumble of the battlefield, I know it’s time to run back to my PC and rejoin the match.

Its wireless range is impressive. My PC is stationed at the far end of my apartment, and I can walk almost all the way to the other side and continue to hear everything clearly — though the signal won’t travel through the thick, noise-damping door to my outside balcony.

Wireless as good as the competition?

All things considered, it’s safe to say that Razer has caught up with the competition with a series of flagship wireless peripherals. No longer do you have to choose between the practicality and looks of wireless options over the performance of their wired counterparts.

The only concession you’ll have to make is in pleasing the bean counters. The Deathadder V2 Pro is slated to cost $130, the Blackwidow V3 Pro $230, and the Blackshark V2 Pro will set you back $180. These are flagship prices for flagship products. While the build quality, performance, and looks are all there, you can purchase perfectly capable — though less attractive and impressive — wireless peripherals quite a lot less. Logitech is particularly good at balancing wireless performance with price, offering products like the Logitech G305 wireless gaming mouse for as little as $60.

If money isn’t an issue, however, Razer’s new Hyperspeed line is a superb option. And that, ultimately, isn’t a surprise. Razer has always catered to hardcore gamers with cash to spend instead of budget gamers looking for the minimal viable product. These new Hyperspeed products aren’t inexpensive, but they meet the high standards Razer fans will expect.