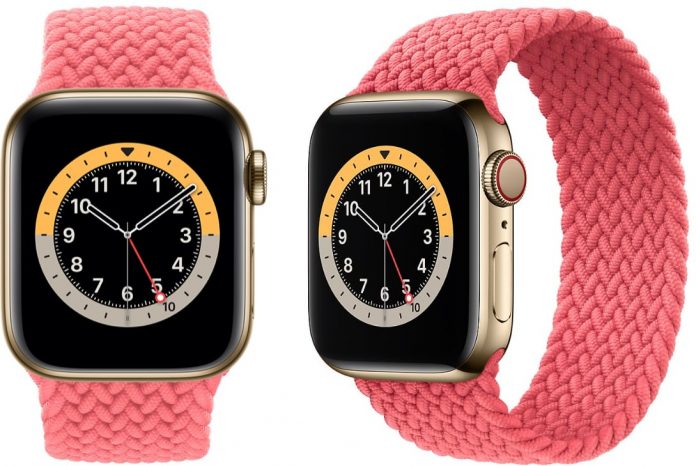 With the Apple Watch Series 6, Apple introduced two new band options, the Solo Loop and the Braided Solo Loop. These new bands are unique because they have no clasps, buckles, or other fasteners, and instead use a stretch design to allow them to pull onto the wrist over the hand.

Because these bands are not adjustable, Apple sells each one in nine different sizes to make sure each person gets a snug fit. To get the right sizing, Apple offers a printable tool [PDF] and also measurement comparisons so you can estimate size, but as it turns out, that sizing isn’t always accurate and Apple’s returns for ill-fitting bands ordered with one of the new Apple Watches are a hassle.

Customers who chose a Solo Loop or a Braided Solo Loop along with an Apple Watch Series 6 or SE and have a poor fit can’t just return the band for a new size — the entire Apple Watch has to be returned since it’s considered a set.

Unfortunately, there are limited supplies of the new Apple Watch Series 6 models and the new bands, so customers forced to make a return are now having to wait from late October to late November for a new Apple Watch, depending on the model chosen.

There are complaints about Apple’s return policy for the Apple Watch bands on Twitter and on a long discussion of the Solo Loop and Braided Solo Loop bands on the MacRumors forums. Apple Watch models that are not fitting properly must be returned in full, and Apple’s online support staff has been offering no alternative.

Some MacRumors readers appear to have had luck getting a different-sized band without exchanging the entire watch in an Apple retail store, but it’s not clear if that’s going to be an option for all users, especially as most Apple Stores seem to have limited band stock. From the MacRumors forums:

I assumed if you ordered the incorrect size, you could keep the watch and just return/exchange the band. But Apple support through chat said you have to return the watch and the band. That’s so wasteful. And frustrating. I’m selling my S4 watch and the buyer will have to keep waiting until it’s all sorted out.

For those who haven’t ordered yet, it’s worth reading through the Solo Loop discussion on the MacRumors forums because it’s filled with anecdotal fit tips from people who have already been able to try a Solo Loop or Braided Solo Loop. Several people have found Apple’s printable measurement tool to be inaccurate, as some have even found measurement comparisons incorrect.

My choices are deal with the wrong sized band, or return the entire thing (watch and band) then re-order one size down which will not arrive until late November. I wish I could figure out why the Apple product experience once you get anywhere near support is a complete nightmare.

There seems to be a preference for a slightly snugger Braided Solo Loop due to stretch, while people have had less trouble with the Solo Loop, but it varies by person. A snug fit is also required for the Blood Oxygen monitoring feature to work properly. The best way to get a good fitting watch is to visit an Apple Store, but of course, that is difficult in some places where ‌Apple Stores‌ haven’t reopened, and in others where the pandemic is continues to be a concern.

I’m exactly between a 7 and 8, holding the sizing thing tighter than I’d ever normally wear a watch. The 8 is so loose that the dumb O2 test won’t even work. pic.twitter.com/kpcQTYitpD

At the current time, there seems to be no clear option for people who have an ill-fitting band beyond waiting, but hopefully Apple Watch stock will improve and shipment estimates won’t be quite as long as Apple’s current November estimates.Related Roundup: Apple Watch 6Buyer’s Guide: Apple Watch (Buy Now)
This article, “PSA: New Apple Watch Owners Have to Return Entire Device for Ill-Fitting Solo Loop or Braided Solo Loop” first appeared on MacRumors.com