Home News OPPO ColorOS 11 (Android 11): All the new features you need to...
News

OPPO ColorOS 11 (Android 11): All the new features you need to know about 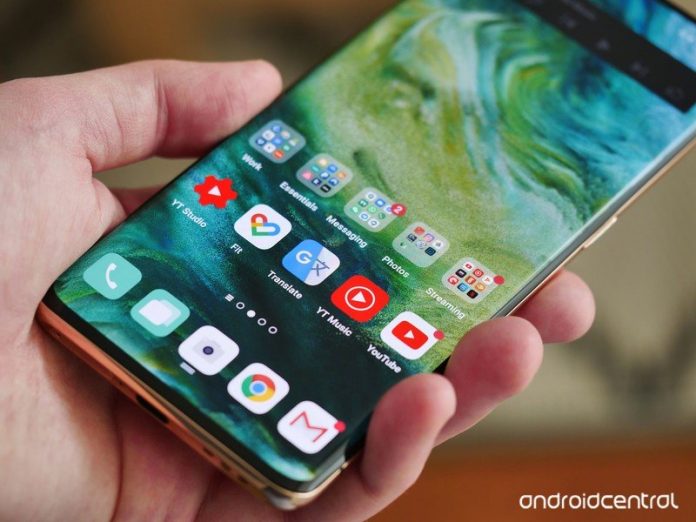 ColorOS 11 introduces a laundry list of changes as OPPO sets its sights on global markets. 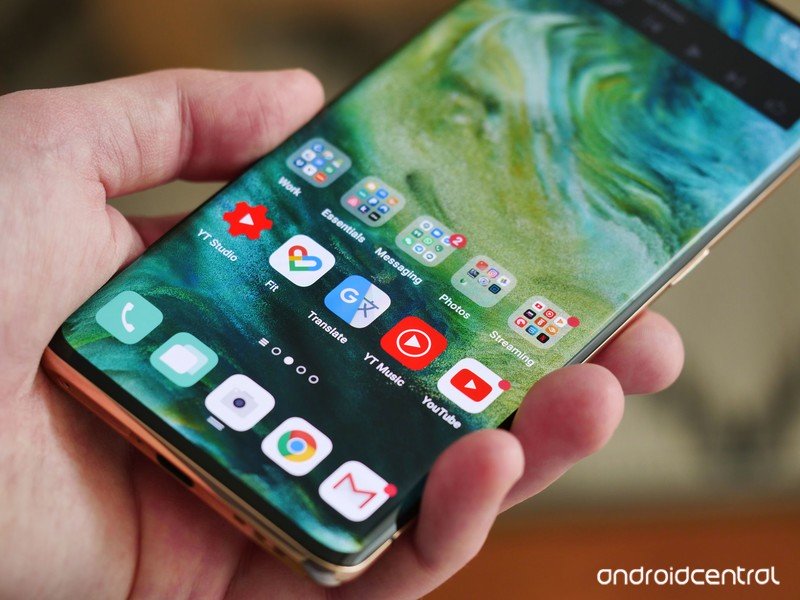 OPPO is one of the largest phone manufacturers in the world, and over the last two years it has turned its attention to European markets, where it is seeing a heady growth. In Q2 2020, OPPO’s shipments in Europe increased by 41% from the same time a year ago, and the company saw a 10% uptick in global sales — all in the middle of a pandemic.

OPPO’s flagships tend to hold their own against the best Android phones, and its focus on global markets has allowed the brand to flourish. With OPPO now becoming a major player outside of China, it is making key changes to its ColorOS user interface to make the skin more palatable to a global audience. ColorOS 7.0 debuted on the Find X2 Pro earlier this year with a modern user interface and plenty of visual tweaks, and OPPO is now debuting ColorOS 11 based on Android 11.

OPPO says it’s going straight to ColorOS 11 to maintain parity with Google, making it easier for its customers to understand the underlying Android version. ColorOS 11 comes with a ton of new features, with OPPO working closely with Google to integrate all the additions in Android 11 while maintaining its own visual aesthetic.

OPPO is also touting exclusive features like a three-finger gesture for instantly translating on-screen text via Google Translate, customizable dark mode, new battery saver mode, and a host of new customization options. ColorOS is one of the most popular skins around — with over 370 million users around the world — and with ColorOS 11, OPPO is building on that foundation with meaningful additions across the board. Let’s take a look at all the new features in ColorOS 11, and when the update will be available on your phone.

The Find X2 Pro continues to be one of the best phones money can buy today. With a sublime 120Hz QHD+ AMOLED panel backed by the latest hardware, 5G connectivity, all-day battery life with 65W charging, the phone ticks all the boxes. ColorOS 11 brings a host of new software features and Android 11 to the device, making it that much more enticing.

ColorOS 11 gets all the new features in Android 11 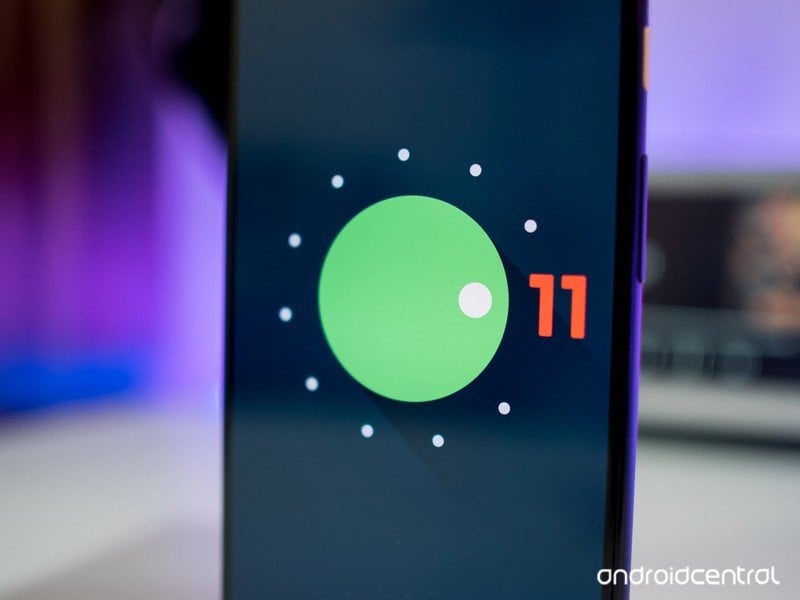 Google introduced a lot of features in Android 11, and they’re all intact on ColorOS 11. You get a dedicated Conversations view at the top of the notifications window, chat bubbles, and the new power menu that works as a dashboard for smart home control.

The privacy and security features are present as well. You get one-time permissions for the camera, microphone, and location, scoped storage to restrict apps from accessing the entire file system, and auto-reset permissions for apps you haven’t used in a while.

OPPO also added new privacy-focused features like Private System. The feature essentially creates a second user account on your phone, housing its own version of apps and data. You’ll need to use a different PIN and fingerprint to log into Private System, and the feature is a great way to delineate your work and personal profiles. The feature itself will be available starting November.

OPPO also added a lot of optimizations to ColorOS 11. Memory utilization is boosted by 45% and you’ll see a 32% increase in response rate, with these optimizations aimed at ensuring the UI scales well for high refresh rate displays. 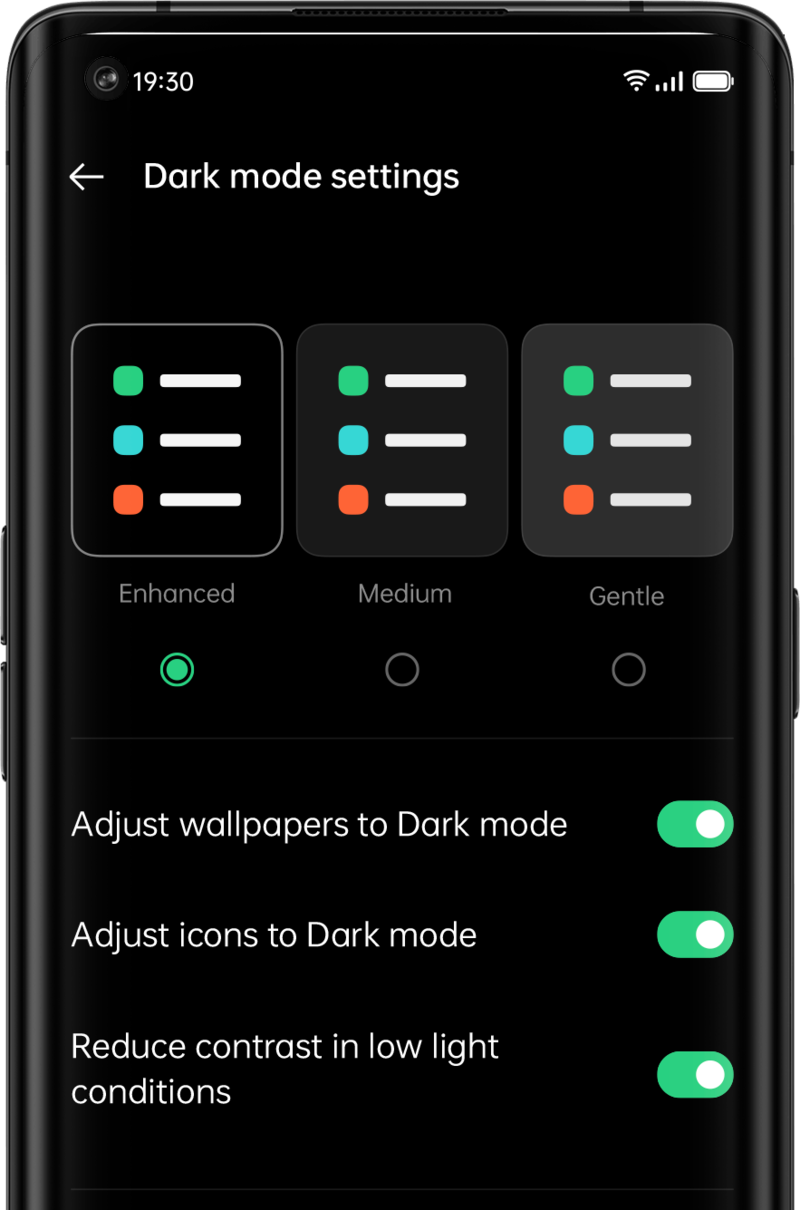 Dark mode has been a mainstay on Android for over a year, and OPPO is now adding customization options to the feature. With ColorOS 11, you’ll be able to choose from three distinct color profiles for dark mode: Enhanced, Medium, and Gentle. Enhanced is the default blacked-out option, Medium has lighter tones, and Gentle switches to a grey color scheme.

The UI will automatically adjust the backgrounds and icons based on the option you choose, and if you’re not a fan of the default dark mode option on most phones, ColorOS 11 gives you added customizability. You also get the ability to schedule dark mode from sunset to sunrise or set up a custom schedule.

ColorOS 11 lets you make your own backgrounds, ringtones, and AOD styles 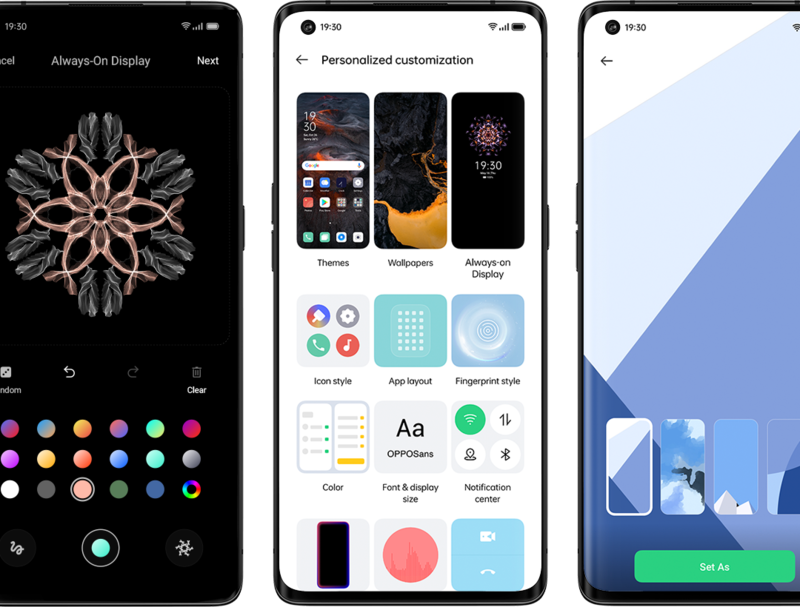 Building on the theme of customization, ColorOS 11 adds powerful tools that let you create your own wallpapers, themes, ringtones, icon styles, and even Always-On Display patterns. The ability to create your own ringtone is intriguing, as is the option to create distinct patterns for AOD.

To create unique backgrounds, all you need to do is upload a photo and a dedicated algorithm analyzes the colors and comes up with distinct backgrounds. ColorOS 11 also lets you customize the accent colors — similar to OxygenOS — and the feature goes a long way in switching up the look of the interface.

ColorOS 11 has a nifty gesture for instant translations 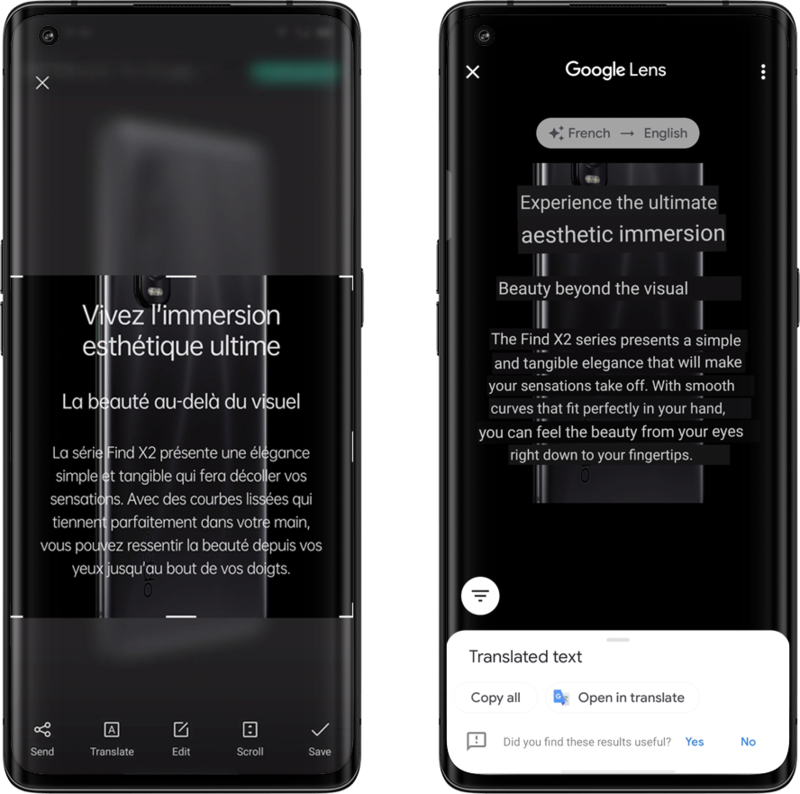 With ColorOS 11, you’ll be able to get an instant translation of on-screen content via a three-finger gesture. Doing so will take a screenshot, pull up Google Translate, and translate the text. OPPO says it co-created this particular feature with Google, and it is a nifty way to get a translation without having to head into Translate. Google Translate is also integrated into the smart sidebar, making it easier to access.

ColorOS 11 has a built-in battery saver mode that does a great job extending the battery life, and it’s also getting a secondary Super Power Saving Mode that takes things to a new level. The mode lets you pick six apps to run in low-battery scenarios, and it switches everything off in the background to eke out more battery.

So even if your phone’s battery level is low, turning on Super Power Saving Mode will let you get more usage. OPPO says WhatsApp usage can be extended by up to 90 minutes even with the battery down to 5% with the mode enabled.

OPPO is also debuting a Battery Guard feature that prolongs battery life of your phone. When you plug in your phone at night, the battery is charged to 80% and then the rest of the 20% is charged just before you wake up, ensuring the phone isn’t plugged in even after it’s fully charged.

Sound familiar? That’s the same tech OnePlus introduced earlier this year on the OnePlus 8 series, with that particular feature called optimized charging. The feature is baked into OxygenOS, and it is great to see ColorOS picking up the same feature. 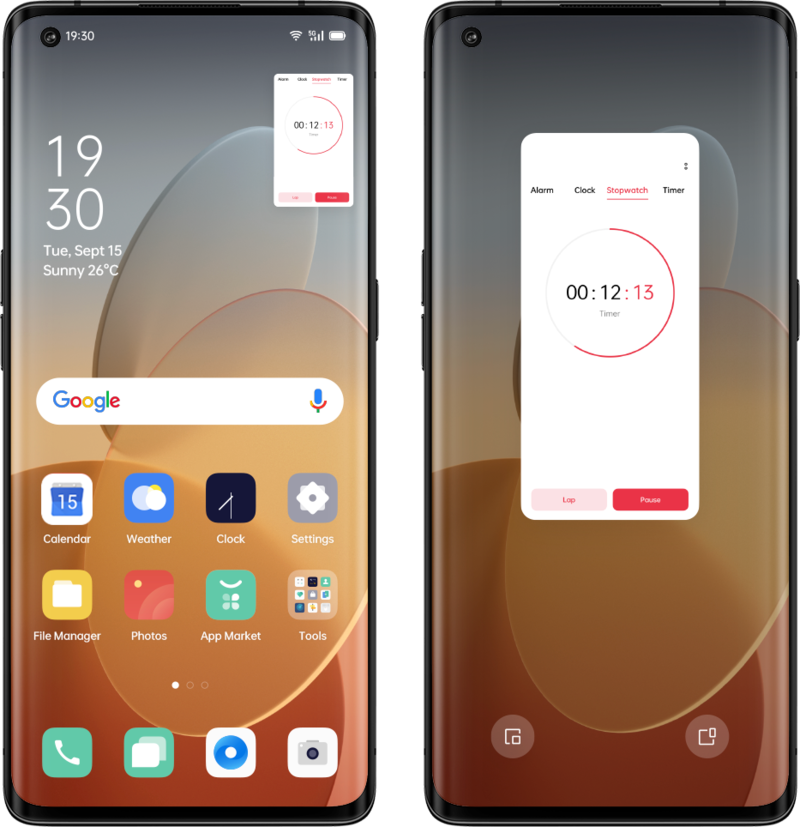 Floating windows are great for multitasking, and ColorOS 11 is picking up the feature. OPPO calls it FlexDrop, and you get the option to resize an app to fit anywhere on the screen. The app will then be overlaid on whatever app you launch next. Samsung also offers the same feature in One UI 2.0 and Xiaomi in MIUI 12. 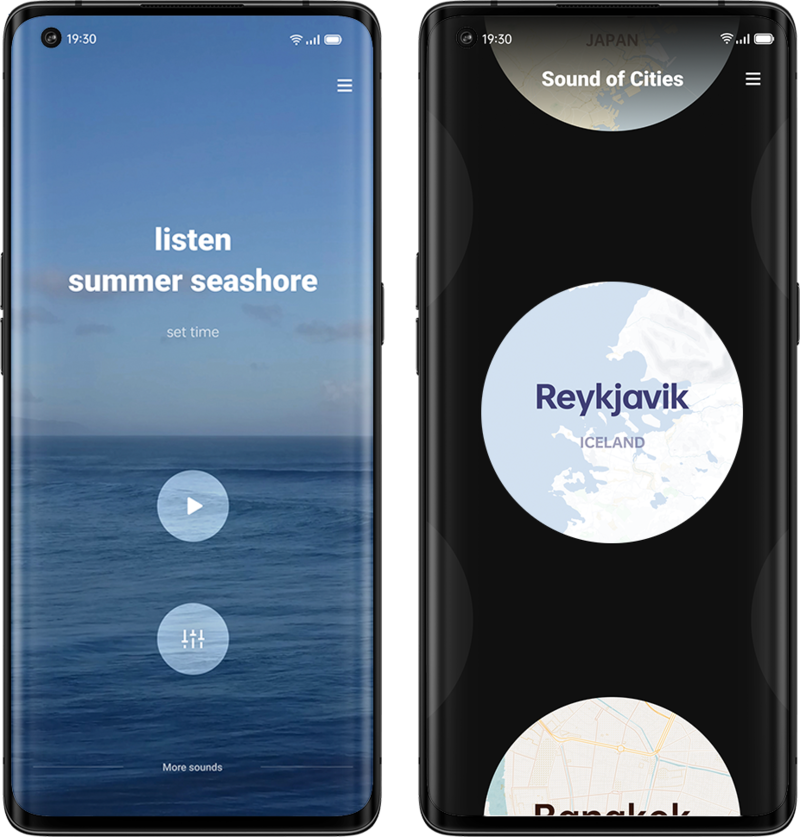 OPPO Relax lets you unwind to white noise, and in ColorOS 11 it is picking up city sounds. OPPO teamed up with Music City to add sounds of Tokyo, Bangkok, and Reykjavik into the app, and you get to pick various soundscapes. Relax 2.0 also lets you create custom white noise profiles, with the ability to choose the duration and customize the sound to your liking.

The ColorOS 11 public beta has kicked off for the Find X2 series, and the Reno 3 series will be added before the end of the month. Like other manufacturers, OPPO is making the Android 11 update available to its latest devices first. Even though ColorOS 11 is technically a beta, the build itself is based on the stable Android 11 release.

One point to note here is that the beta releases will not be available in European markets, with OPPO limiting the initiative to India, Indonesia, Thailand, and Malaysia in addition to China. OPPO says it’s not able to offer the builds in Europe because of GDPR guidelines, but the stable build should be making its way to these markets once it’s available.

These OPPO phones are getting the ColorOS 11 update

OPPO will deliver the ColorOS 11 update to 28 phones in its portfolio, with the public beta now available for the Find X2 series. The Reno 3 series is next in line to get the update, followed by the Reno 4 and the F11 series. Here’s the full breakdown of when your OPPO phone will get the ColorOS 11 beta:

The timelines listed above are for the ColorOS 11 beta, and the stable release should roll out a few weeks after the first beta build. As is the case with the beta rollout, these timelines aren’t valid for European markets, and eligible devices in these countries will directly get the stable build as soon as it is available.

OPPO is committing to delivering the stable ColorOS 11 build to the first batch of devices before the end of 2020. With the public beta kicking off for the Find X2 and scheduled to start for the Reno 3 series by the end of the month, we should see these phones getting the stable update by the end of October or sometime in November.

OPPO is being proactive with platform updates, and it’s great to see the Chinese manufacturer committing to rolling out updates on time. I’ll update the post once we have a clearer picture of the stable release, but if you’re using a device in the Find X2 series, you can get started with the beta right now.

The main draw for the Find X2 Pro is obviously the hardware, but the software is an area where OPPO is looking to make a lot of gains. ColorOS 11 brings a lot of meaningful changes, including better customization options, all the new features in Android 11, and mindful utilities that differentiate the UI.

There are some great mesh systems to choose from. Which is the right one for you?Most people don't put enough
Read more

Chatting is better with bubbles.Google's goal with Android 11 was to improve upon a few key aspects of the OS
Read more

At the height of the Cold War in 1959, the Soviet Union was dominating the space race which is why
Read more

Google is being aggressive with Pixel 4a pricing in India.What you need to knowThe Pixel 4a is going on sale
Read more