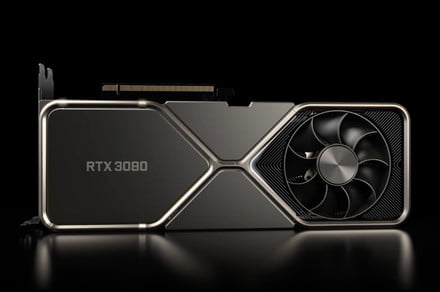 Following the disastrous PlayStation 5 pre-order debacle, it was Nvidia’s turn to disappoint gamers around the world.

Across multiple sites, nearly every model of the new GeForce RTX 3080 is out of stock. And those looking to buy are not happy. In fact, pre-orders went so quickly, some online are wondering if they even happened at all?

Many would-be customers reported that Nvidia’s own site never changed from the “notify me” button to “buy now.” It was only after clicking through to purchase a 20 series card that it showed the 3080 among them, with an “out of stock” label attached to it. Nvidia’s “notify me” system was itself slow on the draw, as emails with links for the graphics card arrived nearly an hour after orders went live for people who had signed up.

As the dust settles after a whirlwind first hour of trying to get pre-orders, the picture isn’t that much clearer. GPU manufacturer EVGA announced that, despite its site only sporadically working, it is completely out of stock and the web traffic for the 3080 was the most in its history.

Sold out now, sorry everyone, I know the site was slow/lagging we are working to improve it, this is the most traffic we have ever seen on EVGA

When Digital Trends reached out to Nvidia for a statement, here is what they had to say. “This morning we saw unprecedented demand for the GeForce RTX 3080 at global retailers, including the Nvidia online store. At 6 a.m. pacific we attempted to push the Nvidia store live. Despite preparation, the Nvidia store was inundated with traffic and encountered an error. We were able to resolve the issues and sales began registering normally. To stop bots and scalpers on the Nvidia store, we’re doing everything humanly possible, including manually reviewing orders, to get these cards in the hands of legitimate customers. Over 50 major global retailers had inventory at 6 a.m. pacific. Our Nvidia team and partners are shipping more RTX 3080 cards every day to retailers. We apologize to our customers for this morning’s experience.”

For those looking for an RTX 3080, here is a handy tracker that keeps stock of inventory of a large swath of stores where it would be available. As of this writing, they all read out of stock, except for eBay, where scalpers are already selling 3080 pre-orders for multiple times the retail value. One listing topped out at $50,000 after a furious bidding war.

Some are holding out hope that the pricier and more powerful 3090 cards, which will retail for $1,499, will be more available due to their hefty cost. But Nvidia has already said that that GPU will be the one with the smallest inventory, so those dreams might already be dashed.

While the new consoles and state-of-the-art graphics cards hold the promise of next-generation gaming, it seems like for most, that future is out of reach as retailers struggle to maintain inventory.

It’s Xbox’s turn next week with pre-orders for the Series X and Series S happening on September 22. If the last 24 hours have taught as anything, it’s that if you want one of those, you’ll more than likely have to have your finger hovering over the refresh button.

Facebook
Twitter
Pinterest
WhatsApp
Previous articleTime is running out to grab a Dell XPS 13 for only $750
Next articleFortnite season 4 week 4 challenge: How to hack Stark Robots at Stark Industries