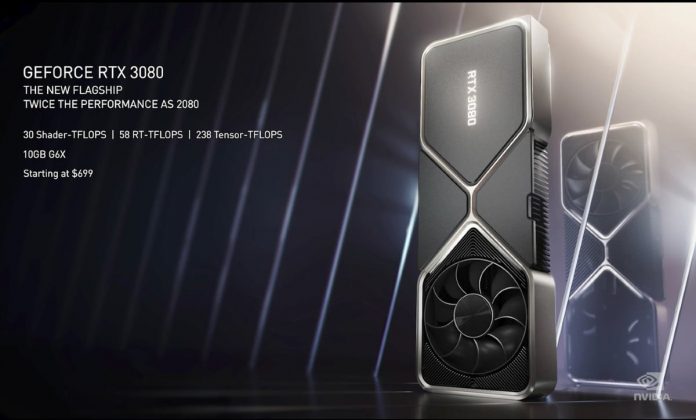 The announcements came from Nvidia’s livestreamed GeForce event, led by founder and CEO Jensen Huang, who characterized the move to RTX 3000 as the biggest generational leap in Nvidia’s history.

Jensen said the flagship RTX 3080 offers “twice the performance of the 2080,” and includes 10GB of GDDR6X memory running at 19Gbps. The result is consistent 60 FPS (frames per second) at 4K with RTX turned on. Of course, that will vary greatly between games. The RTX 3080’s new design includes reengineered thermal solution, providing two times better cooling, according to Nvidia. The RTX 3080 Founders Edition will cost $699, the same starting price as the RTX 2080, and will be available on September 17.

Meanwhile, the RTX 3090 is what Nvidia calls a “BFGPU,” a massive $1,499 graphics card with 24GB of GDDR6X memory at 19.5Gbps. Jensen proudly boasted that the RTX 3090 can play games at 8K in 60 FPS. This isn’t rendered natively, of course, but instead uses Nvidia’s supersampling A.I. technology, known as DLSS 2.0.

The RTX 3090 will also support HDMI 2.1, which can provide variable refresh rate to the new crop of OLED TVs that also support the powerful port standard.

This is a follow-up to the Titan RTX, a limited-release card that was primarily made for workstations and data scientists. We’ve already seen some manufacturers, such as Acer, announce gaming desktops with the RTX 3090.

The RTX 3090 was rumored to require new 12-pin power connector, but that doesn’t seem to be the case. The rumor hasn’t yet been confirmed by Nvidia.

These new graphics cards mark the debut of Nvidia’s new Ampere microarchitecture, which is said to provide a 50% uplift in GPU performance while consuming half the power. All of these cards use second-generation RT cores, third-generation Tensor cores, and 28 billion transistors. Ampere is based on Samsung’s 8nm process.

Nvidia didn’t specify a shipping date for the RTX 3090 or RTX 3070, but said they would be available sometime in October.

The RTX 3000 series is a follow-up to the 2000-series GPUs, which first launched in 2018 with support for real-time ray tracing. In 2019, Nvidia has also pushed out an iterative update with the RTX Super series for both mobile and desktop form factors.