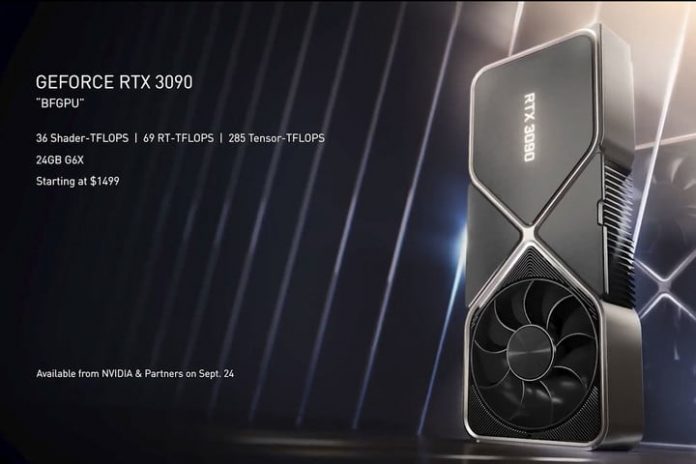 Nvidia’s next-generation graphics cards have finally been officially unveiled, and if Nvidia’s own claims are anything to go by, they set new standards for power and performance. At the very top of the pile stands the new RTX 3090, a monstrous card that may be more Titan-like than Ti, but as the most powerful graphics card Nvidia has ever made, comparisons to the last-generation kingpin are worth making.

When it comes to the best of the best, the 3090 and 2080 Ti are two (non) titans of the graphics card game, but how different are they, really? Is the 2080 Ti still worth buying if you can find it at a good price?

The RTX 2080 Ti originally released on September 28, 2018, priced at $1,199 for the Nvidia Founders Edition. The “Standard Edition,” which acted as a base for third-party cards, had a base price of $999, though Nvidia’s board partners typically added more capable cooling, greater clock speeds, and other features that raised the price to as much as $1,900 in extreme cases.

The RTX 3090 was unveiled on September 1, 2020, but isn’t on sale just yet. It will hit store shelves on September 24,  with a price tag of $1,499. This is substantially more expensive than the original cost of the 2080 Ti, making it even more of a niche card. Still, it’s far more capable than the Titan RTX, which debuted at $2,500 just a couple of years ago, so if you want the best of the best, it might be a cost worth paying when it goes on sale.

Nvidia released some stark performance numbers for its RTX 3090 during its September press event, giving us our first real idea of what the new-generation card can do. Although we’ll need to wait for third-party reviews to know for sure how capable the new card is compared to the RTX 2080 Ti, Nvidia’s own first-party numbers and raw specifications for the two cards give us some idea of what to expect.

It also has more than double the amount of memory, at 24GB of next-generation GDDR6X, which should lead to a substantial increase in memory bandwidth. We don’t know the speed of the memory yet, nor the overall bandwidth, but with a new generation of memory, much higher capacity, and a wider bus, it should be substantial.

Where the 2080 Ti was designed as a 4K graphics card, the 3090 has the power and performance to handle up to 8K resolution gaming at 60 FPS with ray tracing enabled. That’s a staggering uplift in performance, even if it does demand the use of Nvidia’s DLSS technology to ease the load on the monstrous GPU.

It’s quite possible that we’ll see the RTX 3090 be capable of outputting 100 FPS in AAA games at 4K, too, though we’ll need to wait to see what reviewers can make of it when it launches at the end of September.

The 2080 Ti launched with what was, at the time, a revolutionary cooling design for Nvidia’s Founders Editions, debuting with a dual-fan configuration for the first time. Third-party alternatives were typically varied, with dual and triple fan variants, as well as some watercooling and hybrid cooling solutions.

Like most cards of its generation, the 2080 Ti leveraged dual eight-pin power connectors to handle its base 260W TDP. Heavily overclocked 2080 Tis could pull over 500W over three 8-pin connectors, though those were a rarity, even for such a high-end card.

The RTX 3090 uses Nvidia’s new push-pull vapor chamber design that it pioneered with the RTX 3080 — it’s just much larger. The fins are bigger, the fans have longer blades, and the overall card itself is bigger, too. Nvidia promises that this new cooler design will help the card perform better at lower noise levels than previous-generation Titan GPUs, despite the higher power demands.

Whether Nvidia will allow third parties to offer their own bespoke versions of this card remains to be seen, but aftermarket watercooling seems a likely possibility for those who want even lower temperatures and noise levels.

The RTX 3090 will demand as much as 350W at stock speeds, though it doesn’t utilize any kind of new power configuration, as was long rumored. It will instead utilize a typical dual 8-pin PCIe power connector design.

As with the launch of the RTX 2000 series graphics cards, Nvidia spent much of its press event for the new RTX 3000 series talking about ray tracing performance. Second-generation RT cores were said to offer up to 1.7 times the performance of Turing’s, allowing the new-generation RTX 3080 to handle 4K at 60 FPS with ray tracing enabled. The 3090 will be able to go one better, offering ray tracing at 8K when leveraging DLSS technology, too.

The RTX 2080 Ti wasn’t capable of playing games at 4K with ray tracing enabled without frame rates being extremely poor, even with DLSS enabled. The 3090 looks to have fixed that problem.

Part of that advancement will be down to the general performance improvement of the 3090’s GPU core, so until we have third-party testing to confirm all aspects of the new card’s performance, we can’t say for sure just how capable its ray tracing ability will be. It is, however, much more capable than the 2080 Ti, making it the far better card for those wanting to play games at ultrahigh resolutions with ray tracing enabled.

For a full list of games that support ray tracing, check out our guide.

The second generation of DLSS is a major component in Nvidia’s ray tracing and 4K gaming program, making the 3090 far more capable than it would be otherwise. It’s come a long way since the first generation, and though it’s not perfect, it should help give Nvidia the performance advantage at the top of the market when competing with AMD’s incoming Big Navi and RDNA 2 alternatives.

The RTX 3090 employs faster, second-generation tensor cores, too, allowing it to handle even more detailed sharpening and denoising tasks in real time, making for more detailed games, with less of a performance hit than we saw with the 2080 Ti.

The king is dead, long live the king

With the 3080 and 3070 offering performance in excess of what the 2080 Ti could do, the best of the last generation’s best isn’t that special anymore. The 3090, on the other, certainly is. We don’t have hard performance numbers for everything it can do just yet, but it’s likely to be something quite special indeed.

The raw power it offers is likely to be in excess of anything that AMD or Nvidia itself offer for quite some time, and though the price tag is high, it’s still much lower than what Titan GPUs typically debut at, making this an affordable top-tier card, even if it’s way outside most gamers’ budgets.