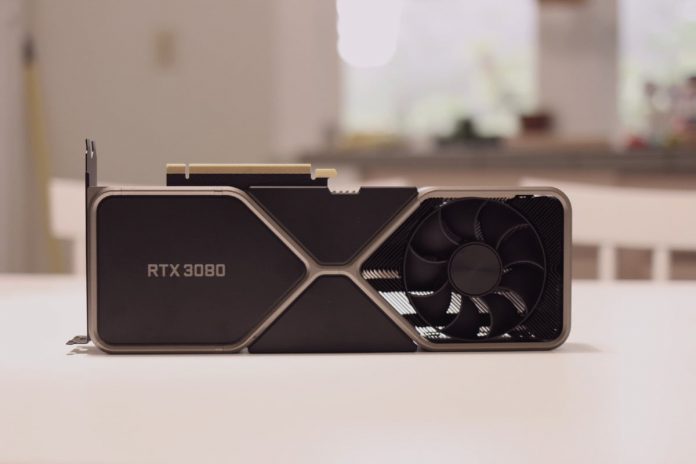 On the morning of September 17, 2020, I woke up at 8:30 a.m., a full half-hour before pre-orders for Nvidia’s GeForce RTX 3080 card were due to go up. The night before, I had managed by the grace of the gods to actually pre-order a PlayStation 5. Now my mind was focused on going two-for-two with the new GPU. Certainly, a graphics processing unit would be relatively easy to nab compared to one of the most anticipated games console of all time.

I ventured to ResetEra, the internet’s go-to forum for everything gaming. Like had been done with the PS5, there was a new thread for those looking to order the RTX 3080, and the opening post included links to the landing pages for it at major retailers

I opened them all.

The clock struck 9 a.m. ET, and it was time to go to work. Despite being advised to not go for a founders edition directly from Nvidia, as third-party models tend to up the clock speed of the card, I felt more secure ordering from Nvidia. Plus, their card had a nifty new cooling system that I was not sure would be included in the non-founders edition. So, my original plan was to secure one directly from the source.

Nvidia was the first to let me down.

Their landing page for the 3080 was stuck on a “notify me” button that I had clicked days before to be notified when the 3080 would be on sale. 9:01 a.m. Only a minute had passed, but with the recent stress of securing a PS5 firmly in my mind, I know that a minute is an eternity when it comes to things like this.

No one displayed any stock. “Has the 3080 even gone on sale? Did someone forget flip the switch?” I checked the ResetEra thread. That sentiment, that 3080s simply hadn’t gone on sale yet , was a shared one. Then posts trickled in. Less than a smattering of commenters had somehow managed to secure one. Turns out that the trick with Nvidia was to attempt to purchase a 2080, which would take you to a store page where a 3080 was purchasable for mere seconds before reading “out of stock.” The actual 3080 landing page still read “notify me.”

People couldn’t believe it. Commenters were dropping videos of themselves, at 9 a.m. on the dot, refreshing the store they accessed while trying to purchase a 2080, and the “notify me” tab switching to “out of stock” with no “buy now” option appearing in between.

A conspiracy formed. Some people were certain that this was all a ploy to push you to buy Nvidia’s GeForce RTX 3090, which is releasing later this year with increased performance and an increased price of $1,499, compared to the 3080’s $699.

It was at this point that whispers of a 3080 Discord began to arise, a chat room that might have been a little quicker on the draw with updates. “Does anyone have a link?” an innocent ResetEra member asked. “Here!” replied another, dropping a portal to the Discord for everyone to see.

That was the start of the chaos.

On ResetEra, you create hidden links in order to prevent everyone and their mother from descending upon it. No such masking was afforded to this post. “DELETE THIS!” multiple commenters posted. But it was too late. I, along with hundreds of other, joined the secret Discord in a blink.

The small collective of members that had been there long before sales went up were taken by surprise. Their Discord was not built for this, with no two-factor authentication to verify a real user, no rules page, no posting restrictions, and most importantly, no slo-mo enabled to prevent the chat from being a blazing scroll of text that was impossible to navigate.

What was meant to be a useful resource for the most dedicated PC gamers looking to score a GPU had become a useless mess of screaming and spam. Within seconds, the Discord was restricted and everyone that had joined was purged, whether they were friend or foe.

Blasted back to ResetEra, one of the Discord owners offered to admit people as long as they private messaged her, but soon after she dropped a hidden link in the thread, citing that she had received dozens of private messages in a handful of seconds.

Returning to the Discord, things were a little less hectic, with original members being more welcoming now that the majority of people joining were genuinely interested in purchasing a card rather than trolls. That didn’t stop a few from coming in though, posting links to the previous 20 series cards. At first glance, these listings are near identical to the 30 series, and while people would be very quick to scream in the chat, “IT’S A 2080, DON’T BUY IT,” many were too eager, and ended up purchasing the wrong GPU.

Fortunately, the majority of these purchases had a quick cancellation process — but it added an unwelcome element of chaos into the mix, and posting a link to a card that was anything other than a 3080 without specifying as such quickly resulted in an instant ban.

As the trolls were kicked out, crashing waves of comments slowed to still waters. At this point, news was starting to come in that Nvidia was wiped out of stock, as were the storefronts of the third-party manufacturers. It turned out that B&H never had any stock to begin with.

All eyes then turned on Amazon, with the majority of members believing that the card had never been available there. Rumor had it that stock would be refreshed at the top of the hour. Scripts were crafted by the more tech-savvy members, and paired with a browser plug-in, so many users had an Amazon window that refreshed every five seconds with a complete list of what was and wasn’t in stock.

But the mythical restock never came. The goal posts changed and the hope was that the next hour would bring a restock. The rumor shifted to a hope that when the clock switched to midnight on the East Coast, Amazon would have bountiful listings. Midnight ET came, and no such luck. “Then it would have be Pacific, right?!” some said. Midnight Pacific came and went. The cards remained out of stock.

“Then it would have be Pacific, right?!” some hoped. Midnight Pacific came and went. No updates to be found.

This kind of reaction would happen every hour.

As people woke up on September 18, rejoining those who kept a vigil for 24 hours, RTX 3080 stock was still a barren wasteland. Those still active in the Discord decided to keep the dream alive, slowly trickling in and asking: “Any changes?” A lucky few that managed to order cards the day prior were sharing that their GPU was being delivered soon, showing screenshots of their UPS truck’s delivery route, and finally pictures of it arriving through their window.

Instead of being met with jealousy and scorn, the community shared congratulations with the chosen few that would be playing games at 4K120 without breaking a sweat.

Then, something miraculous happened.

The end was in sight

An Amazon posting, for a third-party card directly from the supplier appeared. It wasn’t one of the more popular brands like EVGA or MSI, but Zotac, which was derided by some in the chat for being unreliable. But for many, it didn’t matter. They just wanted this to be over. Soon the chat was filled with proclamations of “I GOT ONE!” This was followed by reviews for the card, which showed that any negative preconceptions of Zotac were seemingly unjustified.

People got a card! It might not have been the one they wanted, but it was something.

People were wondering if the card would fit in their setup, or if their order would be cancelled, but many of them were content, resigning to answer any of those questions later. For now, it was done.

The Discord chat still chugs along, with those who snagged Zotac pre-orders letting worries of cancellation and compatibility creep into their minds. Many are now also returning as the West Coast begins to wake up, having missed out on the brief window to pick one up.

For many, the saga of purchasing a RTX 3080 has just begun.

Facebook
Twitter
Pinterest
WhatsApp
Previous articleWhat are the advantages of going with an alternative carrier?
Next articleiPad Air 4 vs. iPad (2020): Do you need to spend more?