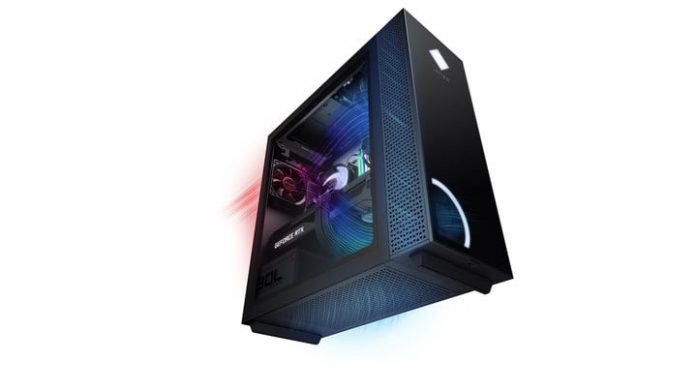 HP announced that it is overhauling its Omen gaming ecosystem, complete with a refresh of its Omen 30L desktop. New for this year is support for Nvidia’s second generation of raytracing graphics cards, and the Omen 30L can be configured with up to a powerful Nvidia GeForce RTX 3090 GPU. Nvidia boasts that its latest lineup of GeForce RT 3000 series graphics features up to 1.9 times the performance-per-watt over the prior generation, so the new Omen 30L will be an incredibly strong gaming system for enthusiasts who want to game at higher resolutions without sacrificing frame rates.

With the Nvidia RTX 3090 under the hood, the Omen 30L will benefit from the GPU’s 24GB of GDDR6X video RAM, PCIe Gen 4 support, and DLSS. According to HP, the company won’t use the standard RTX 3090 card design, instead opting for a custom HP triple axial fan design in a more compact 2.5-slot form compared to Nvidia’s triple-slot format. In a media briefing ahead of the Omen 30L’s unveiling, HP executives claimed that this custom design will feature better cooling. HP claims that performance is up to 1.5 times faster than the Turing-based Titan RTX.

If you don’t need the full power of the RTX 3090, you can step down to configurations featuring the GeForce RTX 3080 or the RTX 3070. When Nvidia unveiled these graphics cards, CEO Jensen Huang claimed that the RTX 3080 features twice the performance of the RTX 2080, while the RTX 3070 is more powerful than the prior generation RTX 2080 Ti flagship GPU. Configurations of the Omen 30L with RTX 3080 will also feature HP’s custom card design, allowing it to play 4K games at 60 fps.

Pricing and exact configurations for the desktop were not immediately available, though HP stated that the Omen 30L will be available by holiday.

The Vector Wireless mouse is, according to HP, the world’s fastest USB-C charging gaming mouse, achieving one hour of battery life with a 30-second charge.

Two monitors round out the gaming-centric range of gaming accessories. HP announced two 24-inch gaming monitors that will be available starting in October. The HP X24i will be priced at $229, while the HP X24ih will cost $249 when they launch. These entry-level gaming monitors come with IPS panels for wide viewing angles and 144Hz refresh rates. Thanks to AMD FreeSync Premium support, these monitors also have a 1ms response time.

Facebook
Twitter
Pinterest
WhatsApp
Previous articleThis Acer Chromebook is in stock and on sale for only $380
Next articleOculus Quest 2 64GB vs. Oculus Quest 2 256GB: Which should you buy?