Home How to How to watch the first Biden vs. Trump presidential debate
How to

How to watch the first Biden vs. Trump presidential debate 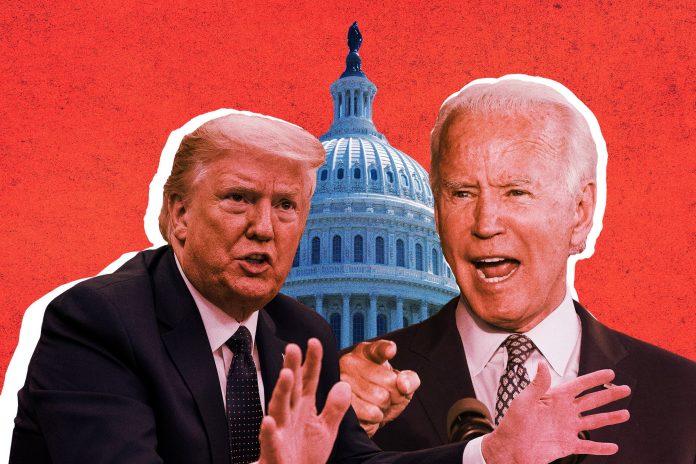 The first presidential debate of the 2020 election takes place on Tuesday, September 29.

President Donald Trump and former Vice President Joe Biden will meet on the debate stage for the first time as they bid to win over American voters ahead of Election Day. This debate will be the first of three in the 2020 election cycle.

Biden and Trump are the oldest presidential candidates to ever face off in a televised debate, at 77 and 74, respectively.

Here’s everything you need to know about the first presidential debate, including how to watch it live.

When is the presidential debate?

How to watch the presidential debate online

The debate will be available to watch on all major networks and their websites, such as ABC, CBS, Fox News, NBC, CNN, and MSNBC. The debate will also stream live on C-SPAN’s YouTube page.

We will embed a stream at the top of this page once it goes live.

Who is moderating the debate?

There were multiple debate moderators in previous years, but due to the coronavirus pandemic, debate organizers are opting for one moderator per debate.

Where is the debate?

The debate will take place at Case Western Reserve University in Cleveland. While the candidates and moderator will appear in person, there will not be an audience like in past years because of the pandemic.

What topics will be discussed at the debate?

Debate topics were chosen by Wallace and include the Supreme Court (and most likely Ruth Bader Ginsburg’s replacement), the coronavirus pandemic, the economy, race and violence in American cities, and the integrity of the election.

When are the next debates?

The second presidential debate takes place starting at 6 p.m. PT on Thursday, Oct. 15. The debate will be held at the Adrienne Arsht Center for the Performing Arts in Miami, and will be moderated by C-SPAN political editor Steve Scully.

The third and final presidential debate will be held at 6 p.m. PT on Thursday, Oct. 22. The debate is scheduled to be held at Belmont University in Nashville, Tennessee, and will be moderated by NBC News White House correspondent and co-anchor of Today Weekend Kristen Welker.

A single vice presidential debate between Republican candidate Mike Pence and Democratic candidate Kamala Harris will be held at 6 p.m. PT on Wednesday, Oct. 10. The debate will take place at the University of Utah in Salt Lake City, and will be moderated by USA Today Washington bureau chief Susan Page.

You don't have to wait until Prime Day to score some savings with a cheap 4K TV deal. Today only,
Read more

Aside from a new finish, the "Special Edition" will likely not be any different from the OnePlus Nord variants already
Read more

In the off chance that you didn’t know it, Amazon is holding its Prime Day festivities, giving consumers a chance to save big on products. But, not to be outdone, our partners at StackCommerce are holding their own promotion.Starting today (October 10) and running through October 14, you can save an extra 20% on things site-wide in the AG Deals Store. All you have to do is enter promo code OCTSALE20 at checkout and you’ll get the added discount.Look around there’s plenty of great things to be had in a wide variety of categories. We’re talking products, software, services, training, and more.Take for instance this HD Mono Telescope.This portable, lightweight monocular telescope delivers 50×60 magnification while maintaining picture-perfect image quality.With fully coated optics and BAK4 prisms glass, your view won’t be compromised. Look at the face of the person about 1,000 meters, the text or number of the viewing building 2,000 to 3,000 meters.With a swing-up eyepiece, this monocular is also suitable for people who wear glasses. It’s good for sporting events, concerts, bird watching, camping, fishing, and traveling.Right now, the HD Mono Telescope is available for 14 percent off its regular price, only $46.99 from the AG Deals store. Toss that coupon code on (OCTSALE20) and you’ll get it down to $37.59.Best SellersEarn Credits!For every $25 you spend in the AG Deals Store you get $1 credit added to your account. And, if you refer the deal via social media or an email that results in a purchase, you’ll earn $10 credit in your account.First Time Buying?If this is your first time buying, you are also eligible for 10% discount! Just be sure to subscribe for email updates.Free StuffNot looking to spend any money today? No worries. You can still visit the AndroidGuys section for freebies and pick something anyhow.
Read more