Home How to How to get the Snake Shot Akimbo attachments in Call of Duty:...
How to

How to get the Snake Shot Akimbo attachments in Call of Duty: Warzone 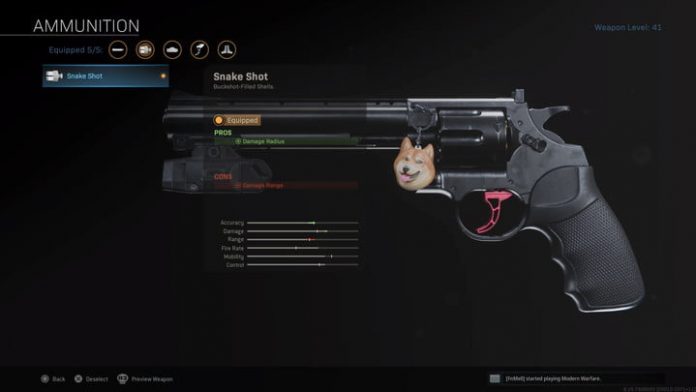 Having an effective secondary weapon in your back pocket while playing Call of Duty: Warzone can be the difference between victory and defeat. There are many you can try, but we’ve been enjoying the Snake Shot Akimbo .357 Magnum handguns lately. The Snake Shot ammo attachment and Akimbo perk make the .357 extremely deadly at close range — effectively turning it into a shotgun. But there’s a lot that goes into using this setup properly. First, you need to unlock the two attachments for the .357, and then you have to know how to use them properly.

How to get the Snake Shot ammunition attachment for the .357

The first step to getting the ultimate .357 setup is to earn the Snake Shot ammunition. To do so, you’ll need to get your .357 up to level 29. You can do this through Warzone or through Modern Warfare multiplayer. It’s much easier to level up your weapons in Modern Warfare multiplayer since you’ll come across enemies more often when compared to the vast, open map found in Warzone.

Though, if you don’t have Modern Warfare and don’t want to spend any money, it will take some time to level up your weapon in Battle Royale. The best strategy is to down an enemy with your main weapon and quickly switch to your .357 to finish off the kill. Other than that, try going for bounties to be as aggressive as possible. Don’t forget about your weapon XP tokens, too. You can pop one of those before a match to level up faster.

The best way to level up your weapon if you only have Warzone is to play Plunder. This mode allows you to spawn in right away with your loadout, and since you respawn after you die, it’s much easier to rack up kills with a specific weapon. The great thing is that you’ve got numerous ways to go about leveling up your weapons — so whether you’ve only got Warzone or have the entire Modern Warfare suite, you’ve got plenty of options.

The harder attachment to unlock is the Akimbo perk, which requires you to get three kills with the .357 in five different matches using the Recon perk. Again, this task can be completed much faster in Modern Warfare multiplayer, but if you don’t have it, there are other ways to complete the challenge. You’ll want to attempt earning this perk in Plunder since you’ll be able to respawn after you die. Typically, the game modes go by much faster than their 30-minute timers, so you should be able to earn this one in a couple of hours. It’s much harder to get three kills with the Recon perk in Battle Royale since you won’t encounter enemies as frequently.

Keep in mind that you unlock perks and attachments in order, meaning you’ll need to earn all of the other perks for the .357 first. Most of them are earned by leveling up the weapon, which you’ll be familiar with if you’ve earned the Snake Shot attachment. In terms of actually getting kills with the Recon perk, use the same method described above. Down an enemy with the weapon of your choice, and switch to the .357 to secure the kill.

Having the right loadout for your Snake Shot Akimbo .357 Magnums will do wonders, so you’ll want to pay attention to the attachments, perks, and equipment you have added to your class. The main thing is that this weapon is only usable at close range. This means you should add attachments to your weapon that will bolster its close-quarters strengths. Obviously, two of the five attachments are already accounted for with Snake Shot and Akimbo, so you’ll have three more to make use of.

Since you won’t be aiming down sights with your Akimbo setup, you’ll want to improve hip-fire accuracy as much as possible. That’s where the 5mW laser comes into play. Additionally, the .357 long barrel increases the weapon’s damage range and bullet velocity and improves recoil control. The downsides are its aim down sights (ADS) speed — which is a non-issue since you’ll only be firing from the hip anyway — and its movement speed. Finally, we recommend the match-grade trigger to increase the fire rate while preserving control.

Here are the attachments for our recommended setup:

As for perks and equipment, it truly depends on your style and which game mode you’ll be playing. For Battle Royale, we don’t advise that you tailor your entire class around the Snake Shot Akimbo .357 Magnums since they’re only effective at close range. Typically, we’d recommend using Cold-Blooded, Ghost, and either Tune Up or Amped, depending on your style. We also advise using C4s and either a heartbeat sensor or stuns as your tactical equipment.

How to use the Snake Shot Akimbo .357

The main takeaway with this weapon is that it is completely useless at medium- to long-range. That’s why you shouldn’t prioritize using it, especially in Warzone. It should serve as a backup or last resort when in close proximity to an enemy. In close-quarters encounters, it’s an absolute monster and can take enemies out in a couple hits, even in Battle Royale. If you know you’ll be entering a close-quarters engagement with an enemy, we recommend switching to your Snake Shot Akimbo .357 Magnums to secure the kill. Otherwise, don’t focus on using them.

To use them effectively, we advise pulling the left and right triggers at the same time. Doing so will allow for two shots to come out at once, making them twice as effective. In Battle Royale, it’ll likely take a couple of shots from each .357 to secure the kill, so be prepared to pull the trigger more than once.

In the clip above, you can see how close you must be to an enemy in order to use the weapon. Do keep in mind that the footage is from a multiplayer match — so the time to kill is much faster than it would be in Warzone. Still, you can see how to effectively use this version of the .357. In Warzone, it will take more hits to secure a kill than in regular Modern Warfare multiplayer. If you aim for the chest and above, you’re much more likely to take out your enemies quickly, though this is not always plausible. We recommend throwing a stun at an enemy first or weakening them from afar with a different weapon before rushing in to secure the elimination.

The other thing to consider is the reload time. The .357s take around a second to reload, which doesn’t sound like much, but in the heat of battle, can make a tremendous difference. Because of that, you’ll want to be clever and deliberate when you reload. Sometimes, it’s best to wait to reload, especially if you know someone else may be nearby. When your weapon isn’t at full ammo, it can be super tempting to reload, but oftentimes, this is when an enemy will pop out to finish you off, so only reload if you know it’s safe to do so.