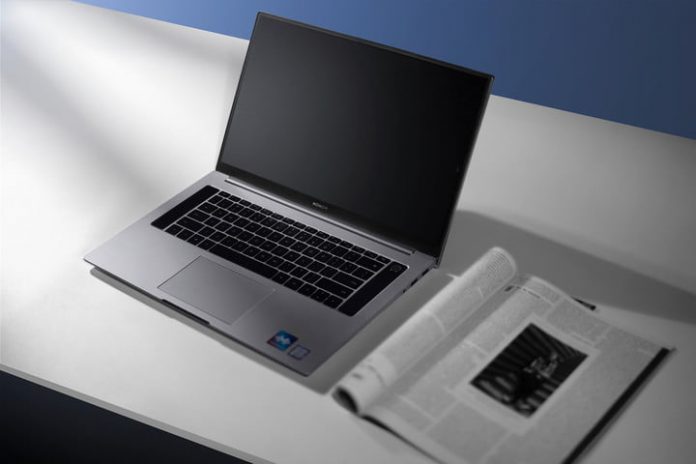 While doubt continues to hang over its smartphone business due to restrictions in the U.S., no such problems seem to dog Honor’s laptop business, as the brand has launched three new models, the MagicBook Pro and updated versions of the MagicBook 14 and MagicBook 15. All three use AMD’s Ryzen 5 processors and feature sleek designs.

The MagicBook Pro, unveiled at IFA 2020, is the top-of-the-range model with a 16.1-inch Full View screen surrounded by a 4.9mm bezel. It boasts a 90% screen-to-body ratio, plus 100% sRGB color gamut at 300 nits brightness and flicker-free performance. The sandblasted aluminum chassis is 16.9mm thick and weighs 1.7 kilograms.

Inside is AMD’s Ryzen 5 4600H processor with an integrated Radeon graphics card, and the laptop can be specified with up to 16GB of DDR4 RAM and a 512GB SSD. Honor promises the MagicBook Pro will keep cool under pressure thanks to its dual-fan and dual-heat pipe cooling system design, while the battery will return 11 hours of use before needing a recharge. A 65-watt fast-charging system boosts the cell to 50% in about 30 minutes. Other features include a fingerprint sensor set inside the power button, a pop-up webcam inside one of the function keys, two USB 2.0 ports, a USB Type-C port, and an HDMI port too.

The MagicBook Pro is joined by a new MagicBook 14 and MagicBook 15 laptop, which retain the same design as the models released earlier this year, but with new AMD Ryzen 5 4500U processors and the option for a 512GB SSD. Otherwise, these lightweight, low-cost laptops remain the same, but that’s no bad thing.

Honor has not announced the price for any of its new laptops yet, or where they will be released. Previously, the MagicBook 14 started at 499 British pounds, or about $667, making it a good value. Expect them to be available in the U.K. and Europe, but not the U.S. unless you’re willing to import one. We’ll update this story when Honor confirms the prices.