Home How to Fortnite season 4 week 5 challenge guide: How to make a Stark...
How to 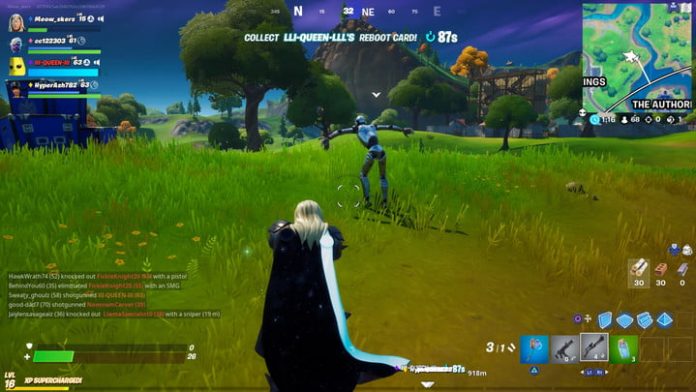 The latest batch of Fortnite challenges is available now as part of season 4, week 5. This week’s set of challenges aren’t too tricky, but some do require you to know the locations of specific, unmarked areas on the map. One challenge requires you to make a Stark Robot dance, which might be causing you trouble since the game doesn’t outright tell you how to do so. Not to worry, as we’ve got all the tips and tricks you’ll need to complete this challenge in just a few minutes of playing, including the locations of the Stark Robots, how to make them dance, and strategies to avoid getting eliminated in the process.

Here’s how to make a Stark Robot dance in Fortnite.

Where to find Stark Robots

There are a couple of places to find Stark Robots around the map. The most straightforward method is to search for them at Stark Industries — though, keep in mind that this area is usually very busy. You can find Stark Industries in the northern portion of the map, inside a massive circle. Generally, we recommend that you avoid going here since it gets chaotic quickly and an enemy can easily take you out while you’re trying to complete the challenge.

The other way you can find them is by going to a Quinjet Patrol, which are jets that land in random areas around the map, guarded by the Stark Robots. At the start of a match, while you’re still on the bus, you’ll see several jets fly past you that will then settle in various locations and are indicated by blue smoke. You can also spot the Quinjet Patrols on your map by a white jet icon. If you’re going to use this method, try and land at one of the Quinjet Patrols that are far away from the busy areas to avoid running into other players. From our experience, going to the farthest one is usually the best idea.

Whichever method you use, you’ll want to look out for the tall, silver robots that are hostile toward you, so make sure you come prepared with a weapon. You’ll likely find some decent gear at Stark Industries, but it’s a high-traffic area and you’ll need to watch out for other players. If you choose the Quinjet Method, try landing at a building nearby to grab some loot before heading in to take out the Stark Robots.

How to make a Stark Robot dance

Once you’ve found the Star Robots, you’ll need to take one down and hack it. Depending on the weapon you have, this is easier said than done. With a shotgun, you can down a Stark Robot in just two hits, but if you’ve got a weaker weapon, it will take more to bring one down. At the Quinjet Patrol, it’s recommended to down all of the Stark Robots so they don’t interfere while you’re trying to hack one of them.

After it’s clear, hack the Stark Robot. When it reanimates, use an emote by pressing and holding down on the d-pad and selecting the emote of your choice. If you do it close to a Stark Robot that has been hacked, it will respond by dancing back at you. As soon as the Stark Robot dances, you’ll get credit for completing the challenge. In the video above, we did get credit for the challenge, even though it doesn’t appear like the robot was dancing.

The hardest part is getting to the point in which you can hack the robot. That’s why we recommend avoiding Stark Industries if you’re strictly going for this challenge since that area can be tough to get through due to how many people tend to land there. One tip we have is to bring a friend with you — they can help you down the robots and watch your back in the process. With this being a new challenge, players tend to flock toward the robots’ locations, so they might be busier than usual.

Another thing you should be aware of is that it can sometimes be tricky to get the robot to dance if there are other enemies nearby. When they’re hacked, they prioritize taking out enemies around you, so you should make sure the area is clear before getting them to dance. Once it’s clear, spam the dancing emote, and you’ll eventually get credit for it, even if it doesn’t look like the robot actually danced.

Future gaming technology trends we should expect in 2021

Every decade there is a change of trends in video games. According to the marketing and sales specialists, by 2021 the gaming industry will see a new transformation.Trend 1: Introduction of 5GAt first glance, the transition from 4G to 5G does not seem so important. But what does this mean for gamers? Mobile games have always been limited by the latency of the Internet. Currently, this is about 10 milliseconds on 4G tech. For the average user, this may seem like a very small number, but for games – it’s an eternity. For more information, see androidappsforme.With 5G, Internet latency will be reduced to one millisecond, which will open up new opportunities for gamers. 5G data transfer speed will open up incredible opportunities for gaming and entertainment. Widespread use of 5G will begin around 2021. Thanks to this, mobile games will show an even faster pace of development.For example, over the past 40 years, about 1.5 billion game consoles have been sold. And over the past 10 years, more than 2.2 billion people have used smartphones to play games.Trend 2: The spread of the realities of AR and VRAlso, augmented reality (AR) and virtual reality (VR) will change.Since the creation of virtual and augmented reality, games have gained a truly immersive experience and a new perspective on the future of the gaming industry.In 2016, VR and AR raised $1.8 billion and $1 billion respectively; in 2021, these figures are projected to be $19 billion and $20.3 billion.The development of AR and VR proves that they are an integral part of the gaming market.Trend 3: Age categories of gamersIn addition to changes in technology, the portrait of the gamer as a whole is changing.While previously only a teenage boy was considered a gamer, today 45 percent of American gamers are women. And the average age of a player is 34 years. People play everything – from simple puzzle games to deadly shooters.By 2021, the Millennials (a generation of people born in 1982-2004) will reach its peak of purchasing power and become the main part of gamers.Trend 4: StreamingIf you find it silly and boring to watch other people play video games, you should reconsider your opinion. Thanks to streaming, video games have gained popularity in eSports.While the player base has grown by an average of 10% a year since 2015, the viewership base has doubled. In 2017, total eSports revenue was $655 million. In 2021, this figure will approach $1.6 billion.Trend 5: Gamification as attracting customers to storesSince various stores are constantly under pressure from the competition, they are looking for new solutions that would help them bring customers back to the shopping centers. Therefore, in this area, gamification solves two problems – attracting and retaining users. To increase interest in the project, the following must be present: status, new content, and free products. Within the game concept, higher levels, rewards, and belonging to a particular group or clan are valued.Especially for the Y generation – young people aged 18-27 who are more used to gamification. That is passing stages, tasks, and improving the level.For example, the Japanese retailer PARCO rewards customers with “coins” and discounts if they visit certain points or interact in any way with the store and the store’s app.Trend 6: Game data analysis will make games more profitableIn 2016, the Survios Studio used statistical data to understand player behavior. This helped them create the Raw Data shooter, which became exclusive to virtual reality helmets, earning $ 1,000,000 in a month.Data analysis for the game was done by the CDP platform, based on the player’s behavioral data, find out the answers to questions:Do gamers complete the game or stop at certain levels?Where do players prefer to launch games? In the Steam store or via Oculus?Do players choose HTC Viva or Oculus Rift?Are the players right-handed/left-handed?Do players return to the game and how much time they spend on games?Game manufacturers are trying to figure out what exactly will be the next popular trend in the gaming world using CDP data. This helps collect data about players and understand what they like best.EDITOR NOTE: This is a promoted post and should not be viewed as an editorial endorsement.
Read more

Boost Mobile on Friday announced a limited-time rate plan which could kick off an interesting season of competitive options.Available immediately, and running through the end of the year (December 31, 2020), Boost’s new offering is just $10 per month and includes unlimited talk and text, plus 2GB of high speed data.Additionally, it offers a $15 plan that doubles the data. Indeed, that’s 4GB of high speed data per month. Most carriers tend to price their plans around twice that, or approximately $30 per month.The Catch?What’s the fine print? There are two caveats to consider. First, the plan is only available to new customers who bring their own phone to the service.Also, after the three-month promotional period, Boost subscribers on the $10 plan will receive 1GB of high speed data; those on the $15 plan will receive 2GB of high-speed data.For those who don’t follow the wireless space all that closely, Boost offers five rate plans that cost less than $50 per month. Among them are the $10 (1GB) and $15 (2GB) option.
Read more

The top 10 most brutal iPhone torture tests of all time

The arrival of a new iPhone this week means more crazy stress test videos are just around the corner. Here are our picks of the best from over the years.
Read more