Home How to Fortnite season 4 week 5 challenge guide: Collect floating rings at Coral...
How to 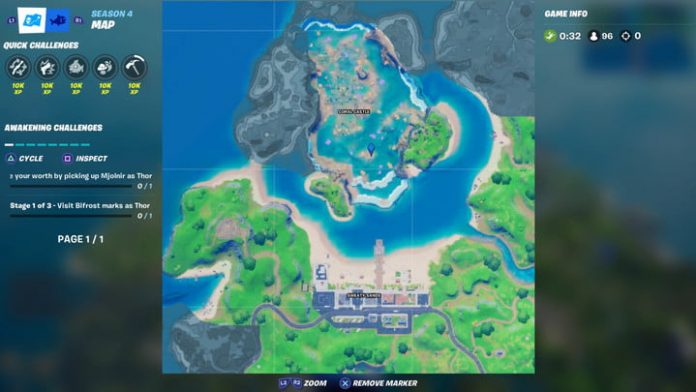 Most weekly challenges in Fortnite feature at least one scavenger hunt, and week 5 of season 4 is no different. This week features a challenge for collecting four floating rings at a location called Coral Castle. The rings are not marked on the map, but luckily there are only four of them to collect, so it’s a quick process. In this guide, we’ll show you where to find all four of them and give you tips and strategies to make it as easy as possible for you to finish this challenge.

Here’s how to collect floating rings at Coral Castle in Fortnite.

Where to find Coral Castle

Coral Castle is a massive area in the northwestern portion of the map, and, thankfully, it is labeled. Use the image above for reference. The four rings you’re looking for are spread out around this location, on top of the roofs of the various structures throughout the area. They’re located in the south, middle, north, and northeast. To make this go more smoothly, we highly recommend coming to this area in a helicopter. Otherwise, you’ll need to bring enough wood with you to reach the tops of each building, which can be a pain. You can grab a helicopter in many places, but we usually use the one on the island to the north of Misty Meadows.

Where to find floating rings at Coral Castle

This is the southernmost ring and can be found atop a gold, dome-shaped roof.

The next one is in the center area and is found on top of a building by an orange piece of coral.

The third ring is to the northeast of the previous one, atop another building with a brick roof. This is the easternmost building of the area.

The final ring is to the northwest of the previous, at the top of a tall structure with no roof. You’ll find it in the opening of the structure, in the center of four inclines that resemble an upside-down pyramid.

Below, we’ll include a video of the locations of each floating ring. Note that the first one doesn’t appear since we grabbed it in a previous run, but we still show where it is by touching down on the roof with the helicopter.

If you die before being able to grab all four, the game will save your progress, so you can come back and pick up whichever ones you missed in a separate match. From what we’ve seen, this area is a bit busier than normal due to the challenge, but if you come prepared with a helicopter, you’ll have a much easier time since you’ll be able to quickly grab all four rings.

Get moving and track your progress with these incredible fitness trackers!

If you're looking for a fitness tracker that does it all, we highly recommend the Fitbit Versa 2 for its
Read more

Plan your retirement in minutes with Plynty: save 82% on a lifetime subscription

We all know that it's important to plan for retirement. But actually sitting down to make a plan can seem
Read more

Best answer: Yes, nationwide 5G is available on all of the big three carriers, with many prepaid carriers are also
Read more