Home How to Fortnite season 4 week 4 challenge: How to hack Stark Robots at...
How to 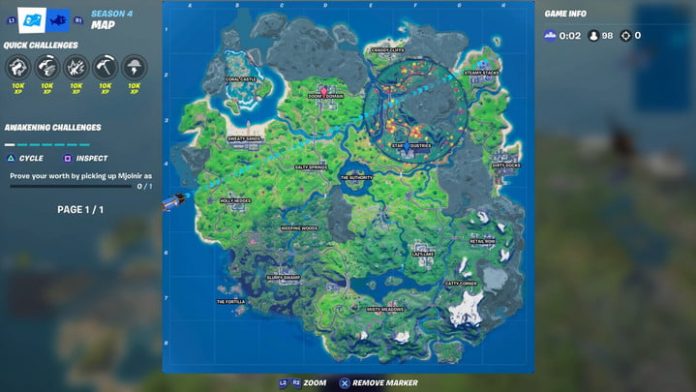 Season 4 week 4 of Fortnite is upon us, and it comes with yet another set of challenges for you to complete. While many of them are straightforward, there are a few that might be giving you trouble. One such challenge is the one for hacking five Stark Robots at Stark Industries — which is easier said than done. You might recall just how chaotic Stark Industries can get, as evidenced by one of the season’s earlier challenges for defeating Iron Man at this same location.

Where to find Stark Industries

Firstly, you’ll need to locate Stark Industries on the map. Thankfully, it is marked and can be found in the northeastern section of the map, on the southern end of a massive circle. Again, this is a high-traffic area, so you’ll need some luck if you want to complete this challenge. We recommend that you survey the area as you make your way down — watching for enemies, weapons, and the Stark Robots.

If you see an area at Stark Industries that is full of enemies, it’s a good idea to go to a different spot to be safe. In many cases, avoiding enemies isn’t possible, but do your best to land away from them, if possible. Your first priority should be to get a weapon, so keep an eye out for chests as you land. The Stark Industries building to the south of this area has a chest on the third-floor balcony, so landing here is a good option.

How to hack Stark Robots at Stark Industries

As soon as you find a decent place to land, grab your weapon and any other gear that will help you. A shield is never a bad choice, along with some health and ammo. After that, make a beeline for one of the Stark Robots, which are artificial intelligence-controlled enemies that are found patrolling the area. They pack a punch, so do your best to go for headshots when attempting to take them down. What you need to do is down them and walk over to them to initiate the hack. On PlayStation 4, press and hold the Square; on Xbox One, press and hold X; and on Nintendo Switch, press and hold Y to hack.

Once you’ve completed the hack, they’ll become friendly, and they’ll shoot other enemies nearby. Since this area is so busy, you likely won’t be able to hack all five Stark Robots in one go. From our experience, it took a few games to hack all five, simply due to the amount of competition nearby.

In the video above, you can see that we completely avoided the main Stark Industries building since it’s such a high-traffic area — especially with the all-powerful Iron Man guarding the place. To ensure you’re safe, we highly suggest bringing a friend along to help out, so they can at least watch your back and take out other players. Remember, you don’t have to down the Stark Robots yourself, so pay attention to see if another player is shooting at a robot while you’re at Stark Industries.

On one attempt, we got lucky and managed to take out an enemy who had just downed a Stark Robot, so we were able to quickly rush in and hack them with ease. Your millage will vary based on where your opponents land in conjunction with the spawns of the Stark Robots (which tend to change from match to match) and the locations of useful weapons.

Unfortunately, the Stark Robots don’t seem to spawn in Team Rumble mode, so you’ll have to either try it in solos, duos, or squads. As a final piece of advice, try and shoot at the Stark Robots from afar, because they won’t engage with you if you’re far enough away. We recommend that you start shooting at them from far away and get closer as you deal more damage. By the time you’re close enough, they’ll be so weak you won’t have to worry about being taken out by them. Just make sure another player doesn’t “steal” your kill.