Home How to Fortnite season 4 week 3 challenge guide: How to deal damage with...
How to 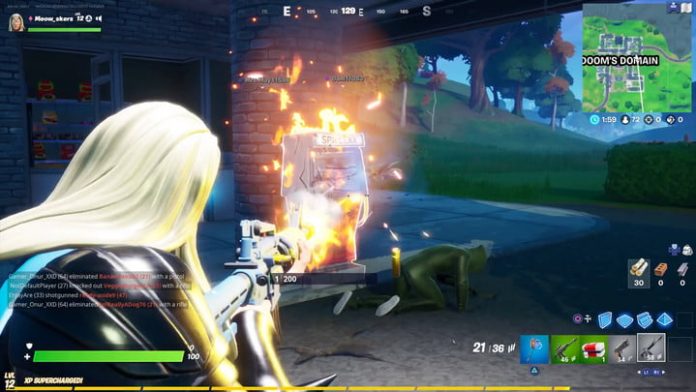 Week 3 of Fortnite‘s season 4 is upon us and, as always, a new set of challenges is available to complete. One of them requires you to deal 250 damage with exploding gas pumps or gas cans. It’s a straightforward premise, but actually executing it is a different story. The nice thing about this challenge is that it offers a lot of flexibility with how you can go about completing it. Though, if you’re stuck, you’ve come to the right place.

In this guide, we’ll walk you through the easiest ways to deal 250 damage with gas cans and pumps, and we’ll provide essential tips to make it go as smoothly as possible. Here’s how to complete Fortnite’s challenge for dealing damage with exploding gas pumps or gas cans.

As mentioned above, there are multiple ways to go about completing this challenge. Thankfully, you don’t have to deal damage to actual players to get it finished — instead, you can deal explosive damage to henchmen around the map. With that in mind, the easiest method is to down a henchman, carry them over to the gas pump, and shoot at it to get it to explode. This won’t deal all 250 damage in one go, but it’s a safe method that can be completed over the course of a couple of games.

As you can see in the video above, we opted to land on the east side of Doom’s Domain, close to the gas station. When you land, immediately try to find a weapon so you can take down an enemy player or henchmen. Once you down them, pick them up with triangle on PS4, Y on Xbox One, or X on Nintendo Switch. From here, you can carry them over to the gas pump and place them down beside it. Keep in mind, the henchmen tend to spawn at random locations, so if you have to keep trying this method, you’ll need to be somewhat familiar with the area. Henchmen tend to spawn by the large statue in the middle of Doom’s Domain, and patrolling by the houses. The nice thing about Doom’s Domain is that it’s relatively calm since most players have moved on to Stark Industries to work on another one of this week’s challenges, so you’ll likely only have to deal with henchmen if you use this method.

Once you’ve got your hands on an enemy, the tricky part is knowing where to place them, since they can actually crawl away before the pump explodes. We recommend setting the henchmen down right next to the pump you’ll be shooting, but if they start crawling toward the other pump before the first one explodes, either pick them up and move them back, or start shooting the one they’re crawling toward. It’s best to use an automatic weapon to ensure you can destroy the pump quickly while the enemy is still nearby. Also, don’t worry about taking damage from the explosion yourself. If you stand 10 to 15 feet from the pump, you should be fine, even if you get hit a little. We recommend you start shooting as soon as you set them down and back away as you fire so the explosion does less damage to you.

In essence, you want to make sure you cause the pump to explode while the henchmen is still nearby. On one attempt, the weapon we were using wasn’t powerful enough to blow up the pump in time, and the henchmen crawled away and died before the explosion went off. If this happens, you can try to find another location with a gas pump, or a gas canister. There are plenty around the map, but Doom’s Domain is the best place since there are so many henchmen nearby. If you pull it off using this method, you’ll likely deal around 70 damage with the explosive, so it’ll take a few more tries after that.

Another way you can complete this challenge is by using a gas can, which are found around the map, inside buildings, and by bus stops. We found a great spot that has a gas can to the west of Lazy Lake in the garage of a small building. If you just play normally, keep an eye out for the gas cans and be ready to use them if you come across an enemy.

The method we used was to down an enemy (either a real player or henchmen), place the gas can nearby, and shoot it to get it to explode, causing damage to the enemy. This method works great, especially if you’re a decent player who can down enemies quickly. If you don’t have a great weapon on hand, this might be more of a challenge, so it’s best to wait until you’re equipped to try it.

In the video above, you can see how quickly we were able to pull it off. The main thing you want to watch out for — like the last method — is that the enemy is close enough to the gas can to take damage from its explosion. That’s why we threw the can in front of the enemy, so they’d sort of crawl toward it. The gas canisters are way easier to destroy than the gas pumps, so this method might in fact be better for you. Just make sure you don’t accidentally kill the enemy while shooting the gas can.

You can experiment with other ways to get this challenge finished, but these two methods are by far the easiest. It took us two attempts — the one at the gas pump in Doom’s Domain, and the one shown above — to finish this challenge, and after you’ve dealt 250 damage with explosive gas cans or pumps, you’ll get credit for completing it and earn 10,000 XP.