Home How to Call of Duty Warzone: How to get Sheet Lightning
How to

Call of Duty Warzone: How to get Sheet Lightning 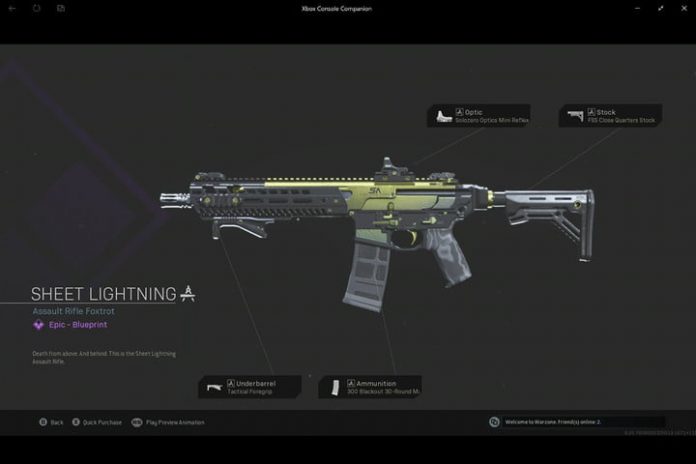 One of the most popular guns in Call of Duty: Warzone is the M13 assault rifle, better known as Sheet Lightning. Assault rifles are fairly popular because they’re often the most balanced weapons in the game. They’re highly effective when used at mid-range and are able to deal decent damage against enemies.

There are two ways to find Sheet Lightning. However, there is only one way to keep it. Both ways of obtaining Sheet Lightning are worth mentioning because even though the two weapons are the same, they have different advantages from one another.

M13s and why to use them

Sheet Lighting is an epic tier assault rifle that, but at its very basic, it’s an M13. The M13 assault rifles have quickly become the fan-favorite weapon of the series. It’s easy to control at all rankings, which makes it one of the most consistent ARs to use in the game. They can dish out some good damage with a slightly lower rate of fire than the M4A1.

Overall, M13 assault rifles can be some of the most powerful weapons in the game. Their overall firepower and ease of control make it a go-to weapon for many Call of Duty: Warzone players.

How to get Sheet Lightning

To find the blueprint, simply click Weapons > Loadouts. From here, you can select any of your loadouts, then hit Primary Weapon. Select Assault Rifles and hover over M13. The store icon should float out to the left of M13. From here, you’ll be able to purchase the Heavenly Aim pack.

This version of Sheet Lightning is the standard version that streamers are playing with. This blueprint comes with optic, stock, underbarrel, and ammunition attachments, and is notably different from what players in Call of Duty: Warzone will find in crates on the ground.

Another way to find Sheet Lightning is to be lucky enough to find it in a drop. Season 3 has introduced new drops to the game in crates, and one of them is Sheet Lightning. Unfortunately, you won’t be able to keep the weapon in your inventory for future games. The world drop Sheet Lightning comes with a thermal sight early on, which has a different advantage than the blueprint version. With the thermal sight, you’ll be able to see enemies who don’t have the Cold Blooded perk yet.

Facebook
Twitter
Pinterest
WhatsApp
Previous articleNokia refreshes portfolio with three phones, earbuds, and a speaker
Next articleHow to track your stats in Call of Duty: Warzone