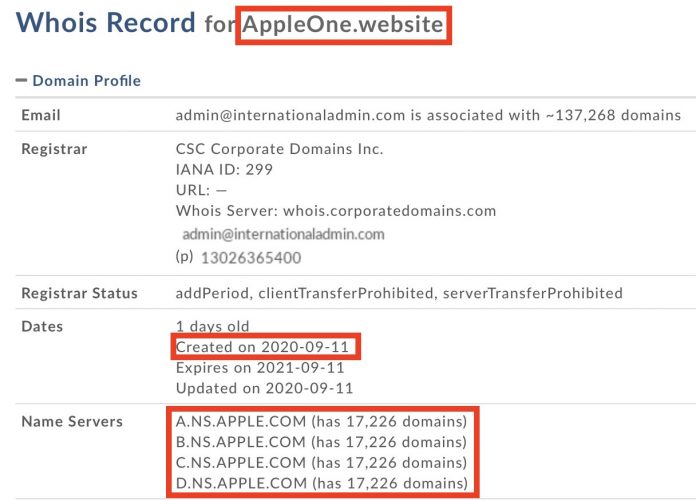 Just a day after strings in Apple’s own Apple Music app for Android suggested that the company’s upcoming subscription bundle will indeed be called “Apple One,” Apple acted to register a number of domain names for the term. The move further indicates that Apple One is likely to be the marketing name for the bundles rather than a placeholder.

While Apple will likely not end up using many of the domain names, it is typical for the company to secure numerous variations in order to ensure that others do not have control of them.

Among the “Apple One” domain names registered by Apple yesterday:

Full contact information on the domain registrations is redacted for privacy, but given the significant batch of domains and the fact that all of them are pointing to Apple’s nameservers, there is essentially no doubt that Apple is responsible for the registrations.

Apple has been able to register a number of less common versions of Apple One domains, but it does not yet control several of the most popular ones such as appleone.com and appleone.net. Both of those domains have been registered by others for well over a decade, and it remains to be seen if Apple will make an attempt to acquire them.

Apple may have some difficulty with appleone.com, which is the home of a fairly large employment agency, while appleone.net is currently parked and listed as available for sale.

The Apple One bundles, which could appear as soon as Tuesday’s event or else alongside new iPhones next month, will involve several tiers of Apple’s existing services offered at a slight discount. A basic package is expected to offer ‌Apple Music‌ and ‌Apple TV‌+, while a second tier will also include Apple Arcade. A third bundle tier will include all of the aforementioned services along with Apple News+.

There will also be a higher-end tier that includes ‌‌Apple Music‌‌, ‌‌Apple TV‌‌+, ‌‌Apple Arcade‌‌, ‌‌Apple News‌‌+, and iCloud storage, and there may also be a new fitness-oriented service that offers virtual fitness classes.Tag: Apple One
This article, “Apple Registers Multiple ‘Apple One’ Domain Names Ahead of Tuesday’s Event” first appeared on MacRumors.com